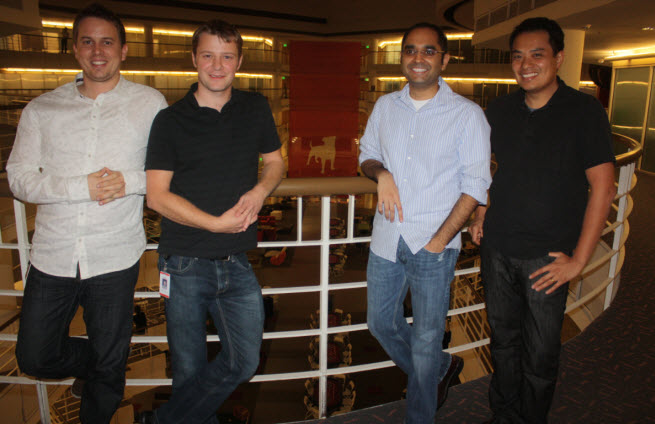 Zynga hasn’t had the easiest time in the last six months. But that doesn’t mean it hasn’t been busy behind the scenes. The social gaming giant is revealing today that it quietly acquired a small mobile game studio called November Software, which is working on a new type of game that could bust open a new market for Zynga. 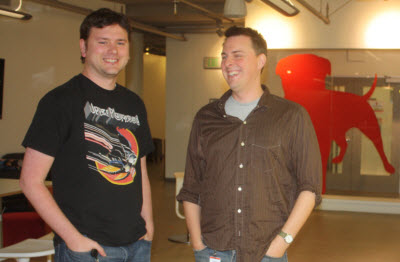 Together with its acquisition of developer A Bit Lucky in September, the deal shows Zynga’s determination to move into the “midcore” market for mobile social games. The midcore market sits between the hardcore gamers who play on high-end PCs and consoles and the casual gamers who play mass market games with lightweight, short-duration content.

It is potentially a way to shore up profits, since midcore players stick with their games for a longer time and spend more money than casual gamers, who make up the bulk of Zynga’s 300 million users. Much smaller companies such as Kixeye and Kabam have built large businesses with hundreds of employees by focusing on midcore games, which are more accessible to a wider group of players than hardcore games.

“Midcore is about games for people like me who used to be hardcore gamers but don’t have the time anymore,” said Justin Cinicolo (pictured right in black shirt), the vice president of mobile at Zynga and the overseer of the acquired team, in an exclusive interview with GamesBeat. “You can get a sense for depth and strategy in these games, but in five minute chunks. I’d love to play Halo 4 with my buddies, but we just have no time.”

Cinicolo worked on Zynga’s signature midcore game, Mafia Wars, and his mobile game studio wanted to get back to its roots in midcore games.

“We were passionate about going into the midcore space and raw competitiveness,” Cinicolo said. “This is about kicking somebody in the face and saying you’re better than them. But it’s not about getting your mom to play Halo. It’s about games with strategic depth that we can make more accessible.”

Empires & Allies and Mafia Wars 2 fit these descriptions. But Mafia Wars 2 didn’t quite meet expectations. It got millions of users, but Cinicolo acknowledged that it didn’t meet the expectations of Zynga chief executive Mark Pincus.

In the meantime, Zynga saw far more success in its Ville series of games such as FarmVille, a simpler farm simulation game for casual players, and CityVille. Only recently, the Ville series has had mixed results. And so it makes sense for Zynga to diversify into other categories and genres such as midcore.

“The thirst for these kinds of games has resurged in the last year,” said Jon-Paul Dumont (pictured above in brown shirt), the executive producer for mobile games at Zynga.

“They were passionate gamers with a really good vision, not just for the technology but the game as well,” Cinicolo said.

Battlestone is a fantasy-themed game is an action role-playing title that uses the touchscreen controls of a smartphone or tablet. One of the impressive things about it is its fast-moving 3D graphics. Swistun said in an interview that his team decided to create their own 3D engine that worked well on mobile by streaming cool imagery without using up a huge memory footprint. That will enable the creative teams to create cool 3D graphics that run at high speeds. It previously went under a code name, Golden Arrow, and it promised to stretch the processing power of Nvidia’s Tegra chips to the limit.

November Software formed in January 2011 to produce console-quality games on mobile. It started work on the engine and then created a game that would exploit it.

Inside Zynga, Cinicolo added more firepower to the team, including bringing in experienced Mafia Wars developers. They helped with ideas related to the business model of free-to-play gaming, where users play for free and pay real money for virtual goods. Swistun showed how his team set up an impromptu motion-capture studio within a commandeered Zynga conference room. He hopes to create a beautiful game that runs faster than other mobile titles. And he wants to be able to create content quickly without building up a huge team.

Zynga also published games made by third-party developers, and more than half of the titles fit the midcore description. But Swistun said he didn’t want to work in a hands-off way. He wanted to be locked into Zynga’s resources and its upper management, so it made sense to be acquired. The team made contact with Zynga executives including Steve Chiang, Ben Jones, Linda Kim, and David Ko. It fit so well with Zynga’s plans that the acquisition happened earlier this year.

Cinicolo said, “They relit the spark in us.”

While Zynga lost money for the past couple of quarters, Swistun said, “I feel like we are sheltered. We love what we are doing and are making huge progress. We don’t pay attention to the stock ticker.”

You can expect that Zynga will produce more midcore games in the future. It has hired more than 150 seasoned game designers, including talent such as Mark Turmell (Smash TV), Soren Johnson (Civilization IV), and John Tobias (Mortal Kombat). Cinicolo said that you don’t hire these folks without planning to use them to their full capabilities.

“Some people identify themselves as farmers,” Dumont said. “Some identify as warriors or gangsters. We want to create something for them.”

You’ll be able to play November Software’s Battlestone in the not-so-distant future, but no launch date is set yet.