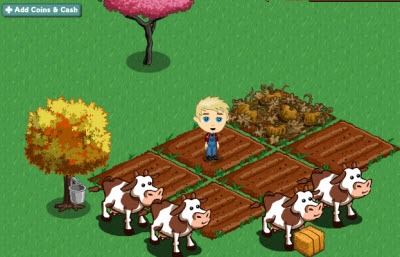 The New York Times first reported the news, but it has since been confirmed by Zynga.

The investment no doubt gives Zynga a stratospheric valuation, and it shows that global investors are closely watching the social gaming industry that is profiting from giving away games for free and collecting payments for virtual goods purchases.

It also shows how much clout the company has accumulated in just a couple of years on riding the social gaming craze on Facebook. Other investors include Tiger Global, a New York hedge fund, and venture firms Institutional Venture Partners and Andreessen Horowitz.

How could Zynga be worth so much money? Consider that FarmVille, a Facebook game launched in June, now has 72.9 million monthly active users. Facebook makes money from the ads wrapped around the game. And Zynga makes money whenever impatient players decide they need to buy something like a tractor to make more progress in the game. This so-called virtual goods business model took off in 2009, generating revenues for Zynga that are rumored to be about $250 million. The company has 712 full-time and part-time employees and it’s profitable.

And that’s probably how the Russians did their math and came up with a valuation. The New York Times cited finance experts who figure the value could be anywhere from $1.5 billion to $3 billion. Besides FarmVille, Zynga has a bunch of other popular games: Cafe World, Mafia Wars, FishVille, YoVille, and Texas HoldEm Poker. All of Zynga’s users add up to 232 million monthly active users, a figure that is growing every week.

By comparison, Playfish, the No. 2 company on Facebook, has 59 million users. And Electronic Arts just bought them for as much as $400 million.  EA bought Playfish because it didn’t succeed at breaking into the Facebook game market, where companies tweak their code almost every week, treating games as a service to feed the wants of users.

As with Facebook, DST is buying shares not only from the company, but from employees as well, allowing them to cash out of their holdings in Zynga before the company has any kind of initial public offering. There’s some interesting details on this employee stock purchase plan on Inside Social Games, though some of the information was incorrect.

Previously, Zynga raised around $55 million from investors including Kleiner Perkins Caufield & Byers, Union Square Ventures, Foundry Group and Avalon Ventures. Those investors did not invest in this latest round.

This deal will likely allow Zynga to keep growing fast while putting off its IPO for a time.

“The opportunity every quarter is proving to be bigger than we imagined and we always thought it was prudent to keep adding to the capital of the company as we grow,” said Mark Pincus, Zynga’s founder and chief executive, to the New York Times.