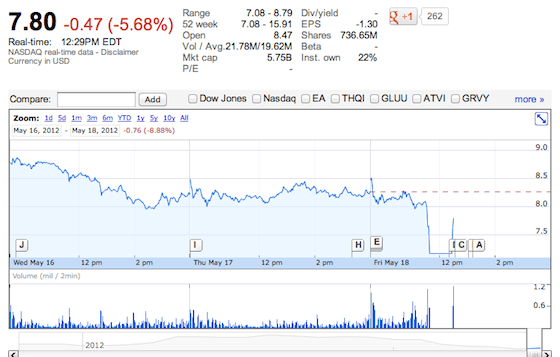 Zynga’s stock hit a new low of $7.17 a share, and trading was halted on Friday. It resumed later that day and shares rose, but was halted a second time within the same day as stock went up.

Morningstar analyst James Krapfel, told Marketwatch, “It’s not too surprising that Facebook’s less than spectacular debut is having negative secondary effects on social media companies such as Zynga.”

Zynga is highly dependent on Facebook, as that’s where the majority of its games are distributed, and the companies have had a close relationship for years. However, other tech stocks were also hammered in early trading today. It might just be that a lackluster debut by Facebook has made everyone extra nervous about holding onto their internet stocks. If so, however, Zynga’s stock is taking the brunt of the beating.