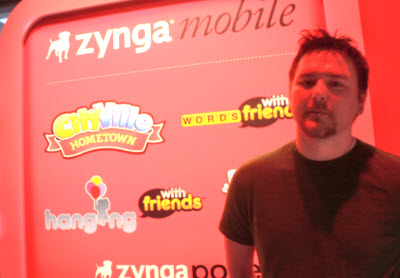 No single game maker dominates smartphone and tablet games the way Zynga is dominating social games on Facebook. But now Zynga may have its sights set on dominion over the mobile market too.

The company is stepping up efforts to penetrate the mobile market. That was evident when Zynga announced five new mobile games at its press conference this week in San Francisco. Mobile could be a bigger market than Facebook games, so Zynga has to grab market share in that market in order to keep growing fast, diversify beyond Facebook, and continue executing well prior to going public.

John Schappert, chief operating officer at Zynga, said at the event that mobile is critical to the mission of reaching gamers wherever they are.

“We’re building games for every player and every device they want to play on,” Schappert said.

If Zynga wants to go public, mobile is also one of the prime areas where it has to execute, said Peter Relan, chief executive of CrowdStar, a rival social and mobile game maker.

“They are still very early in that market,” Relan said. “It is fairly experimental at this stage, and is not a major market for them.” 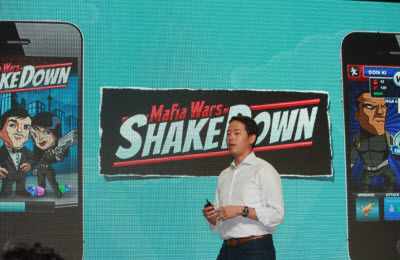 The job of breaking into mobile falls to leaders like David Ko (pictured below), chief mobile officer, and Justin Cinicolo (pictured above), general manager for mobility at Zynga. This week, they announced Mafia Shakedown and Dream Zoo as upcoming native mobile games. And they also showed off three new HTML5 mobile games: Words With Friends, Zynga Poker, and FarmVille Express.

The HTML5 games are intended to be cross-platform titles, running on any mobile device with a web browser. But most successful mobile games have to be optimized for the native formats of different mobile devices, such as Android phones or iPhones. That raises the costs of mobile development.

Zynga has a lot at stake here. In its IPO filing with the Securities and Exchange Commission, one of the risk factors says, “Our growth prospects will suffer if we are unable to develop successful games for mobile platforms.” Zynga expects to devote considerable resources to its mobile game development, where its experience of making Facebook games may not be all that useful.

But invest it must. Games are the most popular activity on smartphones. And the free-to-play business model is generating solid returns for mobile games, which are often given away for free in the hopes that users will purchase virtual goods.

Gaining market share won’t be easy with big competitors such as Gameloft, Electronic Arts, Rovio, Ngmoco, Digital Chocolate, Glu Mobile, Big Fish Games, Disney Mobile, Storm8, Pocket Gems, and a long list of others vying for a piece of the pie. Zynga is late to the party. In fact, Zynga dove into iPhone games early on but pulled out when it found it much more lucrative to put teams to work making Facebook games.

Acquisitions such as the $53 million purchase of Newtoy, maker of Words With Friends, have put Zynga back in the mobile ring. And Zynga has also said that it believes most mobile games haven’t been very social to date and that it will have an edge in creating games that are fundamentally more social. In Mafia Wars Shakedown, for instance, you’ll be able to steal from your friends, Ko said. And in Dream Zoo, you can manage a zoo and feed and clean the animals in your friends’ zoos.

At some point, Zynga’s 265 million monthly active players on Facebook will help it gather a bigger mobile audience, since Zynga expects to unify its mobile and social games through its own social game platform, dubbed Project Z, which is coming sometime soon.

Zynga still has a lot of cash to spend on acquisitions. As of June 30, the company had $964 million in cash. And it generated $18 million in net income on revenue of $522 million for the six months ended June 30, compared to net income of $20 million on revenue of $231 million a year earlier. The company’s biggest mobile hits so far have been Words With Friends and Hanging With Friends, which have dominated the word game category in the App Store. But Zynga doesn’t yet break out mobile game revenues.

Before the new introductions, Zynga had four games on Android, four on the iPad, and nine on the iPhone. You can expect those numbers to change a lot in the coming years.

Here’s our video interview with Zynga’s Cinicolo below.