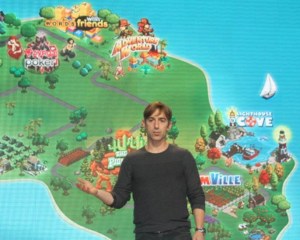 Social games company Zynga’s stock ended its second day of trading on the Nasdaq exchange down nearly 5 percent, a signal of turbulent times ahead for the value of the company.

Zynga’s stock closed on Friday at $9.50 a share, down 50 cents from its IPO price of $10 a share. The weak performance came after a strange combination of hype and criticism for the gaming company, which raised $1 billion at an $8.9 billion valuation with options included.

At the end of trading Monday, Zynga’s share price closed at $9.05. The stock hit a low in mid-day trading at $8.75 a share. In added context, the entire Nasdaq exchange ended the day in red with a loss of 32 points, or down 1.26 percent from Friday’s close.

PrivCo, a private market research firm headed by Sam Hamadeh, told us at the end of last week that Zynga made several missteps with its IPO that will likely continue to dog the stock. PrivCo’s chief complaint was that the percentage of shares offered by Zynga in its IPO was not restricted to less than 10 percent as LinkedIn and Groupon’s were for their IPOs. PrivCo also felt that Zynga’s long-term commitment to Facebook, which saps 30 percent of Zynga’s revenues on virtual goods, is another flaw in the Zynga business model.

Another Zynga critic is Michael Pachter, an analyst with Wedbush Securities. He told VentureBeat: “I truly think that the underwriters did a poor job of placing the issue with long-term investors. The volume traded was over 100 million shares, telling me that a substantial percentage of the buyers were in there to flip the stock rather than to invest. There were likely 20 percent or more of the shares placed with these guys, who took a quick profit at the open and left even weaker traders holding the stock as it went down. The guys who bought after the market opened panicked, and the stock took a long while to stabilize.”

Among the things that will help stabilize the stock include better research, Pachter said.

“You only thought [Zynga] was worth $10 because Morgan Stanley told you so,” Pachter said. “If they priced the deal at $9 and placed all of it with mutual funds, it likely would have traded up to $9.50 or higher, and your question to me would have been different.”

This post was updated with final numbers at the end of trading on Monday.