Zynga is taking its prized FarmVille casual game brand into a new territory today with the launch of FarmVille: Tropic Escape, where you do a lot less farming and run a getaway inn on a tropical island.

The game is a new twist on the FarmVille brand, which debuted in 2009 and has been installed by more than 700 million people. FarmVille is a big reason why more than a billion people have played Zynga games. This FarmVille spin-off experience targets older women, the main players of FarmVille, and appeals to the busy person’s fantasy of getting away to a beautiful resort.

The game is available to download for free today on the App Store for iPhone and iPad and on Google Play for Android devices. The title is the first big FarmVille title since Zynga launched FarmVille: Country Escape in April 2014.

“With this game, we wanted to take our players to a new destination,” said Nicole Opas, general manager at Zynga, in an interview with GamesBeat. “We are presenting them with this idea of an escape.” 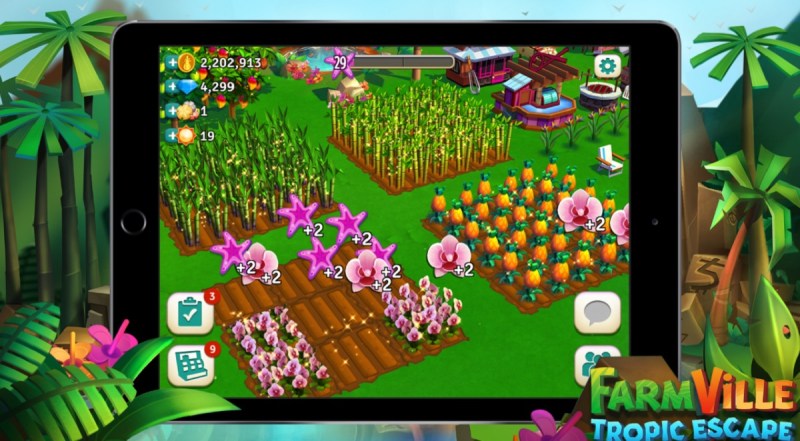 Above: FarmVille: Tropic Escape will still let you farm.

Farming is still at the core, but you’ll have a lot of other adventures. You can grow crops that you will use as food at the beachside inn. You’ll feed a variety of dishes to your guests and trade with other players to get different items.

Opas said the game is tuned for a mobile experience, allowing you to do things more easily like checking in and harvesting your crops using simple swipes of a finger.

Players will also journey around the mysterious island, completing story-based quest such as a search for some lost grandparents. You can explore uncharted areas, uncover rare items, and meet new characters and companions.

With the inn, you can engage your guests with workshops, raise exotic animals, craft items, and delight guests with tropical treats including piña coladas, sushi, and flower leis. Your goal is to hire a bunch of employees and build the place into a world-renowned resort. If you build a helicopter pad, you can attract celebrities to the star bungalow.

Trusty guides, such as Domingo, the island expert, and surfing and water sports pro, Chloe, help uncover island wonders like the coral reef, smugglers cave, and the mysterious shipwreck. The game has a modern-day look, with the “tropes of leaving city life behind and becoming a proprietor of a beachside inn,” Opas said.

For the first time, players can earn daily rewards and in-game advantages by completing mini games. They can earn coins, gems, and more to deck out their slice of paradise. In addition, players can enhance in-game connections with their friends by trading crafts to obtain advantages across the island. Friends can also create social Beach Clubs and live chat with each other in real-time. 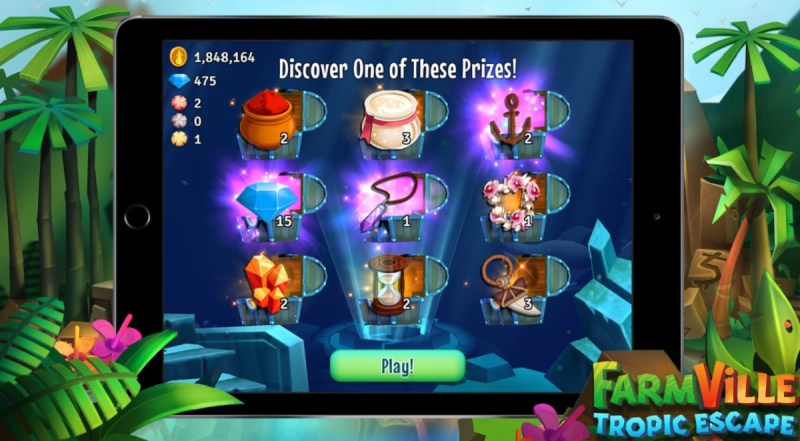 Above: Farmville: Tropic Escape has lots of rewards.

Opas said that 40 percent of the team that made the game is female, including female leaders such as director of product Heather Houston.

You can raise dolphins, sea lions, and other aquatic animals. The game will have more frequent events with shorter durations, in contrast to big tournaments in previous games, said Houston. You can enter weekly challenges where you earn resort rating points, and you can compete on leaderboards to become the top resort.

In a new mini game, you can buy items from other players on a global market.

“Farming is still the base for doing things like building up your inn,” Opas said. “We have added a purpose and reason for why you are doing the farming.”

Houston said the game was in geographic testing for a few months, and Zynga also tested the concept with thousands of people to see how well they would respond to the theme. A bunch of other island paradise games are out there, including Minion Paradise from Electronic Arts, but Zynga chose to focus on crafting and a cool Caribbean setting.

The game already has 31 levels, and Zynga has planned more than two years of additional content that it will release over time. Play times could range from five minutes to an hour.