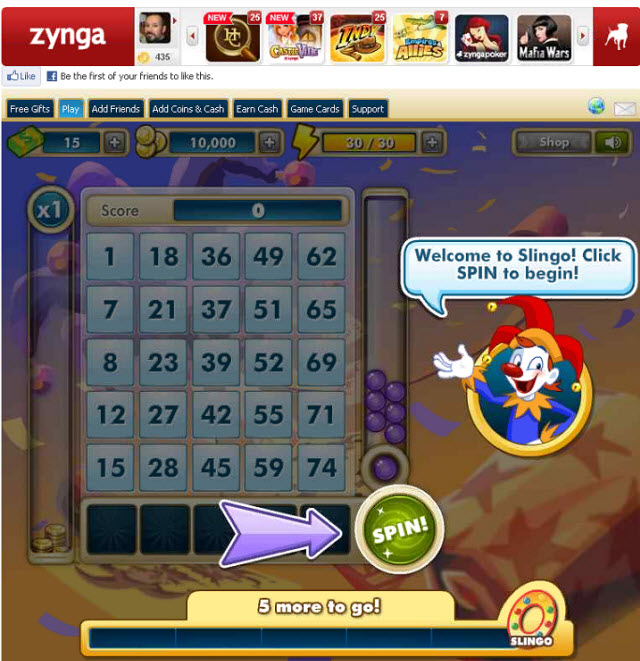 Zynga has teamed up with cross-media gaming firm Slingo Inc. to create a new version of the casual game Slingo on Facebook. Slingo is a 15-year-old amazingly popular game on the web and it is even on slot machines in casinos. But it’s never been on Facebook until now. 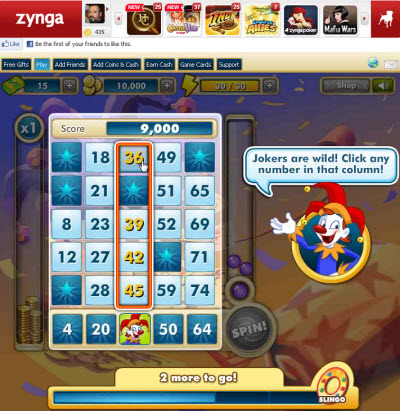 Zynga has licensed the rights to make Zynga Slingo to bring the game to Facebook and it is launching the game today. Slingo is a combination of traditional Bingo and a slot machine. As pictured above, you click on the “spin” wheel and five numbers appear like the spinning numbers on a slot machine. If you have a match, you can start clearing numbers on your Bingo card. The goal is to clear as many possible numbers on the card as you can. You win an assortment of coins if you succeed.

It seems like a perfect marriage but an incomplete one so far. Zynga Slingo isn’t yet integrated into Zynga Casino, which creates a common friend system between friends who play both Zynga Poker and Zynga Bingo. And it seems like Slingo is a perfect way for Zynga to move into the online gambling market, since Slingo is already available in various forms as an online gambling game. But neither company is talking about that yet.

Short of those two possibilities, Zynga Slingo seems like it still has a lot of opportunity. Consumers have spent more than $1 billion on it during its history. Players have downloaded more than 50 million Slingo games and played those games over 5 billion times. Slingo.com has more than 4 million registered users, 80 percent of whom are women. They spend an average of 34 minutes per visit. Those users view more than 14 million video ads per month. But Slingo is down from its peak of 15 million monthly unique players, and it has to do something to follow its users into the modern age.

Rich Sawel, product manager for Zynga Slingo, said in an interview that the company isn’t commenting about the prospect of moving into online gambling. (Zynga has already said it is considering partnerships to move into the online gambling market). 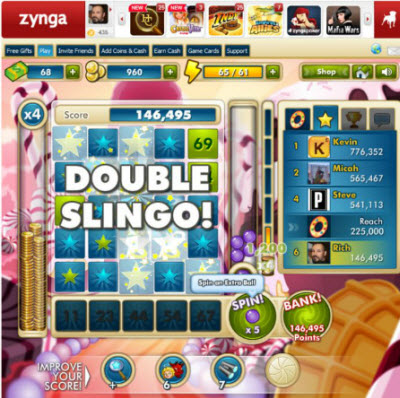 “We’re excited to bring this to Facebook with our own unique spin on it,” Sawel said. “Users who have played it in the past will feel right at home with it.”

Zynga and Slingo Inc. partnered a year ago and the game has been in the works for a while, said Slingo chief executive Rich Roberts. (Slingo was established in 1995 and is owned by Sal Falciglia.) About a year and a half ago, Roberts’ team did a reboot. They knew they needed to rebuild the brand with new partnerships. They got the slot machine version of the game in more than 400 casinos in partnership with IGT Casino. They also did deals that licensed Slingo to various state lotteries.

“But we were missing what we had with AOL in the past to get the brand out there,” Roberts said. “We are on 10 platforms, and now we’ll be on Facebook.”

Zynga Slingo requires some skill to play, particularly when you choose a strategy about how to use your extra power-ups. That may factor in how states eventually decide whether to allow games such as Zynga Slingo under online gambling laws. Games of chance face tougher hurdles, while games of skill, such as poker, face easier approvals.

As for online gambling, John Schappert, chief operating officer of Zynga, said on the company’s analyst call yesterday, “It’s a very interesting opportunity because we are uniquely positioned. We have the world’s largest online poker game and have been running it for the last four years and it posted record results last quarter.” But he didn’t say more about how Zynga might dive into that market.

“We have an audience that is very familiar with the brand and the kind of gameplay it offers,” Roberts said. “It lends itself to an environment where people chat and play for hours.”

Zynga, meanwhile, has amassed more than 246 million monthly active users on Facebook. Most of those are casual gamers who are likely to play games like Slingo. In Zynga’s version, players can play Slingo games until they run out of energy. They can get that energy from friends or purchase it. 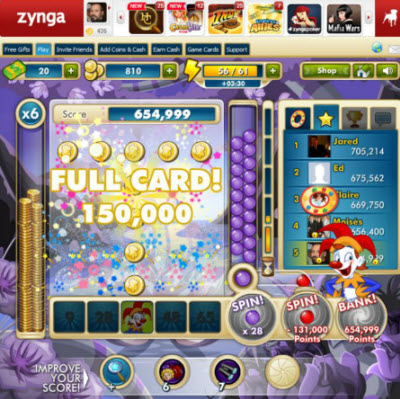 Part of the fun of Slingo is that you can have rewards cascade on top of each other as you score more points. You can wager some of your virtual currency in hopes of winning more of it. Zynga has also tried to make it fun with cute graphics and happy carnival-like sounds. The Zynga Slingo game also has a variety of characters, such as the Slingo Joker, which grants a player a free match when it shows up in the spinning reels.

On the social side, players can track the scores of friends in real-time. You can collect medals and brag about them. And you’ll eventually be able to challenge friends and compete to see who can get the highest score in three rounds.

The potential for Slingo to be used with online gambling is clear. In a survey of 25,000 Slingo users, Hackensack, N.J.-based Slingo Inc. found that 21 percent of those who discovered it online went to a land-based casino to play Slingo. Zynga Slingo will be available in 14 languages.

Sawel said that the company will consider whether to add Zynga Slingo to the suite of Zynga Casino games and integrate the friends list with Zynga Bingo and Zynga Poker friend lists.

“We will listen to the consumers,” he said.