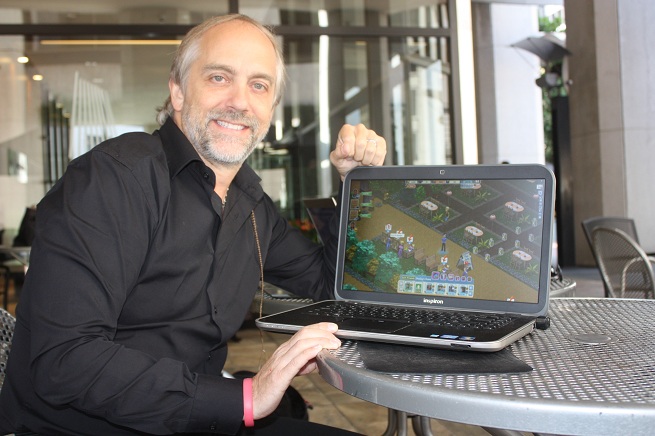 Social gaming giant Zynga is a company in transition, and this represents an opportunity for veteran game developer Richard Garriott and his social gaming startup, Portalarium. Today, the man known as “Lord British” is announcing that Zynga is publishing his Ultimate Collector game on Facebook and Zynga.com.

Zynga is the world’s largest social game firm, with more than 300 million users. It recently reported weak earnings amid a shift in game-playing patterns on the social network. It has also begun a third-party publishing operation in which it publishes games for third-party developers on platforms where Zynga’s vast audience will see them.

Garriott, who gets his Lord British moniker from his historic Ultima role-playing game series, said in an interview with GamesBeat today that his startup is focused on “mid-core” titles that are more engaging and are much more like real games than traditional casual fare. He believes a shift toward these kinds of games is taking place on Facebook and that Zynga can capitalize on the trend through third parties.

Garriott believes the future lies in free-to-play games, where you can play for free and pay real money for virtual goods. The games should also be browser-based and easy to access, with no complex installation. And they should accommodate both synchronous multiplayer play as well as asynchronous (one turn at a time) play. Garriott believed he had to start a new company to come up with this kind of game. And after testing the waters with a poker game, Portalarium’s first major effort is Ultimate Collector, which Zynga should publish in six to eight weeks.

“We believe the market is already showing its taste for more depth and stickiness,” he said. “And that’s what we create. The front-end for these mid-core games is light enough to attract new gamers, but we add enough depth so we don’t run off the hardcore players.” 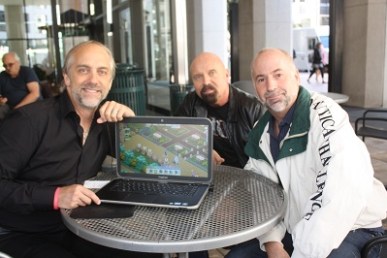 Ultimate Collector is a mirror of Garriott’s obsessions. Besides being a game designer and one-time astronaut, he has also been a master collector in real life, picking up meteorites, automatons, magic, fossils, and all sorts of other things at his museum-like home in Austin, Texas.

“I know the joys of collecting in the real world, and it is an enriching experience,” he said.

His obsession seems to be shared by everyone. Cable TV shows such as American Pickers, Pawn Stars, and Storage Wars are fueling the appetite for collecting, which is a multibillion-dollar industry in the real world.

Ultimate Collector is like three games in one: a collecting game, a shopping game, and a home-building or world-building game. You start with your character and a simple home, bearing some resemblance to The Sims. But the focus is to unpack boxes, find collectible items, sell them, and then earn enough money to decorate your home and expand your collections.

You rummage through boxes at garage sales. When you find an item, you can appraise its value. You can also make a bid to purchase it. The seller (in this case, an artificial intelligence) will bargain with you until you arrive at a price. If the object is damaged, you can offer a lower price. Then, after you acquire it, you can repair it by earning materials through the gameplay experience. Then you can fix it and sell it on the market again for a higher price. If you make enough profits from buying and selling, you can generate more income to expand your operations and home. 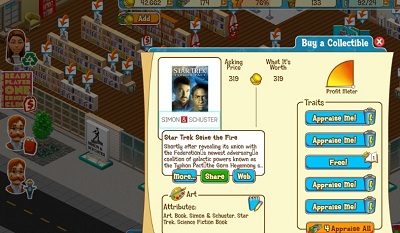 One of the cool things about the game is that it has connections to the real world. You can look up a miniature toy car’s real details by clicking on a link. That link might bring up an eBay auction for the car. You can purchase the real thing if you want. If you do so, Portalarium stands to make money through affiliate partnership deals.

“If I’m a fan of Corgi brand toy cars, I click on a web link where I can find out about it and then buy it,” Garriott said. “To use the brand names in the game, we had to start doing affiliate deals. We want to scale this up over time.”

Affiliate partners include Macy’s, Simon and Schuster, Wild About Music, Go Antiques, and Wonderful World of Animation. He’ll announce more brand affiliates later. Portalarium also has a tie-in deal with the best-selling book Ready Player One by Ernie Cline. The book about the early computer game industry has a contest where you can win a Delorean sports car. One of the clues for that contest is in Ultimate Collector.

Ultimate Collector has been in the works for two years and is in closed beta testing. Portalarium has also built more traditional monetization into the Facebook game. You can purchase coins that speed up a process (like receive offers for your collectibles at a faster rate) or expand your inventory of goods you can carry home from a garage sale or flea market.

Garriott said that in the future, Portalarium will make mobile versions of its games first, in recognition of the fast-growing smartphone and tablet game market. A mobile version of Ultimate Collector should follow about 60 days after the Facebook version launches. If all goes well with Ultimate Collector, Garriott says the team — which is now 37 people — will turn its attention to making “Lord British’s ultimate role-playing game.”

“I am a huge believer in the power of mobile,” Garriott said. “There were periods of my life when I was an avid gamer. I am by far a bigger consumer of gaming content than ever before. I play more hour and buy more games, but the vast majority I play on my iPad and iPhone.”

Garriott said he believes in the PC and in Microsoft, but he is waiting for now to see how Windows 8 does before he supports it.

As for why Portalarium has to turn to a publisher like Zynga in the first place, Garriott recognized that each era of publishing has its challenges. Right now, Facebook has turned off a lot of the viral mechanics that gave Zynga its huge audience. It did so to reduce spam for nongaming users. That means game startups have to take out a lot of ads to get noticed now. By contrast, Zynga spends relatively smaller amounts on ads per new user because it can cross-promote new games to its existing users.

“They have millions of eyeballs and are clearly the master of viral spreading and monetization,” Garriott said. “We’d have to spend money on marketing to acquire users, either way. And there is less risk this way. The early analysis shows Zynga is a good platform.”