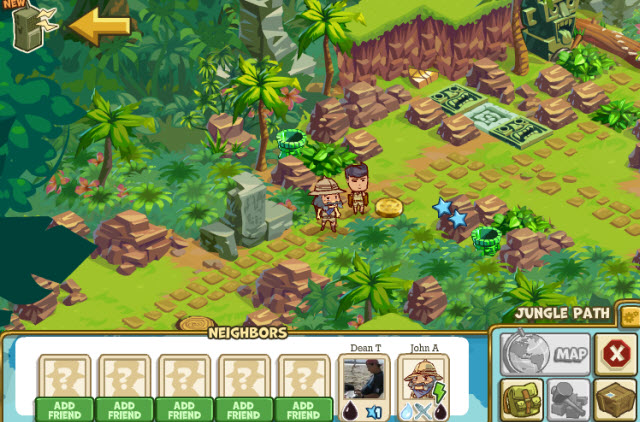 Zynga just launched its Adventure World social game on Facebook, speeding the pace of its game introductions as it prepares for an initial public offering.

Zynga is methodically using its newly hired and acquired game teams to create Facebook games that appeal to its 275 million monthly active users on Facebook by adding new games in untapped genres. If it can succeed in these new genres, it should be able to produce enough revenue growth to successfully go public. But it must do so at a time when the stock market is jittery. Zynga filed to go public in June, but it still hasn’t done so, most likely because of continued market volatility.

The game is one of the company’s most ambitious yet, containing 200 quests, 30 maps, more than 1,000 art assets and 20,000 objects. It was made by the Zynga Boston studio, which was formed after the acquisition of Conduit Labs. We’ve played through the beginning level of the Indiana Jones-style game. It’s got dramatic music, cute sounds, a good-looking and large map, and lots of fauna to hack. The game’s slogan is “Grab life by the boulders,” and its cartoonish art is meant to appeal to as broad a group of users as possible.

Adventure World is one of the byproducts of Zynga’s acquisition strategy, which has yielded a new acquisition deal every month for more than a year. The seeds of the game started at Zynga Boston, which Zynga acquired when it bought Conduit Labs a year ago. After the acquisition, Zynga shuttered Conduit’s social music game and bankrolled Adventure World, which was just a concept at the time, said Nabeel Hyatt, general manager of Zynga Boston and former CEO of Conduit Labs, in a recent interview. Hyatt refers to the new genre as “social adventure.”

Adventure World is set in the “golden age of exploration,” and it draws inspiration from all sorts of adventure fiction, Hyatt said, from Indiana Jones to Lara Croft to Zelda. But the game is rendered in Zynga’s distinctive cartoon style and is aimed at appealing to the large female demographic on Facebook in addition to hardcore gamers. Players search for the lost city of gold, El Dorado, solving puzzles and finding hidden objects in the terrain. Zynga says the feature-rich game is the largest it has ever offered in a first release.

The game starts as players fly to a base camp in Central America, joining an Adventure Society in the quest for El Dorado. The game has five worlds: Deep Jungle, Mountain, Cavern, Volcano and El Dorado, with more than 30 dynamic environments that include clouds, hostile rams and snakes. You can walk into traps that sap your character of energy, and much of the maps remain undiscovered, covered in fog, until you traverse them.

The game is more than 40 times bigger than past Zynga games like FarmVille. You can create a crew of up to 12 Facebook friends who can join your party and help you get through the different obstacles. There are five kinds of snakes, four kinds of spiders and two kinds of rams, all of which present unique obstacles. Players can customize their avatars, or virtual characters, with a total of 10,000 different variations.