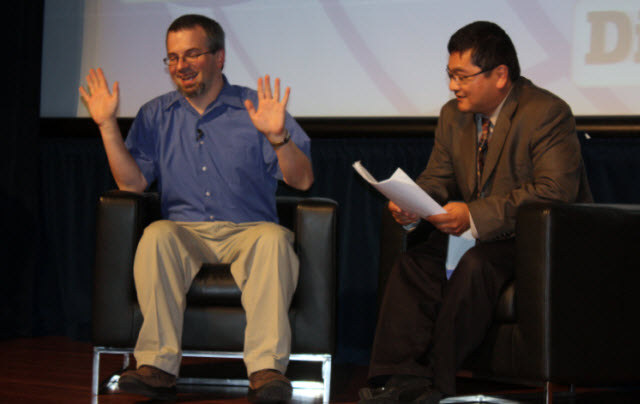 Brian Reynolds has a booming laugh, but it won’t be heard in the halls of Zynga anymore. The company’s chief game designer has resigned, according to games news site Polygon.

Zynga has confirmed the departure, which is a blow to Zynga since the company has suffered a brain drain in the past year as high-level executives move on to greener pastures. It started in August after the company was hit by weak second-quarter results and chief operating officer John Schappert resigned.

Reynolds (pictured above at our 2010 DiscoveryBeat conference) joined Zynga in 2009 and brought instant credibility to the company. He was previously creative director and chief executive at Big Huge Games and made hits such as Rise of Nations and Alpha Centauri (while working as a designer at Firaxis Games). But he had an open mind about casual titles, such as Zynga’s FarmVille, and joined Zynga to learn about how to bring gaming to a larger mass market.

“Brian has a long history in the game industry and has been a great partner to the creative leaders at Zynga,” Steve Chiang, president of games at Zynga, said in a prepared statement. “I want to thank him for his leadership of the Zynga Baltimore studio in the design and development of FrontierVille, which brought many innovations to social gaming. We appreciate Brian’s contribution, and we’re proud of the deep bench of creative leaders who are leading the next wave of game innovation at Zynga. We wish Brian the best in his next chapter.”

Reynolds headed the Zynga East studio in Baltimore and created titles such as FrontierVille and CityVille 2 at Zynga.

Zynga reports its earnings on Feb. 6. Michael Pachter, analyst at Wedbush Securities, believes the company will beat consensus earnings with revenue of $275 million (compared to $212 million for consensus) in the fourth quarter ending Dec. 31. He expects earnings per share of a loss of 3 cents. Pachter said in a research note (issued before today’s departure news) that said that the promotions of current executives are reinforcing the management team. Zynga recently appointed Mark Vranesh as chief financial officer. It moved David Ko, Barry Cottle, and Chiang into bigger roles.  Those changes, he said, should restore investor confidence.

But maybe Reynolds will ruin that party.