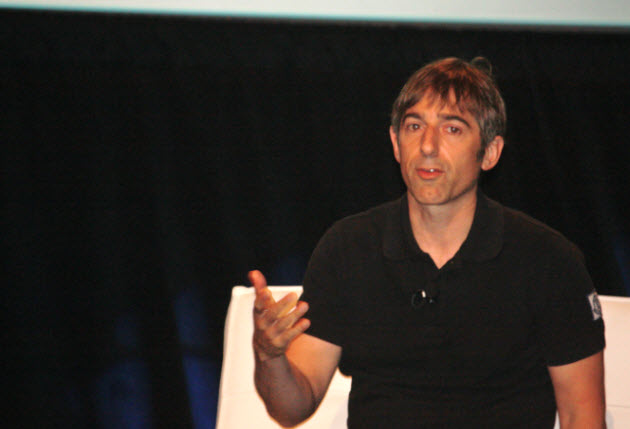 Social game publisher Zynga has become the fastest-growing startup in the valley in part because it is run by “data junkies” who measure every click in every game. At the same time, Zynga is paying more attention to the long-term efforts of its veteran game designers, who have developed an intuition about what games will be popular.

That’s one of the comments made today by Mark Pincus (pictured at top), chief executive of Zynga, and Bing Gordon,  a partner at Kleiner Perkins Caufield & Byers and a board member at Zynga, at the Techcrunch Disrupt conference in San Francisco. The on-stage interview between Pincus, Gordon and Kleiner Perkins partner John Doerr covered how the company’s key leaders view Zynga’s rapid growth and where social games are headed. 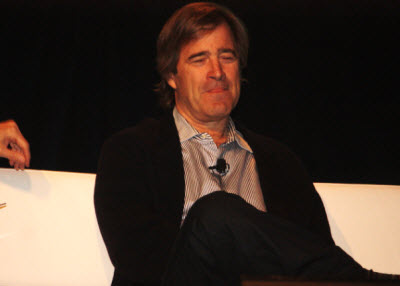 Zynga’s social games have more than 215 million monthly active users on Facebook, Pincus said. In four years, the company has grown to more than 1,200 employees and it adds more than a petabyte of data per day as it measures the activities of its users. The company’s games were played by 33 million players just yesterday. Doerr said Zynga is the fastest growing, the most profitable, and the company with the happiest customers of any Kleiner Perkins company in history. He added that Zynga could be considered a true “internet treasure.”

Pincus credited Zynga’s success in part to the company’s two-fold DNA. It is full of web veterans such as him (Pincus is on his fourth web company), and game veterans such as Gordon, whose personal goal at Zynga is to “level up” the company’s game design. That’s why Zynga now has 13 game studios in eight locations with more than 600 game engineers. Zynga has been criticized for copying the games of its rivals. But Pincus said the company’s “journey” has been to learn to respect both the disciplines of game design and of the fast-moving web.

Pincus said his goal is to create something people can’t live without. As popular as the company’s games are, they aren’t yet indispensable to people, nor have they hit a true mass market yet. Gordon said that, while at Electronic Arts, he used to think that mass market video games had audiences of 10 – 20 million users. But as cell phones reach far past 1 billion users, he has come to think of the mass market in new ways.

Pincus said we are headed for an “app economy,” where getting an app to start is as easy as picking up a telephone to make a call. By sticking to a long-term vision of reaching as many users as it can, Zynga can make its own decisions such as how dependent it should be on platforms such as Facebook. Zynga has begun to diversify, but it has stuck with social network platforms because they help it get its games to the largest numbers of users.

Pincus targeted those mass market consumers with his original vision for Zynga. What if, he said, Zynga could lower the barriers to entry for playing a game, allowing users to start playing an online game in just three clicks of the mouse.

Now, Zynga measures every click of every user playing games every day by the tens of millions. Pincus said that Zynga measures its customer satisfaction every day. By doing that, it allows its team members to do the right thing for customers more easily. It thus enables Zynga to better live up to its goal of allowing every employee to “be a CEO” in their own area of responsibility.

Gordon said he learns a lot from Zynga every day. He was attracted to the company as an investor because it combined four disruptive themes: online gaming, social media, the app economy, and new payment methods such as virtual goods.

Pincus has been thrown out of one of his own companies before. In starting Zynga, one of his goals was to keep control of it. He managed to stay in control, yet he invited big investors such as Kleiner Perkins to join. With Gordon offering so much advice, Pincus said he has never taken and acted on so much advice from his investors before. He considers it ironic that he kept control but ended up taking so much advice. Pincus said that entrepreneurs should focus on investors who can bring not only the highest pre-money valuation but a shared vision for the long term.

Gordon said that Zynga was like Electronic Arts in the early days. “It’s like a return to my youth, but three times faster, more fun, and smarter people.”