Kohler: Draw Something had this arc where it kind of exploded and then went down after that….

Ko: That doesn’t show the full picture. You referenced that by what you see in Facebook Connect, looking at those data points. The reality is, though, that there’s a huge subset of our users that don’t connect through Facebook. I would say that takes a portion into account. You can also log in through email and use things like your Twitter handle. So there are other ways you can log into the game that aren’t quite being captured. I think that while looking at things like that, Facebook Connect and usages, they’re a great way of seeing a certain perspective, but I think it only tells a piece of the overall story.

Kohler: How do you look at gaming virality in a game’s design? It’s got to go so far beyond, these days, just asking somebody, hey, tweet about this, hey, Facebook message about this high score you just got. At this point, it’s a lot of spam, right? You don’t want the tail wagging the dog. You don’t just want to create this. How do you continue to have people interact with the game when you think about your game design?

Ko: That’s a good question. You’re asking about social. We challenge every game designer, before it comes into what we call our IP process, to tell us why this game is more social or more fun or better quality than any other game in the marketplace. I think there’s a lot of great developers in the marketplace today, but we try to really differentiate ourselves through the social components and the social aspects of the game.

Let me give you an example. One of the games that we just launched was called Zynga Slots. There’s a lot of slots games in the marketplace today. So when the team came and said, hey, we want to build a slots game, there were natural reservations about, well, what’s going to differentiate this game versus every other game in the marketplace. And we made them go back to the drawing board a number of times. What ultimately they came back to us with was a really innovative game that you can go and download today, that centered around social jackpots, that centered around a social lobby, that really brought in your friends. The more friends that you play with, similar to Vegas, your potential winnings get hotter. It integrated things from other characters in other games to the games themselves that unlocked different levels.

When we looked at that game and noticed it was more social in nature than other slots games in the marketplace, and that was a big fun aspect that we saw, that it brought in other characters from FarmVille, for example, and that it was a high-quality game in terms of load time performance. So we start there. There’s so many games, I will tell you, that we shelve today, because there’s so many folks, even in this audience, that can build a better game and we can’t make it more social than what’s out there today. So we’ll scrap it. But when we feel we can differentiate ourselves through a more social experience, that’s where we see our opportunities.

Kohler: Do you think there’s a long-term future for mobile games that don’t have social elements?

Ko: Yeah, we do, but that’s not in our wheelhouse. I think there are lots of developers out there that can build single-player games, and that’s great. That’s why we also did our publishing program. We offered five games in our publishing program initially, whether it was by Atari or Phosphor, and I’m really excited to see some of those games come out. They’re very different from the games that we offer today. The fact of the matter is that we want to make different genres of games available for our players. We recognize that our players want to play a bunch of different games, they want to play games that are like Words With Friends and Draw Something, but they might also want to play heavy 3D kinds of games or physics-based games that we don’t offer today. We want to be able to offer those to them. That’s why we did our publishing partnerships.

Kohler: So is that the idea behind this crossover era? The concept here is, okay, we’ll have the established players in traditional games adapt to the new world of mobile devices or browser games. That’s Zynga’s crossover opportunity, then? You occupy this one space, but clearly there’s more that you could be doing. 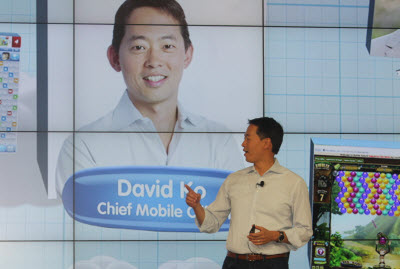 Kohler: There must be a lot of people who work at Zynga, working on mobile games all day, and they go home and sit in front of an Xbox 360 and play console games….

Ko: Absolutely. They play in the office. We’ve got consoles. You’ll see it, hopefully most of you will come to our event tonight at headquarters. There’s tons of console gamers all over the place. We encourage gameplay. We just want to unlock that creativity.

Kohler: What do you think about… The big news story that’s going around today while we’re all here is the startup company Ouya, with the Android-based 99-dollar App Store-style console. What do you think about stuff like that? Taking the mobile market that’s already working in order to shake up the way we play games and transporting that to the living room. Do you think that can change the living room, is it something fundamentally different from your phone?

Ko: I think there’s a huge opportunity there. You see many companies going after this already. Even Apple and others have looked at the market and asked, how can we integrate the console or the TV? I do think what you’ll find is there’s a big opportunity for all of us in tablets today as well. There’s a big push by many companies into the tablet area that’s kind of a nice transition from the PC, as you think about going to your phone. I do think that some of the announcements that we’re seeing, whether it’s about cloud computing or around taking stuff to Android and making it more of a console setup, I think those are all interesting. They’re going to take a little bit more time, I believe, to evolve than some of the things that are right in front of us, but I think that’s great, because it gives you more opportunities to play and use these apps that are on our devices today.

Kohler: What are you looking for from third parties or independent developers who are going to say, hey, maybe Zynga can publish my game? What are you hoping to hear from them about their products?

Ko: I want a lot of them to be excited about being on the Zynga Network. I’ve been there for 19 months now, just trying to build this highly curated mobile gaming social network. When I first came in I wanted to make sure we were able to leverage these amazing things that we had out on the web. We have so many people playing games out on the web, and everyone has a mobile device. We wanted to see how we could bring some of them to mobile, because they were telling us they wanted to play games on mobile. And now what we’re saying is, how do we grow this ecosystem together? The message that we’ve gone out with is pretty simple. We’ve got this base today, we’re open for business, we’d love for you to be a part of it. There are other networks out there today that are trying to do some of the same things, and I think that’s great for developers, because I think having competition or other folks that are trying to make the ecosystem easier for developers will challenge each of us to really think about it from your perspective. And that’s what I find exciting, because that’s going to push each of us to make it more developer-centric. It will make it so that we’re really focused on building a great game or building a great experience, and then all the other stuff, hopefully, we can help that just surface in the background.

Kohler: Is the $60 video game dead? Is there a place for that?