The horizon can be sometimes be dark, but the dawn may not be worth the wait.

Dawn of Titan is the most recent free-to-play game from Zynga, and it’s the company’s attempt to create a game that appeals to both the casual-leaning mobile user base and PC strategy-game fans. Titans, which suffered a delay earlier this year, follow’s Zynga’s past social gaming hits like FarmVille and Words with Friends,

But Dawn of Titans suffers from the current systemic approaches in mobile gaming, and while it was quite enjoyable at first, it falls prey to its monetization system. I’ve never played any of Zynga’s past games — I’ve avoided the bombardment of FarmVille requests over the years — so I’m not coming at Dawn of Titans as a fan of the publisher’s past work but more as a fan of strategy games that Dawn of Titans tries to emulate. I’ve been playing it daily for over a week now — having gotten nearly to level 8 — but am finding diminishing returns and a game burdened by an ecosystem that makes playing it more about waiting (or paying to not wait) than actually enjoying what it has to offer.

The technology behind Dawn of Titans — developer NaturalMotion’s Echo and Morpheme engines — are also in Grand Theft Auto 5 and The Lord of the Rings films, and with that, parts of the game look great, like the zoomed out view of your customizable castle area.

This is where you’ll build farms, gold mines, barracks, and other buildings to raise resources and create units for your army. The balancing of the farming/castle building mode (which I enjoyed managing) and the additional battle-based modes are smart, and fighting while waiting for resources to generate — at least when the timers are low — also adds something for players to do instead of just having to wait around. 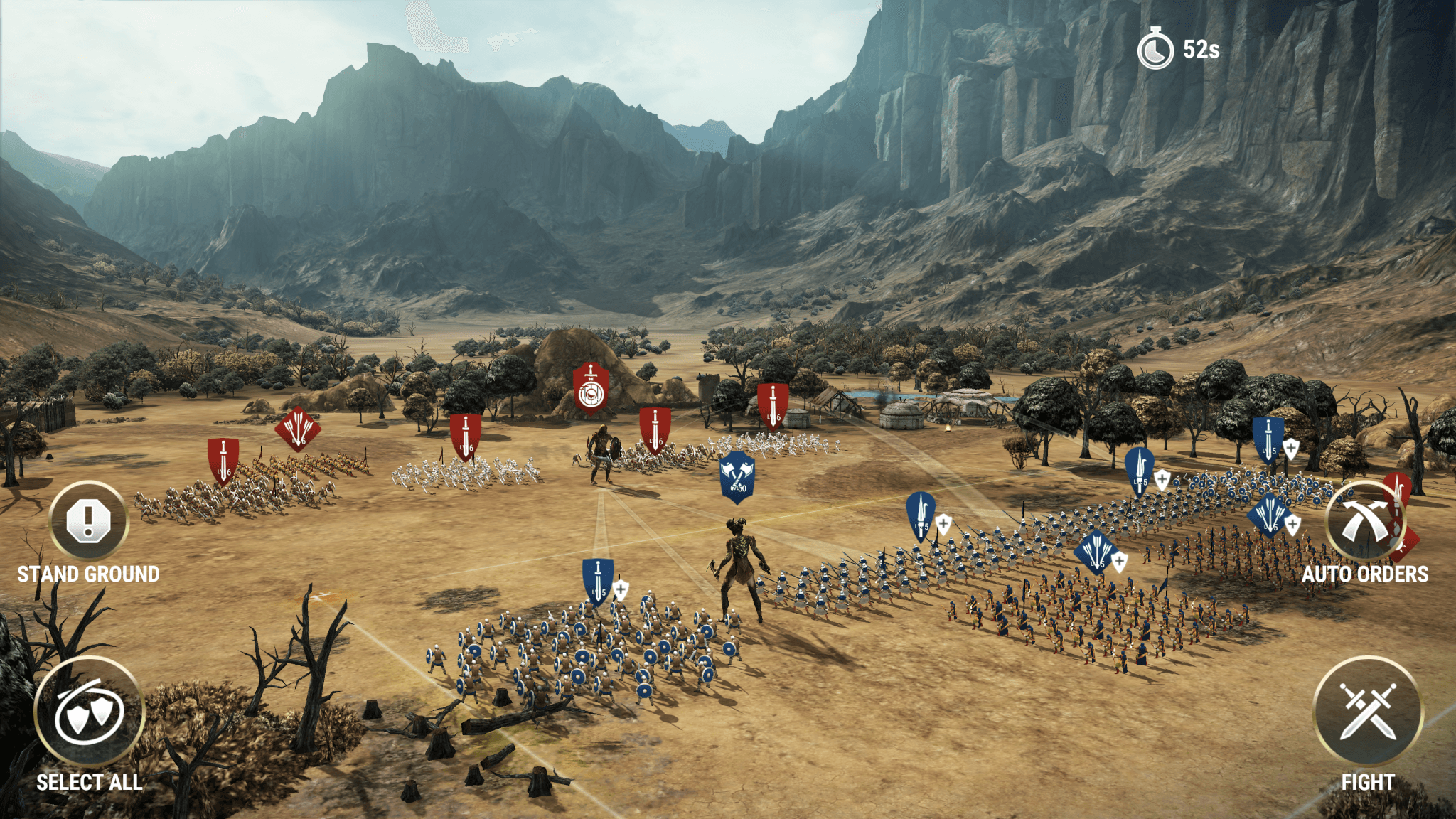 Above: Players can give units individual orders ahead of the start of each battle.

And Titans’ battles are its strong point. Players control both a titular Titan (which are quite overpowered) and an army of units, such as archers, militia, spearmen, and four other unlockable classes I haven’t made it to yet: panthers, grenadiers, pikemen, and goliaths. Seeing your titan crush opposing forces and destroy units is the most fun I had in Dawn of Titans.

Along with multiplayer alliance-based battles, Titans also boasts a sizable single-player campaign, which I enjoyed at first. But even the best parts of a game can wear you out. The campaign started to feel too long, progress becomes too slow, and the battles lost their fun.

But that’s far from all that isn’t working in Titans.

Zynga and the NaturalMotion studio have structured a game built around waiting — or paying to not wait. Early progress is quick, but the amount of time it takes to build or upgrade units and structures, and the large amounts of resources you need to do so, grows considerably the deeper into the game you get. It’s the overture to an orchestra that I probably would have enjoyed listening to, only then for the music to roll out piecemeal and with interruptions.

Dawn of the Titans has a catchy gameplay loop here, and under different conditions I could see myself getting sucked it, but it isn’t long before giant gaps of waiting for things to build or resources to generate interrupt your playing, dousing the early momentum.

At times it almost feels like Dawn of Titans was diabolically built to at first encourage progression, only to then pull back and check the player at every step. With a system that treats players like a piggybank, it presents a choice: Either wait or spend money. I chose the former: it reflects how I play free-to-play games (I’ve still never put a cent into Pokémon Go) — and how most other players would approach it as well, I imagine. 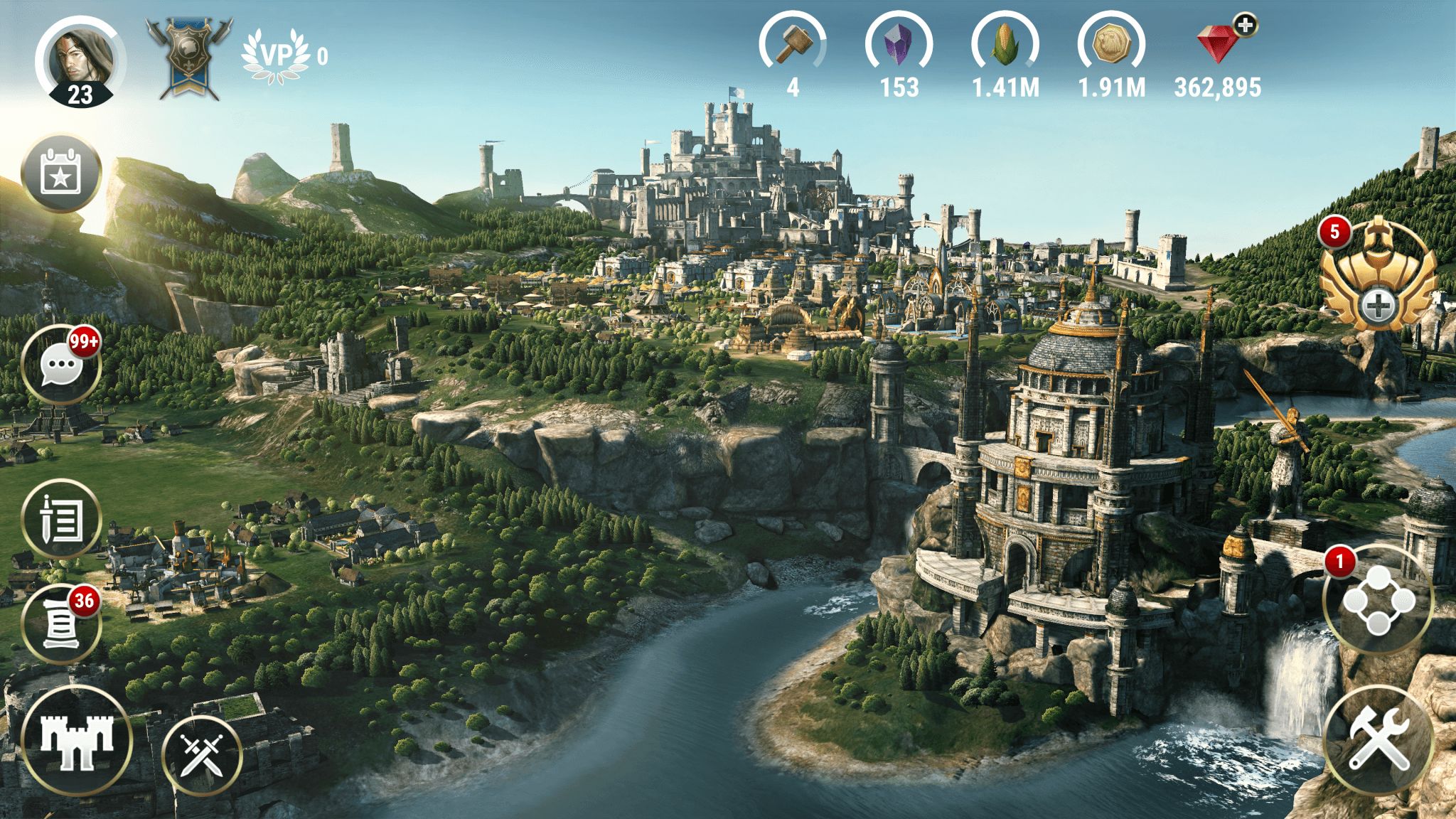 Above: The more you play, the further you can develop your castle and surrounding areas.

The pricing ($5 for 2,000 gems, the in-game currency that you can use to speed up timers or purchase additional resources, with different pricing for bundles) isn’t bad … what stinks is how Dawn of Titans makes paying necessary. I reached a point where there wasn’t much I could do but wait for one thing or another (or do multiplayer raids — there’s no direct real-time player-versus player battles), and it’s hard to stay connected and intrigued in a game that is full of so much dead time. It just isn’t fun in the long run, and my progress kept slowing down.

I’m not against waiting — the idea of a game that you play just a little bit each day (Animal Crossing is my jam) — but Titans is structured so that you hit one time gate after another, to the point where progress grinds to a halt … unless you pay. The extremes of waiting squash desire to keep coming back — why keep returning to a game that’s going out of its way to slow me down? — and play sessions devolved into ones where I’d open it for a minute before going back to having to wait to play again. It’s a problem that continues to snowball the longer you play as resource costs and timers continue to increase.

Dawn of Titans just and moves too slow and wears out its welcome.

In battle, your tap your phone or tablet’s touchscreen to control and give orders to troops. It was a system that has problems: I had trouble trying to move units and the camera at the same time, and it has no way to unselect troops beside picking other units, which was a pain in the heat of battle. You can’t pause battles, either.

While Zynga and NaturalMotion are touting the tech under Dawn of Titans’ hood, the tiny details get lost.

The individual units on the battlefield aren’t that attractive, looking jittery and flickery, like little ants scurrying around. The battle camera is also has limits — I wish I could zoom both out and in further — but I’m guessing the closer limitation was in part to hide the units’ low resolutions. 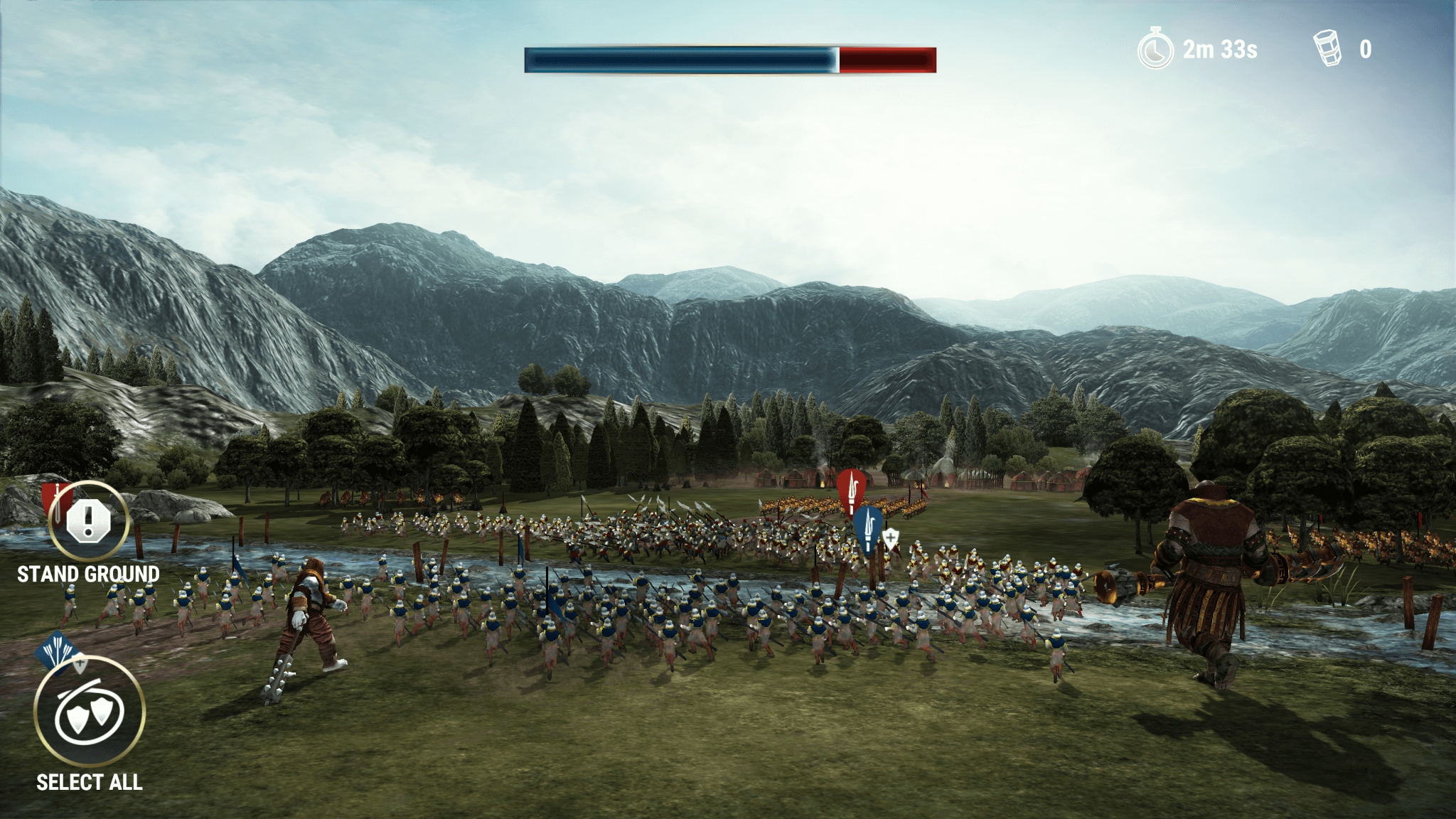 Above: Zoom in close, however, and the shoddy details of the units really come into view.

Other areas also need more dev attention: It crashed once, suffers from slowdown and stuttering, campaign text has numerous errors, background environments such as the trees have flickering issues, it froze when text messages poped in, and the Titans don’t always listen to commands. The battery drain — even in the background — also seems pretty extreme, but my iPhone 6’s battery is also on its way out, so devices with properly functioning batteries may fare better.

While Dawn of Titans may be an attempt to appeal to both casual, mobile users and more hardcore gamers, the movie and console-gaming tech can’t save a game whose monetization just keeps getting in the way.

From what I played, while there’s hints of gameplay that Farmville addicts may like, I think Titans is going to be divisive between fans of Zynga’s other more casual works and the strategy fans, and I’m not sure if either will be happy with the combined result. Farmville players may find the building section has enough appeal, while strategy fans may get bogged down with the microtransaction-based time gating and resource limitations.

Dawn of Titans has some strong and fun moments, and people that are willing to dump money into it may have different experiences, but it’s a busy time of year — especially for gaming — and there’s plenty of other games out there that better respect a player’s time.

Dawn of Titans is now available on the iOS App Store (iPhone/iPad) and Google Play. The publisher provided GamesBeat with a copy of the game for the purposes of this review.