Zynga’s NaturalMotion game studio has made an impressive technological leap with its Dawn of Titans game that I saw in a preview. NaturalMotion’s developers went to a lot of trouble creating a battle full of thousands of computer-animated medieval soldiers — only to have them swept aside like so much cannon fodder by a handful of giants known as titans.

Dawn of Titans is an amazing accomplishment because it can stage battle scenes with huge numbers of soldiers on an iPad. The title is the latest to show that mobile devices have become powerful enough to do the job that high-end gaming computers performed just a few years ago. And in doing so, NaturalMotion could very well make high-end, hardcore gameplay accessible to the masses.

For NaturalMotion’s corporate parent, Zynga, the game is a departure from the cute characters and happy cartoon landscapes of games like FarmVille. It reflects the strategy of Don Mattrick, chief executive of Zynga for more than a year now, to broaden beyond the company’s casual roots. 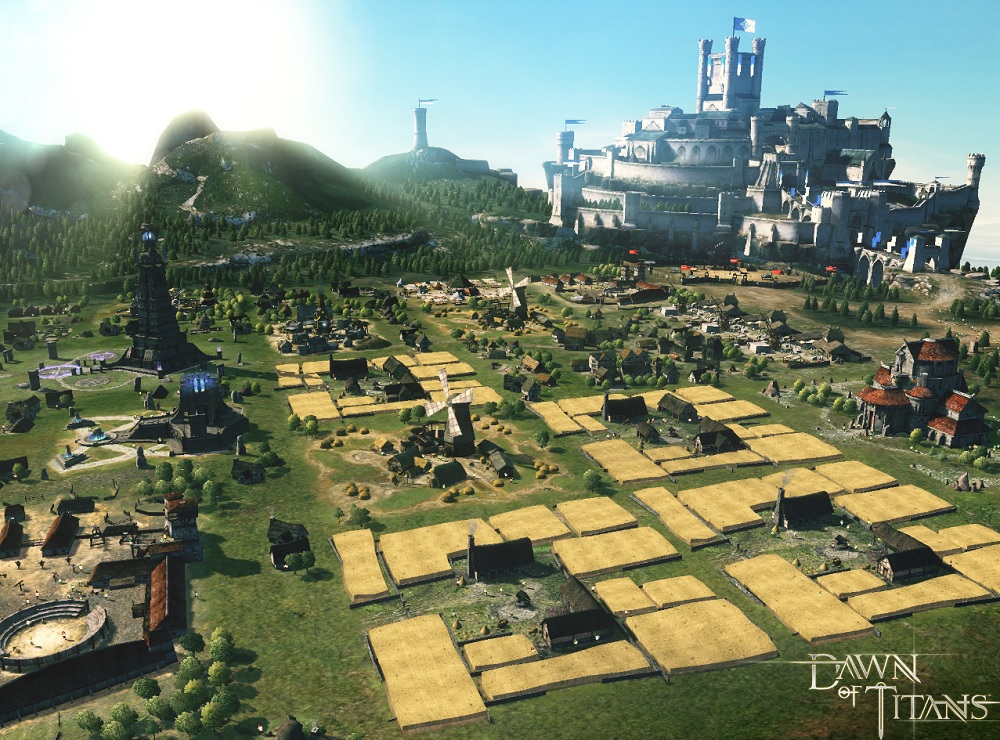 With Dawn of Titans, you reign over a beautiful kingdom with a castle, thousands of trees in a forest, clouds overhead, and waterfalls. The 3D animation is very high quality for a mobile game, and it is one more example of NaturalMotion pushing the edge of what’s possible, said Torsten Reil, chief executive of NaturalMotion, which Zynga bought last year for $527 million.

Now we’re going to see if Zynga got its money’s worth. If there’s any justice in the world, this game should kill off Clash of Clans, the clan warfare game that has held the No. 1 position in top-grossing games on the app stores for a couple of years. Dawn of Titans looks so much better, and it has much more interactive gameplay. But a lot depends on execution. Zynga is testing the title now in limited geographies, and the company may not ship it for some time.

“We really want to do things that ‘wow’ people,” Reil said. “We would like to redefine the action strategy genre. In this case, we were inspired by fantasy movies with huge battles.”

NaturalMotion has a good track record making technological tour-de-force mobile games like Clumsy Ninja, CSR Racing, and Backbreaker. The racing game CSR Racing has been downloaded 120 million times, or by roughly 2 percent of the world population. Clumsy Ninja, which featured a smart digital character, was downloaded more than 10 million times in its first week. 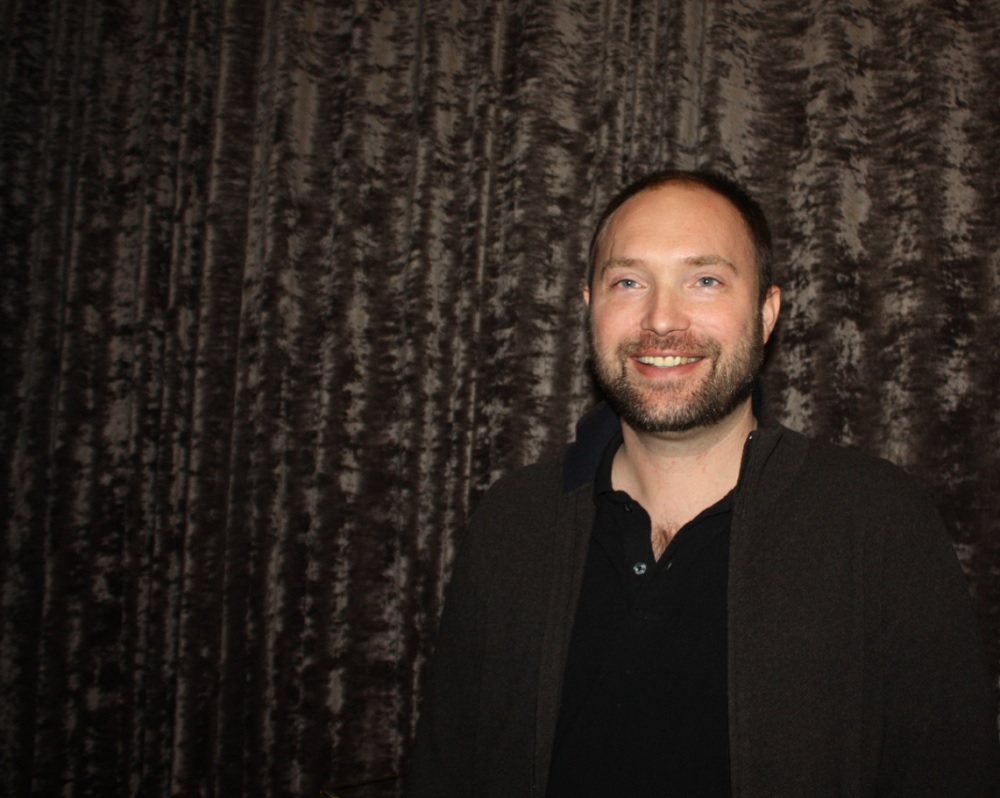 Above: Torsten Reil of NaturalMotion

The action strategy game is very ambitious, and it reminds me of Creative Assembly’s Total War series of strategy games, where thousands of soldiers fight on a battlefield in real-time combat. NaturalMotion wants to recreate epic battles, but on accessible mobile devices with touchscreens rather than PCs with a mouse and keyboard.

NaturalMotion’s 3D animations aren’t quite as good as those in Total War, which runs on high-end computers. There are a few flickering trees in the forest, and the movements of some of the soldiers are repetitive, if you inspect them closely enough. But if you’re willing to dismiss a few flaws in the graphics, you can really get lost in this kind of animation.

NaturalMotion has developed a new proprietary game engine, Echo, that enables the game to display thousands of moving units at once. The titans and troops are brought to life with NaturalMotion’s Morpheme animation engine. That gives them unique, lifelike movements, Reil said. In the battle I viewed, there were 7,000 soldiers on the screen at once.

“We tried to create the feeling that you have control over thousands of characters at the same time,” Reil said. “On top of that, you can take direct control over a titan” to cause havoc on the battlefield. “We want to set the fighting in a beautiful world, a world you fall in love with and one with a big back story.”

Reil showed me a hands-off demo at Zynga’s headquarters this week during the Game Developers Conference in San Francisco. He started with the beautiful 3D image of a kingdom, which had a castle, forests, rivers, mountains, and buildings. That kingdom serves as your base, and you can build it up by dedicating resources to it. You can create your armies and special units known as titans, which range from giants wielding big maces to hydra dragons spewing poison. 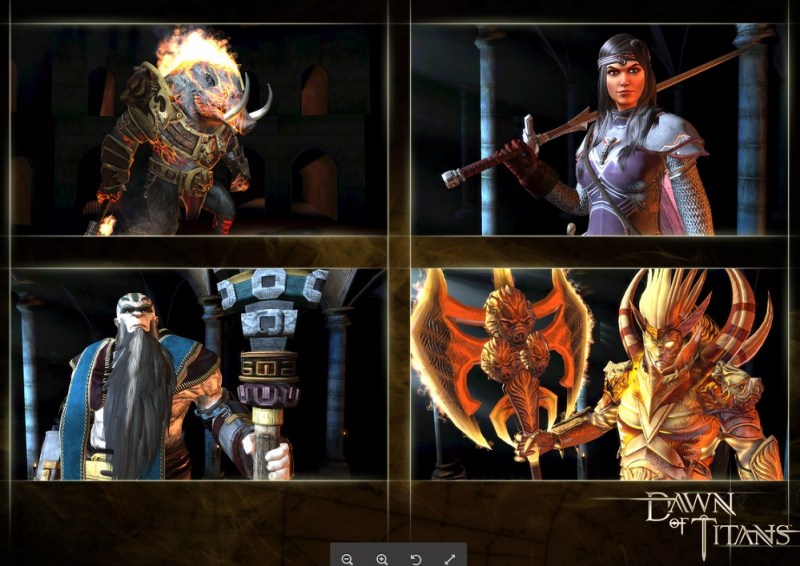 Then you can attack the enemy’s army. When you do so, you meet on a 3D battlefield. You send your platoons at the enemy by using a finger to swipe from your unit to the target. Before the battle starts, you issue commands to each unit. When you survey the battlefield, it’s impressive. The scale of the armies and the quality of the visuals are impressive. The battle unfolded at a fast frame rate.

Reil launched an attack with swordsmen, pikemen, cavalry, and archers. The images of the soldiers were part realistic, part cartoonish. Each unit has its strengths or weaknesses. When the battle starts, the armies charge at each other. But you can summon your titan to take on the soldiers. When your titan wades into battle, he can swing a mace around that tears through the enemy ranks as if they were toy stories.

If things get worse, you can summon more titans. Reil summoned a dragon that because stomping and sweeping enemies around using the whip of its tail. The dragon also spewed green poison on the battlefield, killing friends and foes alike. You manage the battle by issuing commands until you either win or lose.

The imagery was impressive, but, as I mentioned, there are just a few flaws in the graphics. Some of the soldiers behave the same way, as if they were units. Reil said the team wanted you to be able to quickly tell what kind of units you were fighting, even if they were in the middle of a fray.

When you pull out of the battle to view the kingdom, you can see clouds, view particle effects, and listen to cool sound effects. You can zoom in and get your peasants to collect resources. You can view your titan characters up close in the Hall of Titans.

You can pull out even further to see where your kingdom fits in a larger fantasy world. You can then see that it is just an island in a vast landscape. If your island has been attacked, it may be on fire and reek smoke. You can see other islands clustered together as clans. And you can see larger regions that are set aside for single-player campaigns.

“You can be clustered as an alliance or be off on your own,” Reil said. “It’s not about who makes the biggest investment in troops, but who thinks on the battlefield.”