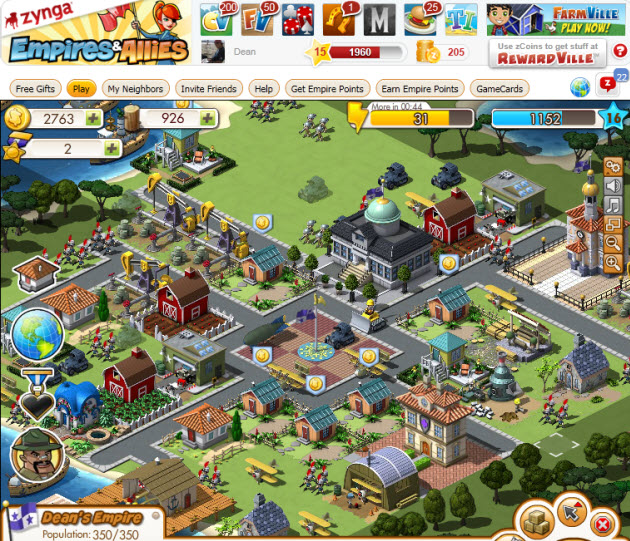 Zynga’s Empires & Allies social game has grown to more than 39 million users in 25 days, topping the audience for the company’s huge hit FarmVille, according to market analyst AppData.

That makes Empires & Allies, a combat strategy social game with cute cartoon graphics, one of the fastest-growing games in history. It will also enable Zynga to show that it can produce consistent hits — something that is important considering Zynga is reportedly poised to file papers for an initial public offering any day now.

Public markets like predictable performance, and Zynga’s latest game is gaining new users at a rate of a million a day and 8 million a week now, AppData shows. As we’ve said before, the company has become a Facebook distribution powerhouse like no other game company. That makes it a lot easier for Zynga to generate revenue, since a percentage of users usually pays for items in otherwise free games.

Before Empires & Allies took off, Zynga’s CityVille, which still has 88 million users on Facebook, saw similar spectacular growth. And before that, Zynga’s FarmVille, which has 38.8 million users, was the huge hit. Empires & Allies is described as CityVille meets Risk. Just two weeks, ago, Zynga had 249 million monthly active users on Facebook. Now it has 269 million. The overall Zynga growth rate is slowing somewhat, but it shows how much Zynga’s audience can swing in a matter of weeks.

I’ve been playing it on and off since the first day, and I enjoy it when I attack others or defend my island from incoming land, sea or naval enemies. This game is more like a real game with deeper game play than the typical Zynga title. The blending of combat and casual is a big risk for Zynga, since many of its fans are middle-aged women who may not be a natural target audience for a game where you lob an artillery round at a good friend. But so far, it looks like the bet is paying off.

We’ll see if the title continues to grow on the same scale as CityVille did. If the game continues to get users, it could reach a much bigger audience than a hardcore game would typically get. The combat strategy element will address the tastes of hardcore gamers as well as many mainstream gamers who have complained that there isn’t enough game play in Zynga’s other games, such as FarmVille.

Zynga also bills the game as the “most social” game it has ever built. You can enlist your friends and designate them as either friends or enemies. Your enemy friends can attack your island and take over buildings that you own. If you want to extract resources from buildings that you have lost to your attackers, you can do so, but it costs you extra energy points. During battles, hardcore gamers may discover that there are tactics they can use to help tip the odds in their favor.

As an fyi, Zynga’s rivals better get ready for more. The company has reserved the name FamilyVille. That game will likely challenge EA’s big people-simulation franchise, the Sims.