Social networking is a competition of sorts with your friends. In recognition of that, Zynga is launching a new mobile party game called GIFs Against Friends for you to play with your friends via iMessages.

In this game, up to 32 players submit GIFs, or photos with basic animations, on a particular topic. A judge votes on which one best represents the topic.

The new game is part of a collection of 12 iMessage app games that Zynga has launched, including Words With Friends. Zynga developed the game in collaboration with Tenor, the fast-growing mobile GIF sharing platform. The title is available to play today within Apple’s iMessage app store.

It’s a different kind of game, and it was inspired by all of the ways that people are using GIFs to express themselves. 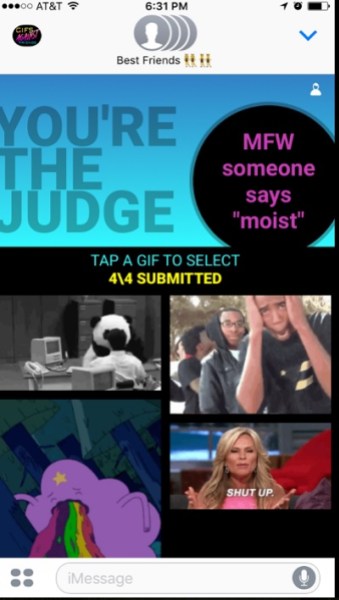 Above: Zynga’s GIFs Against Friends is an iMessage game.

“As one of the foremost game publishers on the App Store for iMessage, we’re constantly looking for new ways to innovate on how mobile users are playing and communicating,” said Mark Kantor, General manager at Zynga, in a statement. “GIFs Against Friends is a brand-new social game that’s perfect to play right within an iMessage conversation. We’re proud to partner with Tenor, the leading mobile GIF platform, in reimagining how people are connecting by bringing this engaging, entertaining GIF competition directly into the conversations players are already having with their friends and family.” 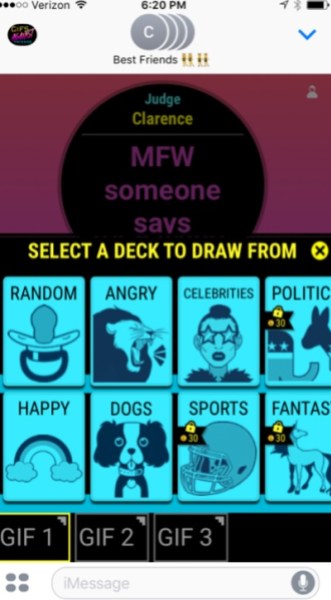 Above: Zynga’s GIFs Against Friends pits friends against each other in a photo GIF competition.

In GIFs Against Friends, players kick off the GIF gameplay by sending a pre-selected or custom prompt to friends directly in Messages. Once they’ve received the prompt, up to 32 players can anonymously submit their choice for the most fitting GIF to the entire group. The group chat judge then selects the funniest, most relevant or undeniably accurate GIF and crowns the ultimate GIF champion. At the end of each round, the winning GIF is shared within the iMessage conversation for the whole group to see.

“Messaging is quickly becoming a primary way people communicate and socialize with friends, and Tenor is defining a visual language for this new medium,” said Frank Nawabi, cofounder and head of business development at Tenor, in a statement. “GIFs Against Friends is a great example of how Tenor helps people communicate their thoughts and feelings, better than words ever could.”

The new iMessage app taps into the Tenor Emotional Graph, which is built on our 200-plus million daily GIF searches, Nawabi said.

GIFs Against Friends is available to play for free today on the App Store for iMessage.

“Across our franchises, we’re committed to driving organic growth through social innovation,” said Frank Gibeau, CEO of Zynga, in a recent earnings call. “Last month, we became one of the first gaming companies to innovate on the App Store for iMessage with the launch of our Words With Friends iMessage app. While it’s not a major audience or revenue driver for the Words franchise, the experience has created more ways to engage existing consumers and bring new players to our network.”