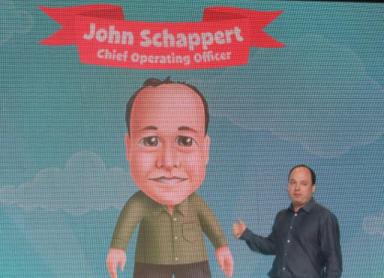 Social gaming giant Zynga is breaking away from Facebook and other social networking sites by building its own independent website with Project Z. The company gave press an early look at the service today, which will come out later this year, at its Zynga Unleashed event in San Francisco.

Project Z is basically an independent website that exclusively hosts Zynga games. It uses Facebook’s connect feature to build a social graph of your friends on Project Z. You can then go directly to Project Z to play Zynga games instead of playing them on Facebook.

“Project Z is a Facebook connect platform that leverages your Facebook friends to play in an environment tailored with just your friends,” Zynga chief operating officer John Schappert said. “We learn a lot more about our players, not just from stats but from talking to them, and this is what they wanted.”

Zynga chief executive Mark Pincus mentioned a new service called “Zynga Direct” earlier today, but Project Z is only a small part of Zynga Direct. Zynga Direct is a much larger initiative that will serve as the company’s online distribution service for games.

“It’s a platform for a direct relationship with consumers, whether on the web or on mobile, to give you a whole sandbox and create socialness about the games and not just within the games,” Zynga chief executive Mark Pincus said.

You can start a game on Facebook and continue it on Project Z and vice versa, always continuing where you left off. Starting today players around the world can create their own “zTag,” a gamer tag for Zynga’s website. The service is still not complete yet, Schappert said, but should be out soon.

Project Z has been in development for two years, Pincus said. The service was rumored last year to be a web portal that would go directly to Zynga games and bypass Facebook and other social networks.

Zynga has built its business on social games on Facebook, and it currently has more than 250 million monthly active users, according to AppData. The company has been so successful that it recently filed to go public so it could raise up to $1 billion, and it made $90 million in income last year.

As profitable and successful as Zynga has been, the company is still heavily reliant on social networking giant Facebook. Facebook takes a 30 percent cut of each transaction made on Facebook through the use of Facebook credits. Because Zynga relies on virtual good sales in its games, it is essentially handing a large chunk of its revenue to Facebook. Zynga recently began adding its games to Google+, Google’s own social networking site.