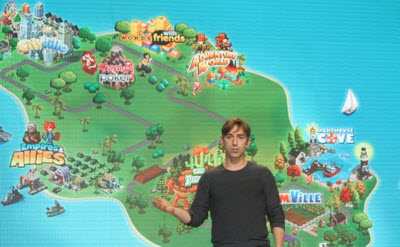 With the IPOs of Zynga and Nexon this week, the social and online game industries have their first billion-dollar public offerings. May many more follow.

That’s the spirit among social gaming rivals, including those that have been fierce competitors to Zynga, the largest of the social gaming companies. Now both Zynga and Nexon will have an extra billion dollars to buy some of those rivals, spreading around some of the holiday cheer. And the worldwide publicity from the offerings will bring new recognition that gaming is a big business and that social and online games have reached the mass market.

As we chronicled in our extensive history of the company, Zynga has come a long way since chief executive Mark Pincus (pictured) founded the company in 2007. His tale is sure to inspire other entrepreneurs. Pincus will ring the opening bell — virtually, from Zynga’s headquarters in San Francisco — on Nasdaq this morning.

Nexon went public on Wednesday, raising $1.2 billion on the Tokyo Stock Exchange at a $7 billion valuation. Zynga priced its IPO shares yesterday at $10 a share, which will enable it to raise $1.15 billion at a $8.9 billion valuation.

“Zynga’s IPO is great for the industry, providing a focal point for many to learn and get more involved in important industry trends,” said Trip Hawkins, chief executive of mobile and social gaming firm Digital Chocolate. “The IPO should also prove to be a catalyst for many future transactions that will help the industry.”

Hawkins is certainly no fan of Zynga, as he competes head to head against it every day. Peter Relan, chairman of YouWeb and CEO of social game firm CrowdStar, said, “In the western world, Zynga is the first company to bring validity to a business model that has thrived in Asia for over a decade as exemplified by the Nexon IPO.”

Kevin Chou, chief executive of hardcore social gaming company Kabam, said, “The excitement and pricing of Zynga’s IPO as one of the largest in gaming history shows just how powerful and fast disruption is coming to the industry.”

He added, “Zynga is at the center of not one but three very powerful disruptive forces.” That includes the free-to-play business model (where users play for free and pay real money for virtual goods) as a frictionless way to optimize how to charge for entertainment. It also provides technology advancements to put entertainment within reach of any consumer with an internet connected device. And it enables “social interactions that power connectivity and play.”

Chou said, “It’s the most important event in the gaming industry in the last decade, and Zynga didn’t even exist five years ago.”

Arjun Sethi, head of social game maker Lolapps at 6waves Lolapps, said, “Zynga’s IPO is an important validation for the social gaming market, which will continue its rapid growth in 2012. Zynga’s milestone proves that companies taking a data-informed approach to their product development continue to find the most success.”

Michael Pachter, an analyst at Wedbush Securities, isn’t allowed to comment on the valuation yet but said, “It’s not a surprise that they priced at the high end of the range. I think they created a lot of demand with limited supply, and expect it to trade up due to demand.”

Alex St. John, former president of social network Hi5, said, “I think it’s a good thing no matter what happens. If they fail, it will be blamed on the bad times and Facebook dependency. If they succeed, they will define the value of hundreds of online game companies that are successful and control their own audiences. The market will become highly educated about the online game business regardless of what happens.”

“What Zynga’s IPO does is finally put tangible metrics and evaluations within the social space,” said Jesse Divnich, analyst at game research firm EEDAR. “Till now the forces driving evaluations have mostly been expert-driven guest work. Now we’ll have an entire public market driving evaluations to their true value.”

But Divnich said that these new IPOs shouldn’t necessarily lead to a bunch of others.

“I do fear that Zynga’s IPO may create a surge in IPO offerings from other social and mobile game companies across the world, much like we saw in the 2000’s with the internet boom,” he said. “At the very least, having an objective measuring stick (Zynga’s IPO) will likely accelerate acquisitions in the space. Certainly those being acquired or going public will see the benefit, but I do worry that this could be part of a bubble.”

Eric Goldberg, managing director at Crossover Technologies, said that Zynga’s IPO may actually be an impediment to more social game companies going public. Other companies will want to ride in Zynga’s slipstream and insist that they do one or two things better than Zynga. It doesn’t always follow that these followers are going to be good investments, Goldberg said.

Electronic Arts and Zynga have had no love for each other. But an EA spokesman said in a statement, “If the Zynga IPO is a bellwether on social network gaming, it should be a big success. Audiences for social games will continue to grow as the content evolves from the simple game mechanic that launched the genre. Going forward, consumers will consolidate behind high-quality games on brands they recognize from other media.”