"Are you Nathan's 'Zelda loving cousin?'"

I was asked this yesterday at a BBQ. I had never heard myself described as such. I mean, it is an accurate description, but so would "Final Fantasy Loving Cousin" and " Cousin with a wit sharper than a thousand daggers." Still, I had to confirm this description. I am surely not the only Zelda-lover in the family.

"Nathan, am I your Zelda loving cousin?" 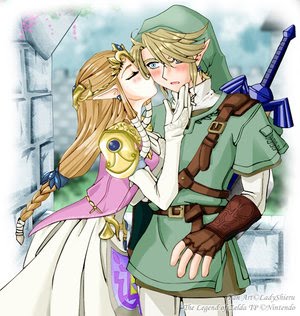 Well, I guess that answered that question. I wonder what people picture when they hear "Zelda loving?" Clearly, I picture a dastardly handsome young man but others may have different views. Can you even clearly picture someone just by that statement alone? I should have followed up the question by asking if I looked like a Zelda lover, or stating that my love for Zelda was that of childhood infatuation and I had a longing desire for Final Fantasy. Though that had come up later in the conversation. My cousin and his friend, Alex had been playing through the Zelda games and I mentioned playing Majora's Mask for the first time a few weeks ago. Alex said:

"I've never played that one, or Ocarina of Time."

"Sacrilegious! You cannot possible be a Zelda fan."

"I do like Zelda, but I prefer Final Fantasy."

Well that changes everything. Even Nathan pointed out that a love of Final Fantasy is an automatic free pass from me in all things gaming-related. Alex then pointed out something I never really thought about.

"Final Fantasy VII and Zelda Ocarina of Time came out at the same time, so it really depended on the console your parents had bought for you."

"Mine bought me both, which didn't work out so well for them."

I think we forget so often that fanboyism stems not from better graphics or the snazziest features but merely the consoles we own. I grew up on the family tree of Nintendo consoles and didn't own a Genesis until I was in college. That didn't mean Sega had crappy games, the X-Men games are proof alone that there was some serious pwnage on the black box.

Even now I think most of the fanboy crap comes from the console you own. Not everybody owns a Wii, 360 and PS3. Some of us are lucky enough to have all three. I am not so much a fanboy as I am a preferred system player. My 360 tends to gather dust unless my PS3 is out of commission (stupid blu ray drive of shititude) or there is an exclusive release. All multiplatform releases I buy on the PS3 and my Wii really is just a Nintendo-game player. This is just the pattern I'm comfortable with. Others hate the PS3 while others think the Wii is a piece of old-tech while the 360 is God's gift to gamers.

The way I see it, I love certain series and the consoles are just the route I take to satisfy my love. I love Zelda, but I also love Final Fantasy and Resident Evil and Silent Hill. I'm like a Mormon who loves his many wives (games) and uses several mail order services (consoles) to order these brides. That's how Mormonism works, right?