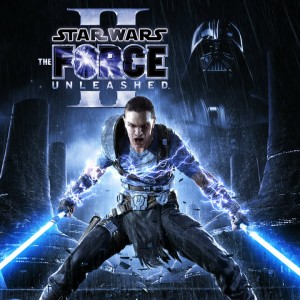 Living inside of me, there is a fourteen-year-old boy wearing a shirt emblazoned with a battle scene – an X-Wing and Tie Fighter doing battle in view of the Death Star. In his hand is a dog-eared copy of one of the books in the Thrall triology. It is this part, the little me proudly tending his chin farm of sparse hairs and stealing glances at Amanda in Geometry class, that responds when Star Wars video games come calling.

It’s a painful affair when I have to take aside my inner teen and explain to him that Star Wars: The Force Unleashed isn’t what he’d hoped. He lives in a time before The Phantom Menace, after all. He doesn’t see what looms over the horizon.

As a design document, TFU has always been a behemoth. The premise is proudly on display right in the title – you play as Starkiller, the former apprentice of infamous sith lord Darth Vader, a Jedi straddling the fence between the light and dark sides of the Force. Starkiller is a Mountain Dew flavor enriched with midichlorians, the love child of Star Wars fan fiction and the X-Games. The overall presentation is a simple one : in this game, you use the Force to eff stuff up. Sometimes, there are explosions, too.

Unfortunately, as an actual game, TFU had shortcomings. Now we have the sequel, and while I’d be willing to give the benefit of the doubt to someone telling me that the team at LucasArts tried to address some of those grievances – its apparent that someone was tinkering behind the scenes – Star Wars: The Force Unleashed 2 takes a few stumbling steps backward in some crucial departments.

Graphically, TFU was muddled, and while this game raises the bar, The Force Unleashed 2 still rests on the near slope of the Uncanny Valley. The level designs are clean, though seemingly uninspired, and a lot of the variety from the first game is pared down. Most of the environments are some play on sterile starship decks or techno-scapes. There isn’t as much random clutter to frustrate your attempts at using debris and Force Grip to fire off impromptu missiles, though this creates two effects that are both noticeable at times : the absence of any real features in some of the rooms, and the difficulty presented in discerning whether or not objects in the environment can be manipulated or are backdrop scenery. 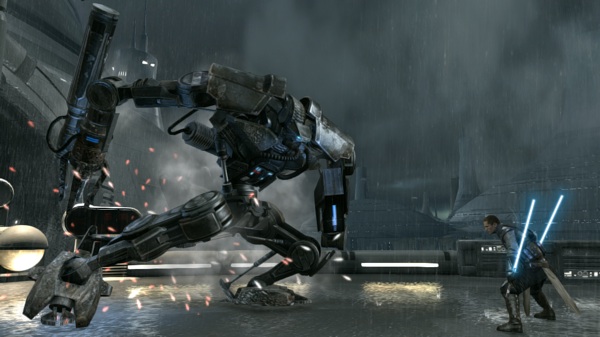 As usual for a LucasArts effort, the audio is good. All the old favorites and musical pieces are there. It does, though, sport a few black eyes behind concealer. Voice acting is uneven, as Starkiller’s mood swings would indicate an un-diagnosed bi-polar disorder. The returning General Koda, the blind Jedi that serves as Starkiller’s mentor after he rebels against Vader, serves a secondary purpose not listed on the game’s box art as a feature – his constant yammering will help you exercise your hands as you grip the controller tightly exercising the patience necessary not to shout at your television to shut up, already.

Combat was plopped down on the potter’s wheel for a molding. In an attempt to increase the difficulty from the first outing, where players would often breeze by set encounters by spamming the same Force powers over and over, the enemy types have been infused with variety that requires attacking with different abilities. Jetpack troopers have to be buffeted with Force Lighting. Sith Acolytes resist your Force assaults and can only be defeated via lightsaber combat.

Things still feel a bit easy, though. On Hard difficulty, once I got down the patterns and realized that some abilities were just more useful than others, even still, I breezed along hardly inconvenienced by the best the Empire could throw in my direction.

Which transitions nicely into The Force Unleashed 2's biggest failing : the strikingly sour plot. The storytelling here is lackluster, at best. Starkiller, as an antagonist, does us absolutely no favors in the attempt to get behind his conflict with Vader. He is wholly consumed with the pursuit of his lost love, Juno, to the detriment of his friends and the same Rebel Alliance supposedly born out of the ashes of his sacrifices from the first title. With his alternating between screaming and whining, he seems a distended characiture of Luke Skywalker’s worst traits.

This relationship is a frivolous thing for us, the outsiders looking in. Even if a person did finish the first game, it’s hard to escape the lurking question of just what’s so special about what’s between Starkiller and Juno. It serves as deus ex machina; it is Starkiller’s only real motivation for moving forward. He is callous in his care for the pressing business of whether or not he was actually grown in a test tube and may degenerate from cloning sickness. Juno is all the matters. A fact he makes abundantly clear at every able opportunity.

Just when things seem to get going, they come to an abrupt end. For a game in the era of Xbox Live, this length from start to finish is a hard sell without multi-player. The more I find myself purchasing games with short campaigns and little to no online offerings attempting to beef up the metric used to measure total content with the inclusion of “Challenge Maps” – present in abundance in Force Unleashed 2 – the more dissatisfied I find myself spending good cash on a game I could’ve finished on a rental with time to spare. 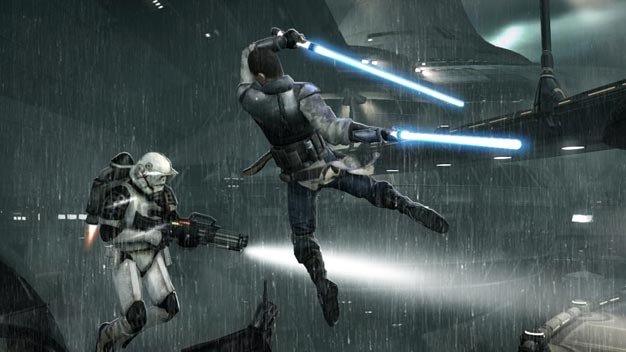 When we tally the points, things don’t come up in the game’s favor. Well-intended changes to the combat engine, coupled with the growing influence of Kratos, leave the gameplay feeling superficial. With the fun factor inconsistent, it draws even more attention to a middling plot, what little of it there is.

In the end, this game is going to end up in the hands of its demographic, and I wonder if any of these things will matter to them. While Starkiller’s second foray fails to impress, it isn’t terrible. George Lucas managed to murder my inner Wars geek, but plenty of young lads escaped those killing fields to move from their old rooms into the basement, grow beards on their necks, and buy plastic dolls they never intend to remove from the packaging by the truckload.

The thing that makes me somewhat sad about The Force Unleashed 2 is that the game attempts to be a lure for me to join them but just ends up serving as a reminder for why I won't.