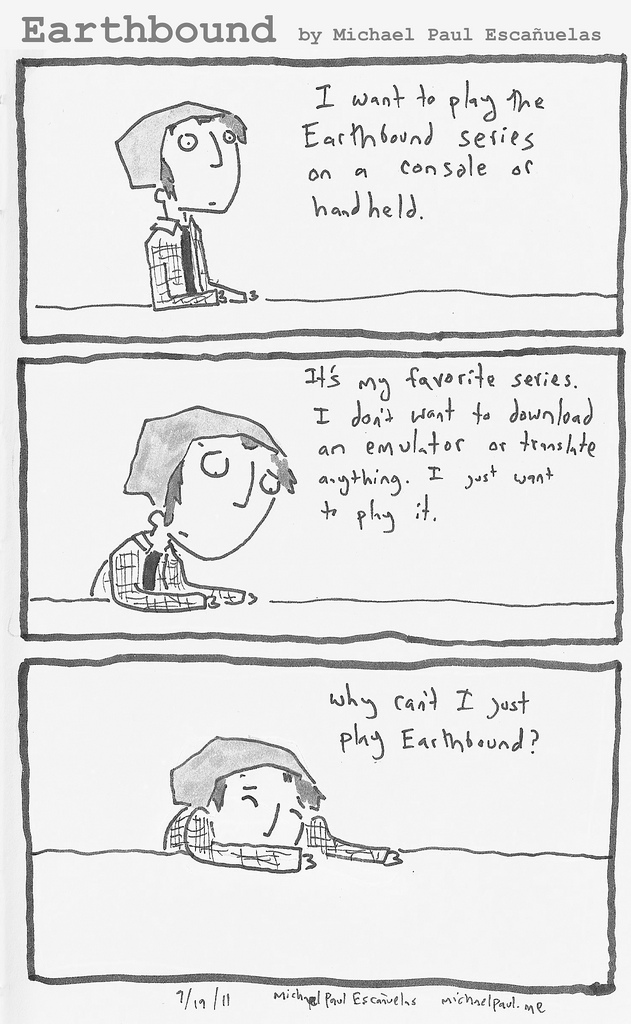 It was late, my girlfriend was asleep in my bed, and all I wanted to do was play a little Earthbound. I looked around my room and saw my retro collection of games boxed away under my desk. To get them out would make a lot of noise and honestly, would be a hassle. I then looked towards my Wii. Earthbound is of course a Nintendo game, so naturally Nintendo of America would release one of the SNES' most unique games on their Virtual Console service, right? No, they didn't. Okay, I thought to myself, that's fine. I'm sure they have a date set for its release, or at least mentioned it at some point. No, they have not. Well fuck me.

This brought me to my last resort; Emulators. Yeah I'll admit, emulators are cool and convenient, but there's just something missing when playing emulator versions of games. I want an official version that I can throw money at and enjoy until the end of time. I sit in front of my computer enough already. I don't want to do it as I play my classic games.

I suppose my biggest grip with this situation is based on two things. First of all, why does Nintendo ignore the Earthbound series so much? Based on the fact that it's such a unique experience, it would seem right that a company like Nintendo would love to continue a series with a cool take on RPGs. The offense does not just lay in their refusal to release Earthbound to current gamers, but also in the fact that Mother 3, the sequel to Earthbound, never actually made it stateside, nor did the original Earthbound game on NES. I remember being on Tumblr, the greatest blog site ever, and seeing people blog screen caps of those games with some random dude's translation. Again, why can't I have an official version I can throw my money at?

You see both of these issues could be solved by one awesome solution. Release the collection on the DS with all three games. Rather than giving us Ocarina of Time for the 20th time, revamp the Earthbound series for a new generation. That game's humor, writing, and music is still fresh to this day. But I doubt that will happen anytime soon. 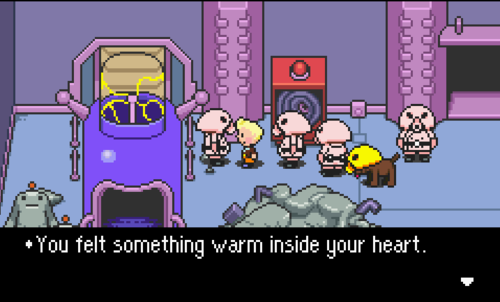 This brings me to second reason this situation bothers me. Why does Nintendo not listen to their audience? Think about it, Nintendo does not give a shit about its crowd. Even during the Gamecube era, Nintendo did not care what people told them, they did made whatever they wanted and banked on the iconic characters in their library. Was there ever a poll for what games they should release on Virtual Console? No, they just said shut up and gave us River City Ransom. For the love of god, I'd give up all the shitty games on Virtual Console just for Earthbound. Now the fact that Earthbound is not available would be okay if we knew about a really cool edition coming soon, but we have received no word. A rumor here and there is all the hope we have to live with.

As my girlfriend began to snore, I was booting up the SNES9x emulator on my computer to play through one of my favorite games in SNES history. I was upset, but someday, just maybe, fans of the Mother series will have their day. Nintendo cannot ignore the series forever. I'm sure right now they are working on a 3DS port of all three games, with updated graphics, plenty of extras to unlock, online co-op, leader boards…etc. Yeah I know none that crap will happen, but I do know eventually we'll get all three games stateside. I know it's bound to happen sometime on this planet of ours…my god.