Axel has been described by fans as an irredeemable asshole, a big woobie who's head-over-heels in love with Roxas, and everything in between. I've seen people split into groups and argue whether Chain of Memories Axel or Kingdom Hearts II Axel is the "real" Axel. However, after completing 358/2 Days and finally filling in the connecting storyline, I think it's worth taking another look at whether the two “different Axels” are really all that irreconcilable. 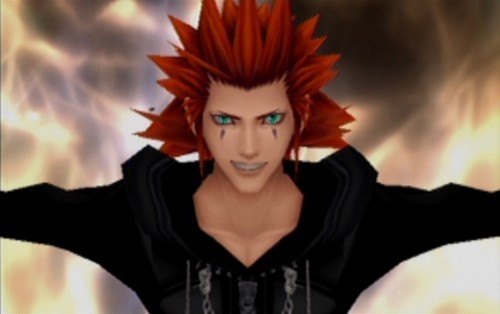 Let's start with the basics. As explained to me by my Japanese speaking friend, Axel's “title” in the series translates into English as “Flurry of Dancing Flames,” but this doesn't quite capture the meaning of the original Japanese. The English title implies that Axel himself is fire, but the literal parsing of the Japanese phrase (according to my Japanese friend) is more like “dancing fire's wind.”  So in essence, Axel isn't the fire itself, he's the wind that makes the flames dance. This is not just a bit of trivia for the linguaphiles among you.   I believe that Axel's Japanese title is a perfect metaphor for his role and behavior in the Organization. He moves through the flames of betrayal and intrigue that consume the other Organization members, making everyone dance to his tune but completely untouchable by their schemes – just as a breeze manipulates a fire without ever being burned. There's no doubt he can hold his own in a fight, but his real strength is psychological. Axel's a schemer, through and through, making him perfect for the job of assassinating traitors.

In modern, enlightened society it's considered ethically questionable even to assassinate an enemy leader to win a war. But in the ancient past assassination was recognized as a useful political tool – many Roman Emperors fell to assassins seeking to further their own agendas. Modern man eschews assassination solely for moral reasons; in a purely practical sense there's no disputing that it can be extraordinarily effective.

The Nobodies of Organization XIII, lacking hearts and emotions, are equally bereft of the moral quandaries and attacks of conscience that humans are subject to. Axel's role in the Organization – to be willing to kill even his closest comrades if the situation calls for it – would seem despicable to a human. But Axel, literally heartless, can carry it out with mental impunity. He doesn't care about the comrades he kills because he can't. He feels no remorse; his only concern is staying on his boss' good side to keep himself safe.

Of course, there is a little more to it than that. Because what we see in Chain of Memories clearly shows that that Axel doesn't just tolerate his duties, he enjoys them (inasmuch as a Nobody is capable of joy). But without the burden of guilt, why wouldn't he? One has only to consider the popularity of games like Grand Theft Auto, of characters like Light from Death Note or Dr. Gregory House, of all these fictional people who place themselves above and beyond societal restrictions, to realize that humans are intrigued by the concept of such freedom. Freedom from personal responsibility, or from the burden of morality. Take away remorse, and Axel is left only with the thrill of the game. The man is clearly tactically brilliant when it comes to manipulating others; of course he's going to revel in putting his abilities to the test. 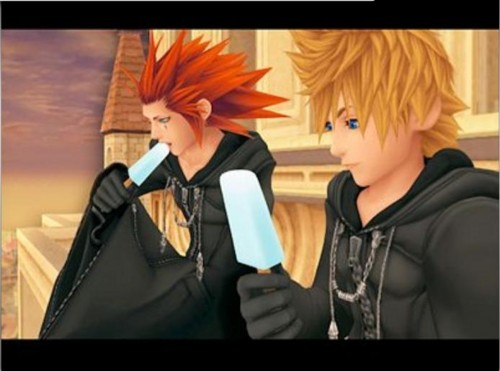 Therefore when we describe Axel's character in Chain of Memories, we need to be careful with the terminology. Yes, he's a merciless and manipulative son of a bitch. But even so, he has no real malicious intent. He's heartless because he's literally without a heart, like all the others in the Organization. He's amoral rather than truly immoral, and therein lies the all-important distinction. He takes his satisfaction not from cruelty to others, but from excelling in his plotting.

Before I talk about Roxas, a brief aside. For the sake of argument, we have to assume here that Roxas in every practical sense has a heart. Whether or not it strictly resides in his body is up for debate, but ultimately irrelevant to this discussion; the point is that he can and does feel true emotion. He is the only member of the Organization – Axel included – to express real concern over the fates of the members sent to Castle Oblivion. His fears for Axel's safety leave him constantly distracted during missions while his friend is away. When he tries to bring this up with others, they laugh him off – as does Axel upon his return, joking that Roxas couldn't possibly have been worried without a heart.

With 358/2 Days, we are finally shown the gradual development of Axel's personality from the arrogance of Chain of Memories into the desperation of KH2. And I admit that I’ve often complained about the pace of Days' storyline, but for all that I think there are way too many ice-cream scenes, through them we really do see the gradual changes that being in Roxas' company evokes in Axel. We see him gradually affected by Roxas and Xion's company, coming to truly consider the two of them as "best friends.”

The exact mechanism of this – as in the literal mechanism of how a Nobody can come to have friends – is questionable. And, in my experience, another sticking point amongst fans. It doesn't just apply to Axel, either. If one cannot feel emotion without a heart, how then does Saix exhibit rage? How do Vexen and Zexion display fear just before their deaths? In their last meeting, shown in Final Mix+, Axel asks Roxas whether he really has a heart – and whether Axel and Naminé really lack hearts. We're never given an answer to this, and I have my own theory, but since it's purely speculative I'm going to stick to what we're told in-game. 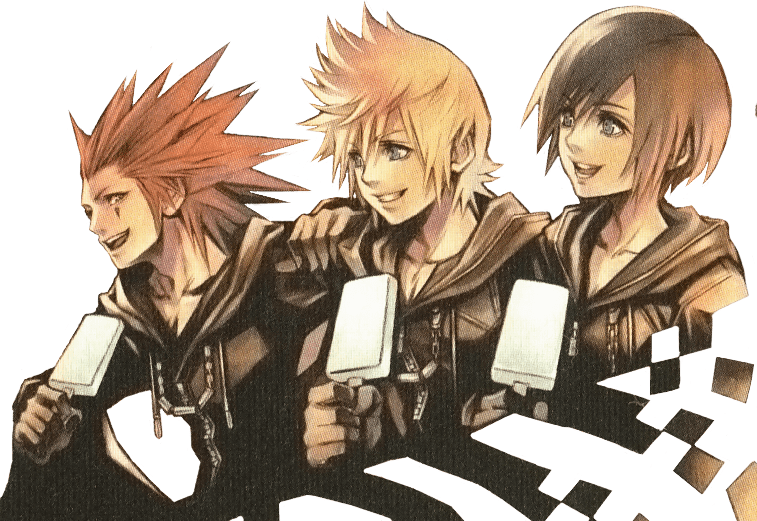 In 358/2 Days we're told explicitly that Organization members – with the exception of Roxas and Xion – all have memories of their past lives. According to Axel, this is where Nobodies' apparent emotions come from. When a Nobody thinks about something that they know should make them fearful, their mind remembers what it's like to be scared. The same, I assume, applies for other emotions. Nobodies don't feel emotions, but so much of how we think and act is habitual rather than as a result of true feeling that their personalities remain even after they lose their hearts. As Axel says, "Even we Nobodies have things we don't want to lose." The Organization members' memories allow them to act as though they were human, even without hearts.

So in general terms, Organization members retain personalities thanks to their memories of their previous lives. This is supported by the fact that Roxas, who lacks memories, is often referred to as absent-minded or "spacing out" early in 358/2 Days, and shows very little in the way of personality for his first several weeks as a Nobody, giving a lot of blank stares and repetitive responses. (In the 358/2 Days manga, he’s shown as a totally blank doll who needs to be propped up in his chair.) Thanks to their memories, the Organization members are still individuals, not mindless automatons. On the one hand we have Xaldin, who scorns the very idea of emotions as a weakness to be avoided, and actively seeks to suppress any semblance of feelings – he actually scolds the other Organization members for acting as though they have hearts (Final Mix+).

And on the other hand, we have Axel, who in Saix's words ‘can't stand the emptiness of living without a heart’. More credence is lent to Saix's opinion by the recent revelations that the two were, if not friends, then at least partners or co-conspirators – but it also works as a theory because it just plain fits all the evidence. Axel says in the 358/2 Days Secret Reports that hanging around Roxas evoked strong memories of what it was like to be human. While we can only guess at what Axel was like before he had a heart, his brashness and arrogance even as a Nobody hint at a strong, impassioned personality. He perfectly fits the fire element stereotype – impulsive, extraverted, always on the hunt for excitement.

The loss of the ability to feel would undoubtedly hit such a person extremely hard; it's not surprising Axel would yearn for the ability to feel again. As Roxas gradually becomes Axel's strongest tie to the faux-emotions of his memories, he therefore also becomes the most important thing in Axel's life. Now that he has the illusion of humanity, Axel can't bear the thought of returning to the empty shell that he had been before; even the thrill of backstabbing power politics would surely pale in comparison. Moreover, reminded of what it's like to really feel, Axel can no longer carry out his duties with the blithe apathy he exhibited in Castle Oblivion. He admits in the Secret Reports that while he used to be able to lie effortlessly, lying to Roxas hurts. And there's a very telling line when he comes to force Xion to return to the Organization –“I always get the nasty jobs.” Although his jobs have always been nasty, it's the first time he really admits it to himself – and he does so with obvious distaste. In the end, it's only under physical threat of imminent extermination that Axel grudgingly agrees to go after Roxas – and even then he tries everything he can think of to bring Roxas back rather than destroy him. At this point Axel is still acting ultimately in his own interest, choosing his life over Roxas' – a minor strike against his character perhaps, but a lot of humans would make the same choice. Moreover, the decision clearly costs him. By the time he meets Sora in the path to the World that Never Was, Axel has reached a point where he's willing to sacrifice even his own life to save Sora's. His redemption is completed with one final attempt to recapture the human compassion he once had.

All this considered, I really can't see how Axel's shift in priorities from "whatever suits the Organization and keeps me entertained" to "whatever keeps Roxas alive" is at all implausible. On the contrary, I think it makes him one of the most intriguing character arcs in this entire series. We're not talking about two separate Axels, we're talking about real, believable character development – and a fairly moving storyline besides. Saix may dismiss Axel's hunger to feel as weakness, but as Xemnas asks – wasn't something in Axel awakened thanks to that very 'weakness'?

For more of my musings on Japan and Japanese gaming and Kingdom Hearts and Final Fantasy and everything else in between, visit my blog at http://themolloyboy.blogspot.com/