Three years ago I started a mobile app business. At that time, apps were a novelty and smartphone owners tried out new apps on a regular basis.

Today, the market is oversaturated with new apps, and to make things worse, many smartphone users have simply stopped downloading new apps altogether. To validate this, ask yourself when was the last time you downloaded a new app? Exactly…

Mobile apps are deep in the trough of disillusionment. 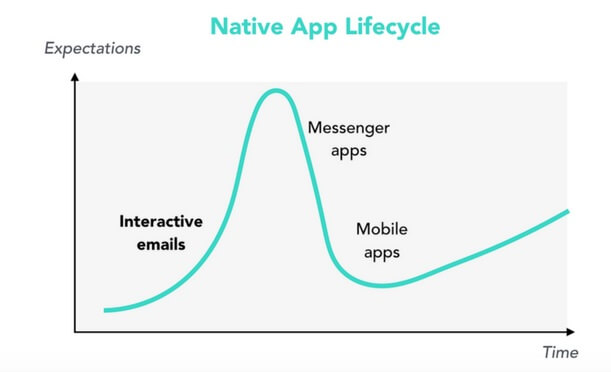 In China, native mobile apps never took off the same way they did in the US. Instead, developers build rich applications inside their instant messaging apps like WeChat. No need to download a new app — just add them as you would a contact in Messenger.

Facebook is running after this model with Messenger and Whatsapp. This sounds great news for developers at face-value. But when a platform owns the users, and businesses are willing to compete for user attention, the platform gets to extract the profit margin.

Email is the dark horse

Is it possible that most businesses are completely underestimating the potential of email? You better believe it. Look at the advantages that email has over other communication channels.

1. Email is designed for mobile. I actually prefer to check my emails on my phone.

3. Email works on any operating system. No need to redesign for iOS and Android.

4. Email is quick and easy to customize. Want a button? Add a button. It’s just HTML.

5. Emails are a great channel for AI. Hit reply and write back in natural language.

6. Emails don’t need installation. Just open them and there they are.

Virtually no one knows interactive emails are even technically possible

Since emails have no JavaScript, the programming language behind most web interactions, we tend to think of emails as a “read-only,” one-way channel; good for sharing calls to action that get people back to your website.

If you think this, you are completely wrong.

CSS3 does allow for basic interactions, like switching tabs, without any JavaScript at all. Mark Robbins of RebelMail describes a technique called “Punch Card Coding” that uses CSS alone to allow users to click buttons that change what they see on screen, essentially by having every permutation as a different “tab.”

The following GIF shows interaction within a shopping cart inside the email client.

The “buy now” button takes the user directly to online payment. This is a really big deal. There’s no need to download and install a separate app. No need to sign-in to an account. All you need to distribute this simple application is an email address.

Startups that focus on email already have the upper hand

Ask any marketer about email and you’ll hear that “the money is in the list.” Some of the most successful startups today use email as a core channel for user engagement.

Product Hunt started life as an email list and today email still represents its biggest channel. Baby2Body, a startup I’m advising, built an entire service for pregnant women and new mothers entirely through email based on their due date/date of birth. Today it’s 10X cheaper to acquire an email sign-up compared with an app install. Inside.com pivoted from mobile apps to newsletters after it realized the engagement in its newsletters greatly surpassed its own mobile apps.

Above: Inside.com recently pivoted from mobile to email

These examples reveal a common misconception about email. Having too much email isn’t a problem. The problem is that we get too much bad email. And there are massive opportunities to create great email that can make life better.

Taking emails to the next level

Since I learned about interactive emails I’ve been thinking about how mobile services could adopt them to create better experiences for users. For some companies, it’s a way to leave the native app sh*t show altogether.

And to the millions of entrepreneurs dreaming of building yet another mobile app, why not get ahead of the curve and build an “email-first” application?

[This story originally appeared on the author’s Medium page.]

Dave Bailey is Entrepreneur in Residence for Downing Ventures. He previously built and sold tech businesses in UK, US, and Brazil. You can read about his lessons learned during 10 years as a tech founder at Dave-Bailey.com. Follow him on Twitter: @davesuperman.