Mobile ad fraud is an enduring problem that is costing marketers a small fortune. Estimates vary wildly, but we know this for sure — somewhere between $7.2 billion and $16.4 billion is being lost thanks to ad fraud.

And thanks to a new study released today by Tune, which takes in data from 24 billion clicks and analyzes over 700 ad networks, we now know just how bad things are at a network level.

In fact, the analysis shows that eight ad networks consist of nothing by fraudulent clicks. Another 35 networks are revealed to contain more than 50 percent fraud.

“There’s a ton of ad fraud in spite of massive and ongoing efforts to exterminate it,” John Koetsier, mobile economist at Tune, told me. “That’s because most solutions to date have focused on a single slice of the ecosystem — the ad networks — or viewability at the audience level. In reality, however, the ad ecosystem is tremendously complex, with easily 10 different types of players between marketers and their customers.”

So how are those that profit from mobile ad fraud getting away with it?

“Fraudsters capitalize on complexity and use the cracks in the system to inject their poison,” Koetsier said. “To fix fraud, marketers need tools that surface all the layers and show them exactly where their ads touch real, live, breathing people. Perhaps shockingly, so do ad networks, because when you add re-brokering, sub-publishers, and exchanges into the mix, many ad networks don’t actually know where all of their supply actually comes from in real time.”

And while Tune has an interest in the results of this study, nobody can deny the relevance of analyzing 24 billion clicks to help determine what is going on with mobile ads in 2017.

Of more than 700 networks studied, only a tiny percentage can say they operate with a clean bill of health. 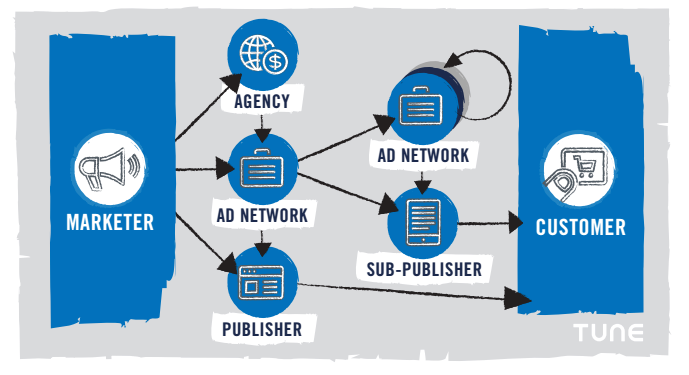 “Fraud is pervasive throughout the ad ecosystem,” Koetsier said. “We only found 23 ad networks with scale (over 100,000 measured clicks) that had zero percent fraud.”

As an average, fraud across all networks is just over 15 percent, but Koetsier believes that we’re not going to solve this prevalent issue by pointing fingers at the ad networks alone.

“As hard as it is to say, marketers have in some cases been almost complicit,” Koetsier said. “They’ve been evaluated — and in some cases compensated — based on front-end metrics like views, clicks, and installs, which are relatively easy to game, and not on back-end metrics like actions taken, qualified leads generated, actual sales made, or deep mobile app engagement demonstrated, which are much harder to game. That has led to occasional risky behavior on the part of some marketers, which opens the door for the fraudsters, who are only too eager to help you hit easily gamed metrics.”

The full report is available from Tune today.