Smart game developers are choosing startup ad companies like Vungle and AdColony when monetizing their mobile games, according to a new survey by VentureBeat. At least, if they want to make significant amounts of money.

They are most certainly not picking Google. 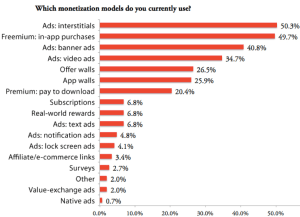 The data clearly shows that game developers abandon Google once they hit 11 published games. While Google wins in the fat long tail of solo and small-team developers who have built fewer than 11 games, with 77 percent developer share there, game-makers who have made more than 20 games, have more than 20 developers, and bring in more than $50,000 every month are much more likely to not use Google.

Instead, the most successful game developers use video ad platforms Vungle or AdColony, and to a lesser extent Chartboost, iAd, and Upsight (the new Playhaven/Kontagent).

That’s good news for all video ad companies, as their ad vehicle typically generates high eCPMs and can, in the right circumstances, also claim reasonable levels of user engagement.

The sad-sack banner ad came in for special abuse. 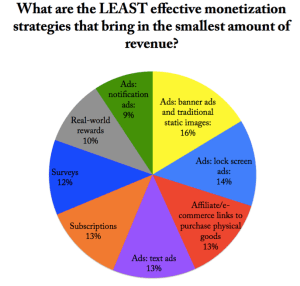 Not only is it ranked as the least effective monetization method, developers also consider it the most annoying for users.

And yet, as Flappy Bird showed us, there is still a place for the oldest version of digital monetization in at least some games. When the game mechanics are right, and there is a big enough audience, even banner ads can bring in six-figure weekly incomes.

We also asked developers which monetization methods their users found most annoying. Banner ads topped the list of course, but video ads and even text ads are also there: