Ad tech firm 33Across is today offering a startling guarantee that any other industry would consider tablestakes.

That’s not the standard in the online ad industry. The viewability standard, offered by the Media Rating Council, sets the meager goal that at least 70 percent of a digital campaign’s ad impressions must show at least 50 percent of the ad’s pixels for at least one second. Last year, Google said its data showed that over half of online ads are not on the screen for even one second.

Leaving aside the question of why a half-visible ad would have any value, that’s only part of the problem. The other is fraud, where websites and others use software robots (bots) to artificially run up ad impressions, the metric by which many advertisers pay the sites.

33Across’s Real Platform, announced today, is guaranteeing that all of its served online ads will be seen by, you know, real humans. The whole ad.

It joins a similar announcement today by Millennial Media, which covers viewability of ads in mobile apps while 33Across is focused on the desktop.

Founded in 2008, the New York City-based company previously offered a publisher platform that emphasized “in-view” ads — ones that deliver a full impression — although there were no guarantees.

The company creates ad units on sites, sometimes displayed in empty columns and other page spaces that aren’t otherwise used. All the ad units are kept above the fold with such formats as “adhesion” ads that stay in the viewable window even when the page is scrolled. The idea is to avoid serving ads to spaces at the bottom of pages that users may never scroll to. 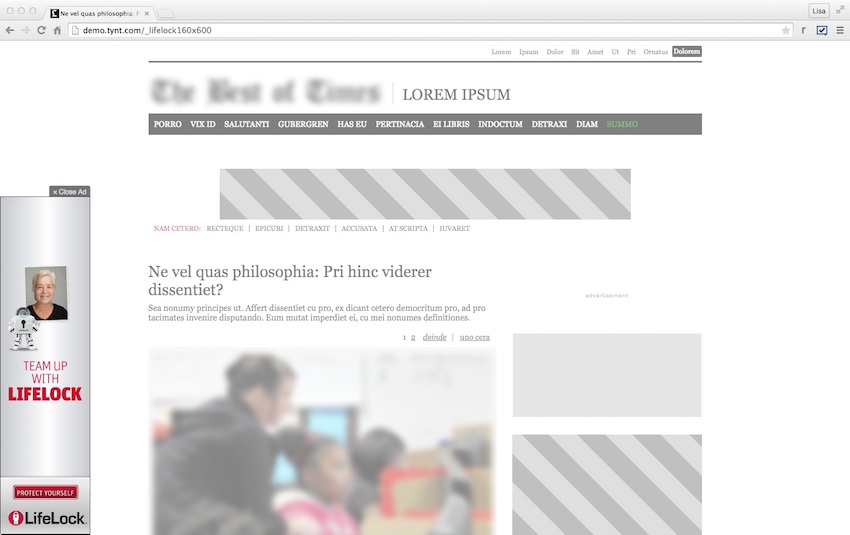 Above: A 33Across ad, served to an otherwise empty column, will remain in view even if the user scrolls.

CEO Eric Wheeler told me that his company’s new platform, which uses AppNexus technology for ad serving and Integral Ad Sciences as a third-party anti-fraud verifier, improves on the previously existing in-view tech and offers several other new approaches.

First, publishers are vetted to make sure they’re reputable. There’s a 12-step process to ensure the publisher sites frequently update, have original content, and are not engaged in traffic or impression fraud. The vetting — applied even to such brand-name customers as Viacom, Hearst, the Daily News, and Demand Media — is repeated every seven days. The company says over 500 publishers, which signed up in the now-concluded beta period, interact with over 200 advertising entities — demand side platforms, agency trading desks, and the like.

The Real Platform doesn’t just vet sites; it also vets “users.” That is, if the integrated Integral Ad Sciences tech is suspicious that a “user” coming to the site and loading the page is, in fact, a software bot designed to generate fake impressions, it simply will not serve the ad.

Because Real’s ads are often served to spaces on a page that are otherwise empty, the missing ad wouldn’t necessarily leave a hole in the page. The company says this placement also increases clickthroughs, because the unusual location catches attention.

Wheeler told me the Real Platform has scored 98 percent viewability with no fraud during the beta, although the company will guarantee 100 percent and refund the difference. The missing two percent, he said, might include pages that are abandoned before they are fully loaded.

Currently, the guarantee only applies to desktop viewing, although 33Across said it is working on adding mobile.

The company claims its ads are generating eight times the standard clickthrough rates, and, although the guarantee is viewability for one second, 33Across claims the average view is an astonishing 63 seconds.

Wheeler noted that “people have said 100 percent viewability is not possible,” and added that no other platform is offering this guarantee. Some platforms like Zedo, he said, emphasize in-view ads, but “everyone is delivering to [the Media Rating Council’s] standards.”

Wheeler predicted that “we’ll see more publishers move to this [kind of] structure,” because the current ad system isn’t delivering.