When it comes to marketing, social is cheapest and ad exchanges help you target the highest-quality consumers, but nothing beats using your own data to improve your digital ad campaigns.

In fact, using your own data makes you up to 98 times better at driving conversions.

Digital identity and data provider Neustar released its second-quarter 2014 digital advertising report today. It’s based on 220 billion digital actions inside 1,800 companies’ campaigns, and if it shows one thing, it’s that data is probably now the single most significant corporate competitive advantage. 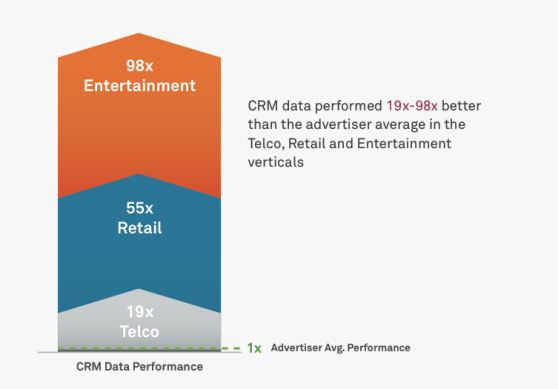 Entertainment companies that used their own private data to target advertising saw average conversion lift of a staggering almost 10,000 percent — the 98x you see above. Retail companies were only half as good at achieving a similar result, with 5,400 percent or a 55x lift. Telco companies — don’t we love getting marketed to by them — achieved 19x average conversion, or 1,800 percent improvement, by using their data to drive digital marketing campaigns.

This, in an ecosystem where digital marketers scratch and claw for fractions of a percent improvement.

A big part of the improvement, of course, is using data intelligently. When you’re targeting known users who have completed known actions at known times, it’s much easier to anticipate demand or need — and timing of that need — accurately.

“The trick is, the better you are at understanding the quality of the userbase, the better you can carry on a conversation,” Neustar’s VP of media and advertising, Rob Gatto, told me yesterday.

While using CRM data is powerful, the fact for most companies is that they simply do not have data on consumers they want to convert into customers. For those, the next best bet is “third-party audiences,” collections of consumers assembled by digital marketing data companies such as Neustar based on demographic and intent factors.

Above: Third-party data can also help improve ad campaigns when you don’t have owned data

Doing this enabled education companies, for instance, to achieve 26 times average advertising performance, and gave telcos 12 times better conversions. Not exactly 10,000 percent better … but nothing to sniff at either.

Regardless of the private or publicly available data used to inform ad campaigns, Neustar tracked digital ad spend across social channels, ad networks, traditional portals, and ad exchanges — pretty much everything except search advertising. Digital advertising is a $43 billion ecosystem, of which slightly less than half is search advertising.

The results of the study, according to Gatto, show that social is still cheap right now. And effective in targeting users, thanks to Facebook. 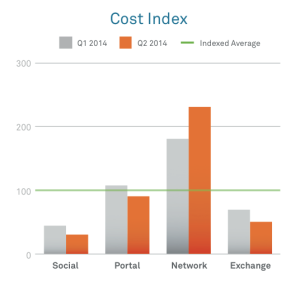 Above: Social ads are cheap …

“Social continues to drive the cheapest cost and reach efficiency combo,” he told me. “If you are in the cookie world today … social is the place to find a more static user over and over again, and reach them more uniquely — mostly driven by the fact that we’re logged into Facebook everywhere.”

That’s also why social channels are effective at delivering new and exclusive users.

Ad exchanges, however, which provide the capability for multiple brands to buy ads in a single place from multiple ad networks, typically deliver what Gatto calls “quality users.” Since they do a good job of tracking users across devices and platforms, they also enable advertisers to target the same user repeatedly, enabling a longer-term conversation.

That’s important, Gatto said, because we’re moving beyond clicks. In fact, he said, the click — and traditional attribution — is “dead.”

“Attribution by itself isn’t enough,” he said. “Attribution is about assigning credit, but what you really want to understand is the journey the customer is taking … and what is the optimal sequence and frequency of messaging to help them on that journey.” 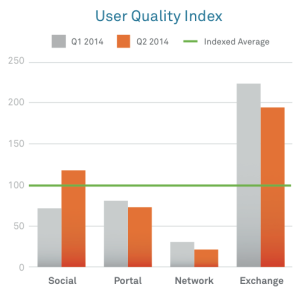 In additional, marketers need to understand the concept of overlap, where they’re hitting the same customers with multiple levels of marketing: brand awareness in the upper parts of the funnel and performance marketing in the lower parts of the funnel, where advertisers are trying to drive specific conversion actions.

One other interesting finding? Video is booming.

The data Neustar shared in its report comes from its acquisition seven months ago of Aggregate Knowledge, which tracks all of the digital advertising that its clients run.