The next time you decide to walk into a real store, zillions of digital bits are working overtime to figure out why.

The newest system undertaking that task, being announced today, is something with the soporific name of the Location Conversion Index (LCI).

The intention is that this will become the industry’s way for determining which parts of a digital media campaign — mobile ads? website ads? social marketing? — coaxed you to walk into that clothing store.

“It’s kind of like a new GRP point for us,” ZenithOptimedia senior vice president Yale Cohen told me, referring to the traditional impressions metric of a gross rating point. Except that LCI measures which parts of a digital campaign boosted foot traffic.

To solidify that position as an emerging standard, LCI is now rolling out to 75+ media partners, including AOL, Yahoo, ad agencies, and independent ad networks. Any of the partners will be able to use a customized online dashboard to track in real time the increase in foot traffic from their media spends. The platform can help determine which media spends (websites versus mobile ads, for instance), which audience segments, or which ad/publisher networks are most effective.

Kohl’s department stores and six other existing ZenithOptimedia clients have been testing the new system, which is now available to new clients.

Trying to increase your conversion rate?
Join us for our webinar on conversion optimization.

ZenithOptimedia and NinthDecimal point to LCI’s omni-channel and cross-device measurement of the increase in in-store visits as providing “the most accurate marketing ROI [return-on-investment] attribution.” 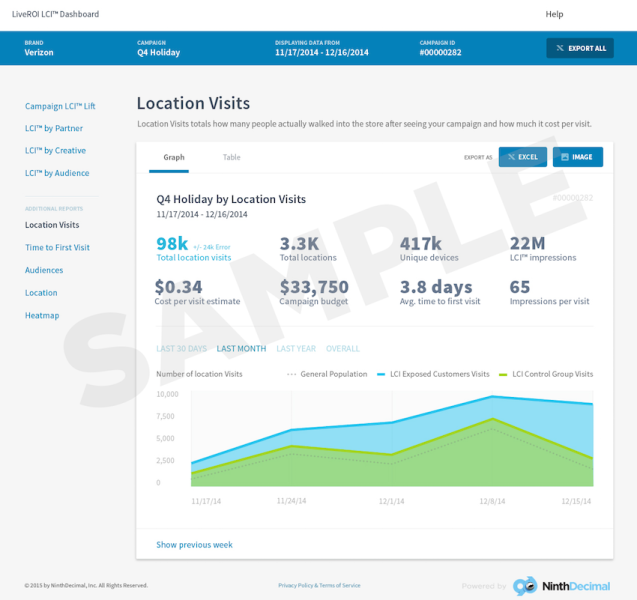 Above: A dashboard screen from LCI

But, although some other measurement platforms are reporting point-of-sales data in real time, LCI doesn’t continue through to an actual purchase.

LCI is “not being tied to purchase data,” Cohen told me. “It’s the last step before purchase.”

Potentially, that bottom-line final result can be inferred from other stats. For instance, if there’s a rise in new shoe sales in the same week as there’s a rise in foot traffic to that shoe store, you can infer a connection.

The omnichannel, multidevice coverage of LCI is built around the original, GPS-based mobile location-tracking technology developed by NinthDecimal. That mobile tracking, Cohen said, “can pinpoint if the person is in the store, next to it, or driving by” with 99 percent accuracy.

David Staas, president of NinthDecimal, told me that “a major new capability [of LCI] is the multichannel approach.”

The challenge is solving what might be called The Digital Marketer’s Dilemma:

A number of marketing/ad platforms, such as Adobe, claim some ability to track that anonymous, device-jumping user.

A visit to a clothing store website on an IP address-tagged computer, followed by a search to that same website on a nearby GPS-located smartphone, for instance, can indicate it is probably the same person.

But consistently making correct inferences is what engineers call “a non-trivial task.” That is, it’s a big deal to do it right.

The agencies emphasized LCI’s “[unmatched] precision and scale” of attributing foot traffic to campaign factors across devices, but the methods for determining the same user across devices are murkily described as processing “a trillion data points from over a billion devices.”

Whether or not LCI becomes a standard, it’s now clear that there has never been so much effort to follow what your feet do.