Advertising dollars have always followed consumers to the platforms they spend the most time on. As users flock to mobile, where exactly will ad spend fall? Signs point to native apps rather than mobile web. But not all apps are created equal, and questions remain about which ones are poised to harvest the estimated $28 billion that will be spent on mobile ads in 2015.

According to Comscore’s U.S. Mobile App Report, users now spend more time on native mobile apps than the entire web, mobile, and desktop web combined. Ad spend is following suit; eMarketer projects that mobile will absorb about half of digital ad spend in 2015, and overtake web in 2016. Ad dollars on social networks are slightly ahead of this trend, with mobile platforms having absorbed about 55 percent of social media advertising revenue and will take a projected two-thirds by 2018, creating a $9.1 billion dollar social-mobile market (BusinessInsider).

These ad dollars will undoubtedly flow to Facebook and Google, which, according to eMarketer, currently account for over two-thirds of mobile ad spend (with Google at about 50 percent of the total) and are still growing. However, people actually spend much more time on non-Google and non-Facebook properties, so advertising spend is currently proportionally low on these platforms. 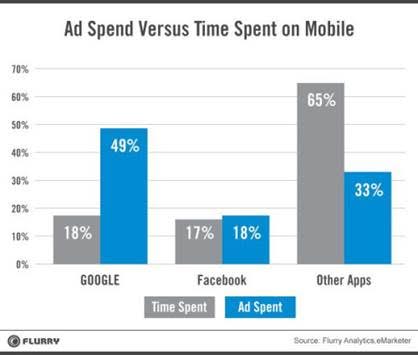 We see an opportunity for ad spend and monetization to shift to apps that users spend more time on, particularly messaging and gaming, which together consume 41.5 percent of a user’s attention on mobile compared to the 35 percent of time spent on Google and Facebook (Flurry). Ideally, a marketer could create an official app for their brand to engage the attention of its fans (instead of on Facebook or other leased social networks) and attract a proportional amount of ad spend to monetize the app.

Brands looking to advertise on mobile, as well as app developers who want to host ads and monetize their apps, should know about two key ways that native apps enable high-return advertising.

First, native apps give users a smooth experience, great functionality, and integration with device hardware like the camera, GPS location, and more. Apps get unique retention tools as well, getting a permanent home on the user’s phone and access to the all-important push notification. Over the past four years, we’ve seen big players switch from mobile HTML5 to native apps for this reason. Facebook and LinkedIn cited better app performance and speed, while Twitter explained that “Our most engaged users are generally those who access Twitter via our mobile applications … we plan to continue to develop and improve our mobile applications to further drive user adoption.“

Second, native supports rich ads. Banners on mobile sites were previously the reigning form factor, but those days are over. Rich native platforms let publishers break out of the rigid ad unit and create content-based advertising that is more user-friendly and integrated with its context. Facebook recently announced that native ads served on its mobile ad network, Audience Network, get seven times higher CPMs than standard banner ads. As an industry, we’re still watching for new experiences to emerge and waiting to see which ones will be most effective. Video is the new golden child of advertising, highly effective in part because the ad is the experience itself.  Social platforms have led the way by embedding ads directly into content, leading to higher engagement with the paid content.

Not all native mobile apps have users repeatedly returning to their app for conversation, sharing, or human connection in the same way that social platforms do. If they lack this rich contextual foundation, they may struggle to support engaging content-based ads. Developers who are in this boat but want to participate in the mobile advertising boom of the next few years should consider adding mobile messaging features to their apps.

Mobile messaging boasts even higher engagement and retention than other native apps. According to Flurry, chat apps have almost five times the daily session frequency compared to the average of all other apps. Similarly, one-year retention rates for messaging apps are in the 60 percent range, while other apps on average have just an 11 percent retention rate. 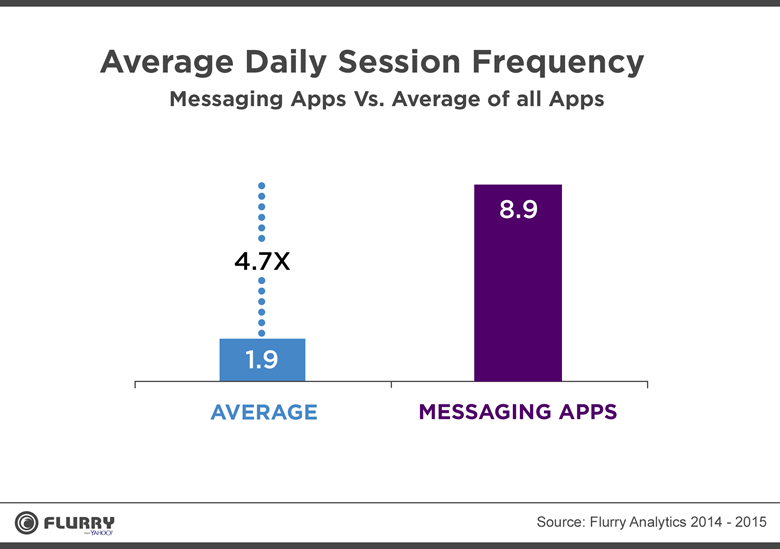 Because users are highly engaged in the context of chat and talking about what they care about most, there are opportunities for unique approaches to advertising (in addition to a wide range of multimedia ad support).Take Inmoji, for example. They make clickable emojis that users can send each to other, like a coffee cup icon that leads to a free cup of Starbucks coffee when clicked. Messaging monetizes extremely well, as we’ve seen with Asian companies like Line that make revenue from stickers, digital goods, and ecommerce with third parties, like booking a taxi right in the chat app itself.

To get the biggest slice of the mobile ad spend pie, the average native mobile app needs to become an effective content-based ad platform. By adding an element like mobile messaging to their technology, they can raise their user engagement and host rich ads all at once.

Steve Chung is the Founder and Chief Executive Officer of Frankly Inc. (TSXV: TLK). After holding an analyst role at Goldman Sachs in NY, he has held senior leadership roles in the technology sector, including Chief Strategy Officer of CDNetworks (sold to KDDI), Executive Vice President of KIT Digital, Inc., Investment Director of BlueRun Ventures and Chief Operating Officer of We Heart It. His experience with both startup and large enterprises has led to his expertise in helping companies grow globally. He has a passion for connecting U.S. and Asian markets through mobile, media, and Internet technology. Mr. Chung holds an AB from Harvard University and an MBA from Stanford University.