Those terms have been trademarked by Miami-based AdMobilize, which expands its presence today in the emerging market of “Google Analytics for the real world.”

The company is releasing version 2.0 of its AdBeacon device and accompanying software, following an initial pilot phase of the first version at 30 companies in nine countries. It is also announcing today it has raised a new $1.6 million in funding.

While the smartphone-sized device has an iBeacon inside it, that’s not all. It also has GPS, a 5-megapixel camera, a Linux computer board, and what CEO and founder Rodolfo Saccoman described to me as “advanced facial detection.”

Despite the name, the AdBeacon platform does not operate as a beacon, but as a detector of real-world customers.

You mount it on a counter, a wall, or on top of a digital billboard, plug it into a power outlet, and set it up for Wi-Fi access.

Through a dashboard available on a desktop computer, a store manager or marketer can then analyze human visitors in ways comparable to how web analytics track site visitors.

The reasons are similar: Find out why visitors/customers do what they do, who they are, and what they may prefer. In the real world, that translates into finding out such things as why one side of a store aisle gets more customers than another, or how many people have actually seen that ad on a digital billboard. 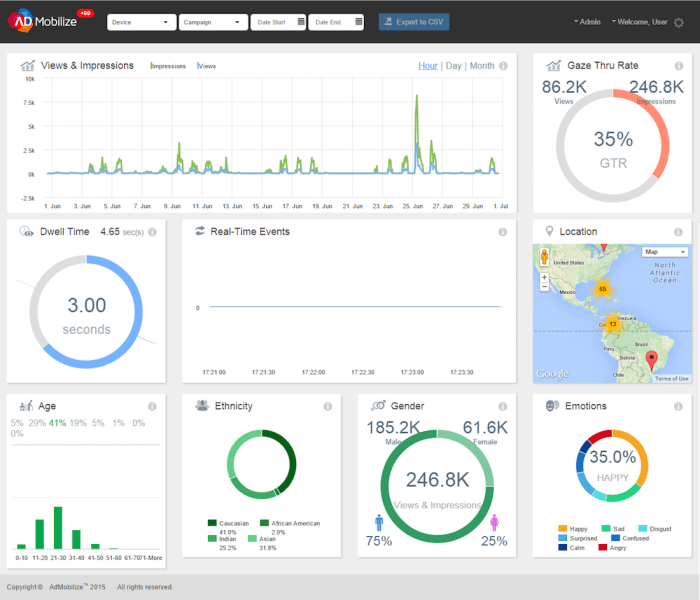 AdBeacon can detect a customer’s “dwell time” in looking at any image, Saccoman said. The camera plus facial detection determines which way a person is looking, and for how long, not unlike dwell time or time on page for websites.

The object of the gaze could be a paper poster, which the software can determine by the direction of the gaze. That allows you to know how many people looked at that new “sale” sign, and for how long.

Or it could be a digital display of some kind — a tablet, computer screen, or video billboard. Gaze recognition can similarly be used for digital screens.

AdBeacon could also amplify the analysis of digital imagery if it is integrated with the content management system that made those images — although AdMobilize is still working on establishing compatibility with leading CMSs.

Want to know when your store gets the most customers? AdBeacon can automatically determine periods of peak traffic, since it counts the humans within its viewing space.

And, to warm the hearts of demographers everywhere, AdBeacon is designed to track the age of customers, their gender, their emotion, and even their ethnicity.

Age assessment is accomplished via 80 nodal points detected on a face. Saccoman claims the system can determine gender and age with about 90 percent accuracy, although age was plus or minus five years.

Emotion-wise, it is designed to detect happy, surprised, or frustrated faces. Ethnicity, he acknowledged, “is very tricky [and] we don’t use it much” because of the difficulty in detecting White, African American, Asian, and Indian (from India) human genres.

The target market includes mom-and-pop stores, large retailers, airports, and digital billboards. The company said it has just recently concluded a deal with Verizon, which will offer its AdBeacon platform as part of its small business connectivity program.

Pricing starts at $100/month for one device and supporting software, with rates decreasing for large volumes.

The real world is arguably the most interesting frontier for digital marketers these days. Saccoman points to RetailNext as a platform that uses “a lot of Wi-Fi to obtain data” about stores’ customers, while AdBeacon is using algorithms and a camera.

He noted that the London-based Quividi “has been doing a good job,” but they employ a variety of equipment, whereas AdBeacon is one small unit.

Also in London is Apical, maker of the Spirit facial detection platform. It is similarly intended to detect faces and their meaning, although the intention is to license that platform to other companies.

And then there’s Pecabu, which is also counting walkers-by through its camera and software. But its complexity is more extended, drawing on demographics and other data from surrounding neighborhoods and tracking an app that is used voluntarily.

AdBeacon, Saccoman pointed out, is a “plug and measure device” that can be set up in a few minutes.

Since its founding in 2012, the company has raised a total of $4.5 million. The new funding, which will be spent on sales and product development, was provided by Azoic Ventures, Rokk3r, and various angels.