Adtech took a very public beating in 2015 – falling stock prices throughout the year and an IPO market that has effectively been shut since mid-2014 have led to speculation about the state of the whole sector. However, research by my firm shows that, while the number of M&A deals was down in 2015, the decline was relatively modest at eight percent. There were still over 400 completed deals in the adtech and martech sector last year, and multiples remained healthy.

So what’s behind these mixed signals?

There was a flurry of adtech IPOs in 2013 and early 2014, as private companies took advantage of investor appetite for the fast-growing adtech sector. With hindsight, many of the companies that went public did so too early. The market for their solutions was still nascent, and they were unable to meet investor expectations for revenue growth. Furthermore, those investors were relatively uneducated about the market and clearly held a number of misconceptions.

This situation was exacerbated by the way some of the companies were positioned as they went public. While they were represented as being Software-as-a-Service (SaaS) businesses, their revenue models were actually transactional and tied to media spend. This doesn’t have the stickiness and revenue visibility of SaaS. A re-rating of the sector was inevitable as companies missed growth targets and investors became better versed in how the market actually operates.

The performance of a dozen or so listed companies does not, however, reflect the overall health of the sector.  The private company market is buoyant, deal activity is high, valuations are healthy, and innovation is rife.

That said, let’s start with the bad news: Undoubtedly the shake-out of the public adtech market has, to a certain extent, filtered down to the private one. Raising venture capital has become harder — many VCs consider themselves overexposed to adtech and are more highly attuned to innovation and differentiation than 12-24 months ago. Businesses that don’t have proprietary technology and a differentiated offering have had to realign their valuation expectations.

However, at the same time that public market investors have been losing their appetite for the sector, interest from strategics has been growing, and this isn’t restricted to outright acquisition. Sky’s recent $10 million investment in DataXu is a good example of this – a new entrant into the sector providing growth funding, which might otherwise have been provided by the public markets or late stage VCs.  Similarly, the venture capital arms of Google, Salesforce, Unilever, and Hearst Media have all been actively investing in the sector throughout 2015. Simply put, growth capital is coming from a wider range of sources. 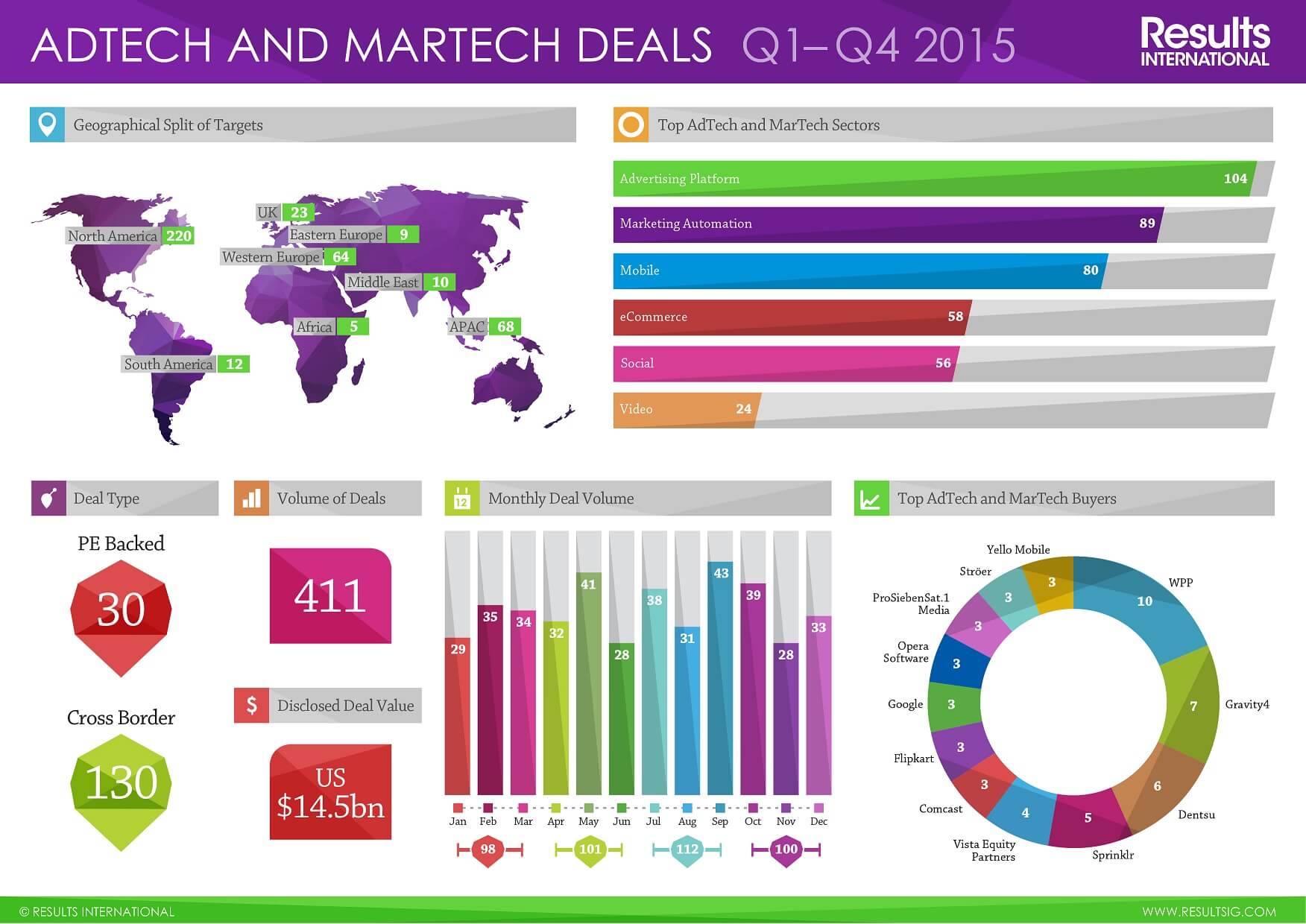 One of the unique features of the adtech market is the sheer number of companies for whom advertising technology is strategically relevant.  Not many businesses across the breadth of the (cash rich) technology, media, and telecom universe can ignore the disruption that’s occurring in advertising and marketing. For some, such as the enterprise software vendors, it presents an opportunity to integrate additional revenue streams. Conversely for traditional media players, notably publishers and broadcasters, it offers a defensive mechanism to protect those revenues. Other interested parties include telcos, traditional data groups, social networks, and other diversified Internet groups, and consultants, not to mention the pure-play adtech and martech consolidators themselves. An increasingly competitive market coupled with a frenetic rate of innovation suggests adtech M&A will remain buoyant.

The other critical factor in the ongoing strategic interest in this sector is the shift in momentum from adtech to martech. The public markets now make a clear distinction between each segment.  While definitions vary, the market generally thinks of adtech as technology designed to streamline the buying and selling of digital ad inventory, where the revenue model is tied to media spend or other performance-based metrics. By contrast, martech is software sold on a subscription basis to facilitate and optimise the broader marketing function. For investors, the subscription-based revenue model is generally most attractive because it provides greater revenue visibility and (potentially) stickiness. In reality the picture is more blurred, but this shift has also become apparent in the private market, and many of the very high multiple deals in 2015 were in the martech segment.

I can’t overstate adtech’s importance, though — media spend represents over half of most marketing budgets, and global ad spend is $570 billion per year.

In reality the sectors are (slowly) converging, and the end game will surely see vendors providing integrated marketing and advertising platforms to brands. This convergence will take longer than some commentators are currently predicting, but it will underpin continued M&A activity in the sector.

Without doubt, the adtech sector faces challenges — continued consolidation behind the “walled gardens” of the digital giants, such as Amazon and Facebook, the impact of ad blocking, ongoing data privacy concerns – but the opportunities are as great as the challenges. As in every tech sector, startups and growth companies will drive innovation, and the large strategic acquirers will continue to bring that innovation in-house through M&A throughout 2016.

Julie Langley is a Partner at M&A and fundraising advisory firm Results International. She has over 15 years experience advising technology and digital media companies on corporate transactions, including company sales, acquisitions, financings, MBOs, and joint-ventures. She has completed transactions with companies including Oracle, Microsoft, Experian, Moody’s, IAC, BT, Axel Springer, CNET, and DMGT.