San Diego, California-based Adtile specializes in creating mobile advertisements it calls Motion Ads that shake when you do, draw in space as your arm does, or tilts when your phone tilts.

Today, the company is launching an online Motion Store so any user can create their own.

You select a pre-coded Motion Ad template from over 20; add assets like photos, video, or text; and select such editable elements as links or transitions between screens. The company says more than 200 different user experiences are currently available, with another 20 to 30 added every month.

To test, the user scans an on-screen QR code from the store with a phone or tablet, and immediately sees the working ad on that device.

When finished, the responsively designed, HTML5 ad is generated for mobile web or apps on iOS and Android devices. A resulting JavaScript tag can be deployed to any ad platform.

When requested by an app or web page, the JavaScript calls up the completed Motion Ad from Adtile’s servers. Ads can be tweaked at any time, even after a campaign has launched, and built-in analytics are viewable through an account dashboard.

No coding is needed to create the ads, CEO and founder Nils Forsblom told me, and no code is shown.

The ads are generally shown in interstitial, full-screen format. A user can be asked to shake a phone to mix an onscreen milkshake, or trace a heart in the air with the phone in your hand to draw a heart on the phone’s screen.

The ads typically use a phone’s gyroscope, accelerator, motion co-processor, and/or compass. Forsblom said that smartphones often have as many as 14 sensors, if you count things like the flashlight and the camera.

The ads get engagement rates as high as 30 percent, he told me, compared to normal rates for that kind of ad format of about 7 or 8 percent.

Although Adtile sees HTML5 ad builders as its only competitor in this space, Forsblom contended that the Motion Store is “completely different.” HTML5 ad builders, he said, are relatively simple editing tools that are not designed to handle interactivity through sensors.

That kind of functionality is “added through gizmos” on top of the editor, he said, and it’s difficult to make the interaction work properly — especially since hardware performance can vary across devices. 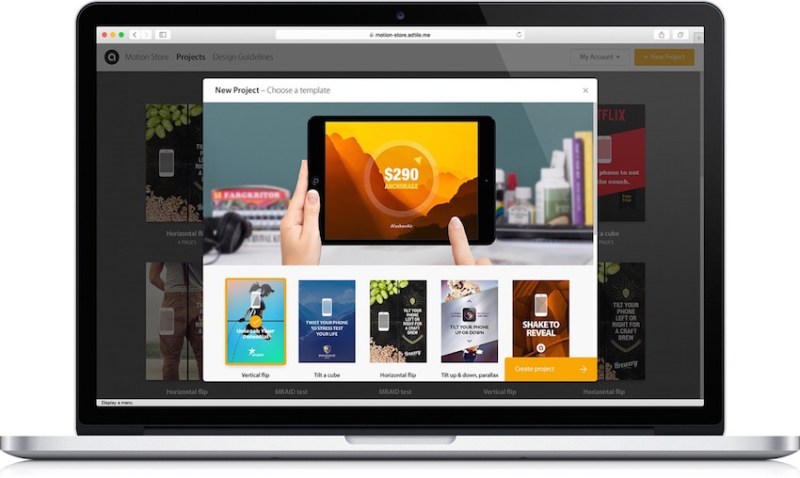 Above: A screen in the Adtile Motion Store.

Adtile’s Motion Ads are designed for Android 4.1 and higher and for Apple’s iOS, and its lightweight, 15-kilobyte sensory framework is intended to help smooth out some of the performance issues.

Instead of the hours it would take to create such an interactive ad from scratch or by using an HTML5 tool, he said, the Store is optimized and hard-coded to create this kind of ad in minutes.

The Store, a key step in the company’s plan to scale up from custom-built ads, is launched with invite-only clients to test usage. Forsblom said open availability will be offered before the end of the year.

Pricing is CPM-based (cost per thousands of impressions) or, in some cases, employs a revenue-sharing model. The company says it expects to publish this fall a library of design and experience guidelines, as well as a software development kit for expanding capabilities.