Updated 9:35 a.m. to reflect that download numbers are daily averages, not a monthly total.

People downloaded the top 200 free apps for iOS 60 percent more often this January than last. That’s the most downloads ever, according to Fiksu Indexes, which track traffic and marketing costs for free mobile apps. December was the previous high point, with 9.2 million downloads per day. Last year saw only 6.4 million downloads a day in January.

“There are more devices out there, and there are more people out there, but at the same time, I think people are more comfortable with putting apps in [their devices],” said Tom Cummings, client account director for U.S. apps at Fiksu. “I think it’s all of the above.”

Part of the driving factor may be the quality of the apps themselves, he said. Even two years ago, the level of apps in the top 200 was inconsistent, he said, including “games that have no point, ones that aren’t making money, and brands tossing stuff out there.

“Now, if you’re going to have a consistent app at the top of your categories, then your app is either really good, or you’re really committed to marketing to make sure that’s happening.”

The top apps are almost all from top brand names now, putting out what Cummings calls “high-quality downloadables” for people to put on their new devices. In many cases, they are companies that people are used to working with across a variety of platforms: He cited Facebook, YouTube, Pandora, Snapchat, Twitter, Spotify, Netflix.

“You could make an argument that you should have every one of those on your phone,” Cummings said, when we asked him to define “high quality.” “All the utility apps are going to make your life easier. All the shopping apps are going to have good deals. All the games in there are going to be fun to play.

“These are no longer niche apps. These are parts of people’s lives.” 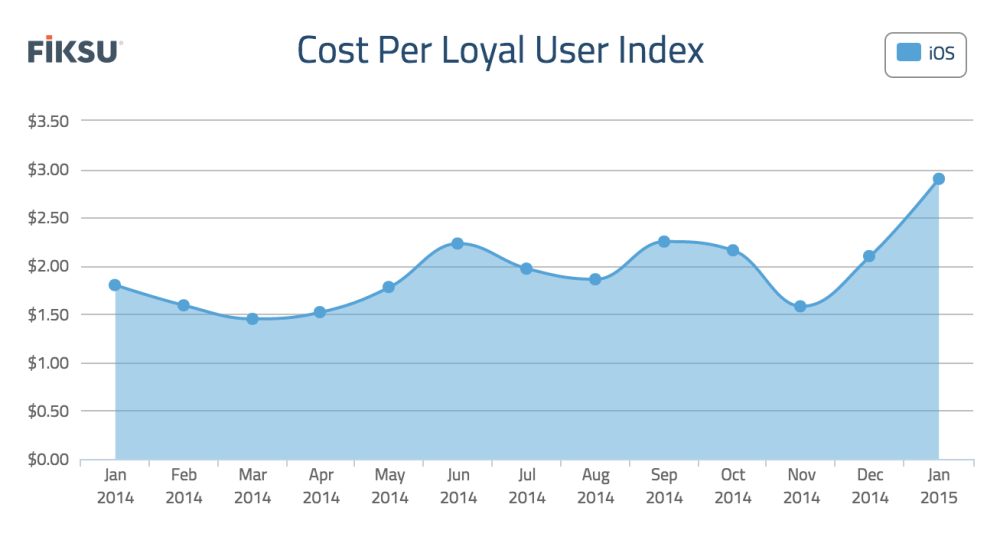 Above: Fiksu’s Cost Per Loyal User Index shows the cost of just the marketing brands do to entice users who open the app at least three times. It’s also on the rise.

At the same time that the number of downloads is spiraling upward, so is the cost of attracting what Fiksu defines as “loyal” users: Those who return to an app at least three times.

The cost per loyal user rose to an all-time high of $2.90, nearly 40 percent more than December, the next highest month.

“It’s getting more expensive to find good users,” Cummings said, adding that in part that’s because “people are getting better and better at [getting them].”

Need a user acquisition strategy?
Learn how the most successful apps acquire and retain users.

As brands get better at targeting their marketing, reaching out to only those folks who have a really good chance of being loyal users, the price to reach those customers drives upward. Cummings still considers that price, or anything below $5 a customer, to be a value, he said.

“I think we’re seeing the long-term maturation, a consolidation of that long tail,” he said. “There could be a thousand apps, but we’re just looking at how many are downloading in the top 200. We’re seeing the quality going up. The costs might be going up, but the value is still there.”

“In looking at strategies to keep acquisitions costs low, it is important for app developers is to remain relatively focused,” Stewart Rogers, analyst at VB Insight, said. “In John Koetsier’s recent Mobile User Acquisition report, it is clear that developers are favoring cross-promotion in their own apps, but developers with too many apps are failing to attract enough users, likely due to stretched resources and a higher quantity of lower quality products.” 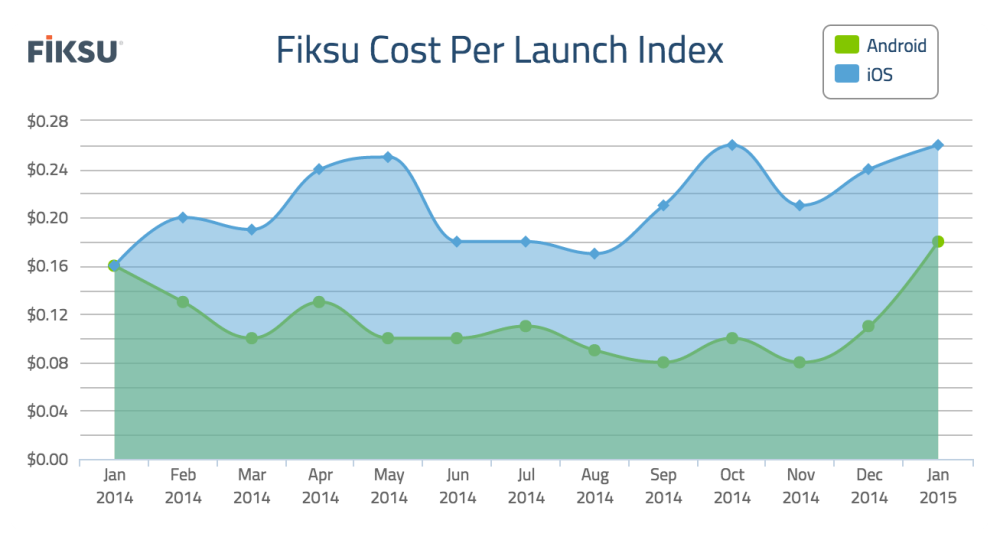 Fiksu’s Cost Per Launch index measures how much app publishers pay in advertising for each time a user launches an app over time. The more launches, the more the price decreases.

The company’s two other indexes, the Cost Per Install and Cost Per Launch, include data for Android apps. They measure the advertising/marketing cost to attract each user to install, and then the cost divided by the number of times users open the app, respectively.

Marketing costs for the top 200 iOS apps, divided by how many times users actually open the programs, have grown noticeably higher than their Android counterparts. They were equal just a year ago.

Some of that uptick is likely due to the launch of the iPhone 6 and app makers jockeying for consumer attention at that time, previous Fiksu analysis suggested.

The advertising cost per install tracks much more closely together, with Android edging slightly higher in December and January.

In December numbers, Fiksu saw lower per-user marketing spending on games as compared to other apps. They decreased 15 percent on iOS and 6 percent on Android compared to the previous year.

Non-game app spending rose by 42 percent for iOS and 47 percent for Android in that period, by comparison.

“This may suggest some game publishers opted to limit their investment this year during the holidays,” the company’s December analysis said.

Mobile gaming is a huge industry: Between paid and free-to-play games, it’s expected to surpass console games in revenue this year, according to the market research firm Newzoo. They estimate $30.3 billion in revenue for games in 2015. 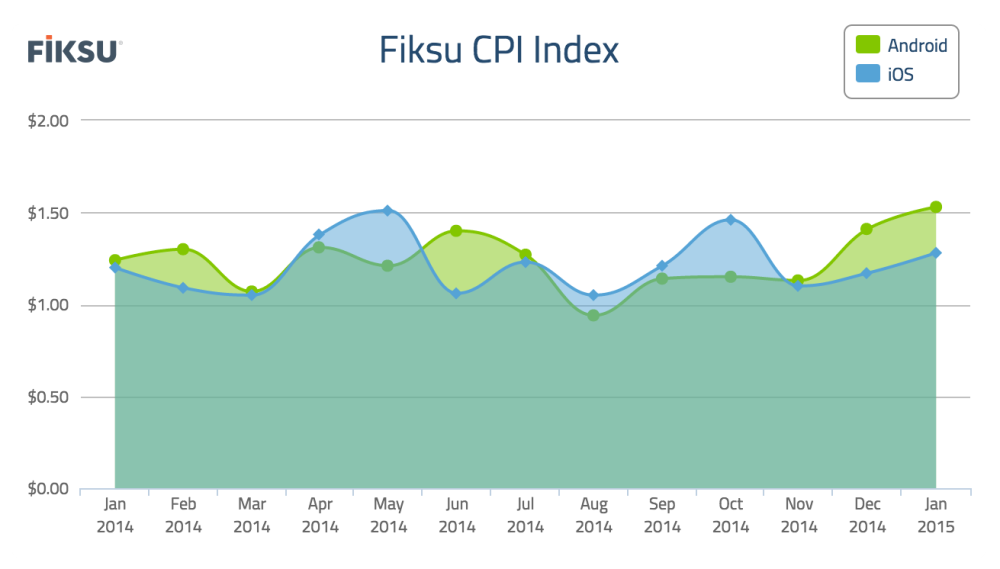 Above: The Fiksu Cost Per Install Index tracks how much publishers of the top 200 free apps pay in advertising per person that installs their software.