Two months ago we surveyed over 2,000 Boston marketers for our CMO-only conference in Boston, looking for the best local chief marketing officer. HubSpot’s Mike Volpe won hands down. 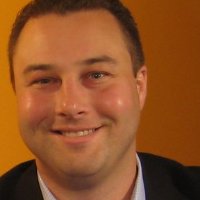 This week, however, he was fired for allegedly having tried to obtain a copy of former employee Dan Lyons’ upcoming tell-all book about his two years with the Boston tech company. Dan Lyons, of course, is a journalist and editor, a writer for HBO’s wickedly funny “Silicon Valley” show, and might be best known for his Fake Steve Jobs blog.

It’s a book that Lyons has described as “scathing,” and that the publisher’s pre-launch website says includes all kinds of juvenile brogrammer-style improprieties which would be embarrassing for HubSpot:

Perhaps even worse, the book accuses HubSpot — a top-ranked marketing automation player and one of the biggest promoter of content marketing — of making “the world a better place … by selling email spam.”

Dan Lyons, on the other hand, must be thrilled.

He isn’t saying much — a man who usually posts to his Facebook page and tweets multiple times daily hasn’t published anything on social media for days. But who could ask for better publicity for his upcoming book? You can imagine the publisher playing with marketing taglines: “The book so explosive HubSpot tried to steal it.” 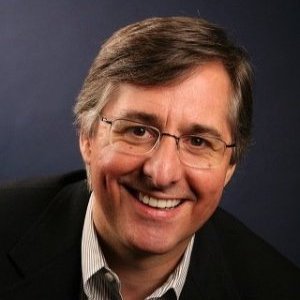 The reality is, however, with neither Lyons, nor Mike Volpe, nor Joe Chernov, HubSpot’s head of content who resigned at almost the same time, supposedly to avoid a similar firing fate, talking, it’s hard to know exactly what did happen. Volpe’s not tweeting, and personal attempts to contact him failed. Chernov hasn’t tweeted since 2013 — interesting for a content marketer — so he’s silent as well.

HubSpot is not just a pillar of the Boston tech community, but also a very significant player in the marketing automation space. In our recent marketing clouds report, the company has stepped up and begun playing not just the with marketing departments of small companies, but also some serious, large enterprises. It received one of the top scores, surprising us, and likely a number of competitors.

And the company recently held a very successful initial public offering, raising $125 million dollars and leaving it with a market value of almost $900 million. The stock has done well, and the company currently has a valuation of about $1.7 billion.

The company’s CEO has been dragged in as well, with the board saying he knew what was happening and did not intervene quickly enough, in a HubSpot press release:

… Brian Halligan, HubSpot’s Chairman and Chief Executive Officer, was recently made aware of Mr. Volpe’s and Mr. Chernov’s actions and did not report their actions in a timely manner. The Board determined that Mr. Halligan was not involved in the underlying conduct and that his lack of timely reporting did not impede the review. Mr. Halligan fully cooperated with the Company’s review and has been appropriately sanctioned by the Board.

Halligan may have been “appropriate sanctioned,” but HubSpot founder and current CTO Dharmesh Shah still appears to support Mike Volpe, tweeting yesterday that he has “great love and respect” for him.

We’ve had Volpe at VB events before, and I’ve met him personally. I have to say that Shah’s assessment rings true. Of course, we do not yet know all the details — and never may.

The deeper question here, given that the company says the matter has been referred to “the appropriate legal authorities,” is whether any criminal proceedings will emerge. And, given that the current CEO and founder/CTO clearly have made some effort to support their former CMO in ways that the board, perhaps, would not appreciate, whether this will have deeper implications for HubSpot’s brand and its ability to execute in the fast-paced martech ecosystem.

Or, of course, if when the book is published it will reveal things that will damage the company — and perhaps careers.

Ironically, a Dan Lyons Facebook post from last year refers jokingly to “serious allegations” made against him, Chernov (who briefly managed Lyons) and HubSpot, and references a now-private YouTube video: 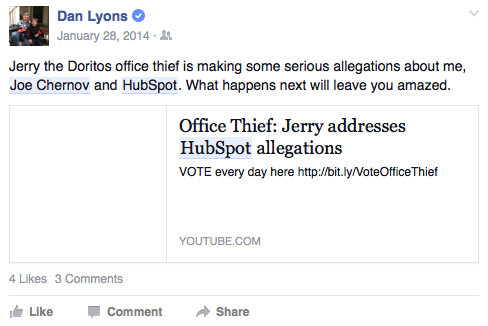 Particularly not HubSpot, which gave me the standard “no comment” in response to a request for more information.