Sales tech is so, so hot right now. In a new analysis by Spoke Intelligence, 317 inside sales startups over the past couple of decades have taken $9.7 billion in funding and turned it into $77 billion in exits, acquisitions, and current value. While ten-figure exits have been relatively rare, the space is heating up. Well over 100 of those startups have cropped up in the past few years. BrightFunnel is an interesting part of the mix, announcing a $6M series A led by Crosslink Capital (which has deep expertise in data analytics) as the company has added new high-profile customers, including Cloudera, Five9, Invoca, and New Relic.

BrightFunnel is after a really compelling problem: What did all of those trade shows, webinars, whitepapers, and emails actually get me in terms of real revenue? Why is marketing sending my sales team crummy leads? And why can’t my sales team attribute accurate value to marketing spend?

As Nadim Hossain, CEO of BrightFunnel puts it, “Marketing is from Mars, sales is from Venus. They’re not speaking the same language. We help provide a common language, by translating every marketing touch into a dollar of revenue (this is called attribution); and using that to predict a future state (forecasting).”

While sales is still a relationship business, the process has changed dramatically. There’s a ton of information out there on the buyer’s journey and its rising complexity. The market is only getting more clouded and crowded in that regard. For B2B deals closed in 2015, it took an average of 17.6 campaign touches from lead to close. This is up 52 percent from 2014, according to BrightFunnel.

One of those major paradigm shifts in sales is the buyer is now in control of the process — this makes marketing and nurturing all the more important, complicated, and hard to track. “Sales people are just as valuable, if not more,” Hossain told me. “They just enter the equation later in the journey.”

​He went on to say that in some cases, sales is easier than before: “Some of the research steps in the buying process become more automated and scalable.” The hard part is teaching sales teams how to look at those steps in the buyer’s journey, and how to serve customers at each step. Hossain said, “This requires new content, new uses of channels, and new ways to measure the results.” 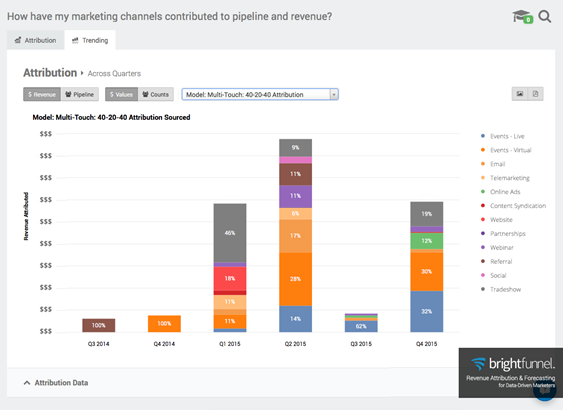 After all, executives care about dollars and cents, not clicks and leads. They also care about accurate forecasts (where will I be, not where have I been). Existing marketing measurement tends to fall short in this regard.

Hossain went on to tell me, “[This is] a CMO and board-level issue. I faced it myself as a VP [of] marketing and I face it now as a CEO. It isn’t enough to answer what campaign sourced a lead. I want to know where to spend my scarce marketing dollars, and hold my team accountable for the metrics that the business cares about — revenue and pipeline — not vanity metrics of leads or MQLs, or worse, opens and impressions. Those metrics have a role as leading indicators for your team, but have no role in an executive setting.”

B2B marketers are just beginning to see the world in a whole new way, and the concept of “multitouch attribution,” BrightFunnel’s sweet spot, is still really new to a lot of firms. As sales and marketing teams push each other to become more sophisticated, BrightFunnel is hoping to catch them right at that inflection point and coach them through the process.

And frankly, the skills in most marketing and sales organizations — the hard data-science skills — aren’t up to snuff to solve this manually with traditional BI, big-data analytics, and visualization tools. “Most marketers aren’t going to spin up a Hadoop instance, hire a data scientist, and put a visualization front end on their own to analyze marketing performance,” Hossain said. “Doing this in a way that allows executive summaries and deep drill-downs for team members is something we’ve solved.”

All of these new sales systems are creating more and more data. People are becoming more and more attuned to being data-driven, and boards want answers. Who will solve that problem? BrightFunnel is certainly off to a great start.