With hundreds of companies in the mobile ad space, real-time exchanges, ad arbitrage, and controversy about ad companies re-selling ad space without telling their partners, the mobile ad space is a tough one to enter for the little guy. There’s just so much to learn, and in spite of the fact that mobile advertising is growing at 110 percent annually, so many ways to screw up.

Decisive, a mobile ad startup in New York, launched out of private beta today to bring a new level of simplicity and transparency to mobile advertising — starting with campaigns as small as $10. 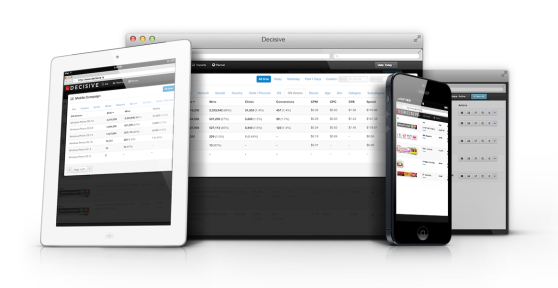 Above: Decisive offers extreme real-time reporting on all ad placements.

“We really believe that if advertising is necessary, it should be helpful,” CEO David Dundas told me via email. “We wanted to start by releasing a product that was fundamentally honest and transparent for our advertisers.”

The commitment from Dundas is that Decisive will tell you exactly, in detail, and in real-time, every single site and app your ads will appear on. That’s a level of detail you won’t get from many mobile ad companies, which deal in the millions of impressions via demand-side platforms that aggregate vast numbers of sites and apps into an audience for your ad.

It’s not an easy jungle to navigate, and as Supercell’s recent spat with Appia revealed, it isn’t simple even for the big boys. Covert re-selling of ad inventory — and even outright click fraud — is not unheard of. Dundas says that one of Decisive’s key differentiators is built-in fraud detection that automatically “detects and blocks all advertiser campaigns against adfraud.”

I knew that things were a little Wild Wild West in the mobile ad space, but hadn’t heard the term “adfraud” as an actual word before. Inventing a new term, however, might make sense as a recent report from the Pew Foundation suggests that fraudulent ads cost the U.S. news industry alone from $6 to $18 billion a year.

“This form of advertising is so new there’s still lot of heavy lifting [to] reach the right consumers,” Dundas says.

The company has a long way to go, of course, to make its vision real. While in closed beta Decisive has run 20,000 campaigns and seen $1 million spent on its platform — tiny numbers in the massive $7.1 billion U.S. mobile ad industry. And it faces literally hundreds of competitors.

But the company’s extreme real-time reporting could help it break through the clutter.

“Our advertisers see every bid, win, click, and dollar of spend down to the second,” Dundas told me. “It updates on-page in real time. It’s like E-Trade for mobile advertising.”