Native ads are, essentially, the offspring of content marketing mating with ads.

CEO Sloan Gaon pointed out to me that at its launch in 2009, his company was one of the first real-time bidding ad platforms. It serves mostly display ads, for both desktop and mobile Web.

But display ads, he acknowledged, are “not really very engaging,” and brands want user engagement.

Hence, the company is adding a content marketing platform, which has been in a beta phase for several months, to its repertoire. It handles brand-generated content, like an article on “Fly Fishing on the Oregon River” from client Columbia Sportswear, which can include text, photos, and video.

PulsePoint staff or the client then add several headline and image variations for the wraparound native ad where the article will reside. These aren’t headlines and images for the article itself, but the ones that users see in the native ad before they enter the content.

The Columbia native ad is then served to publishers’ mobile and desktop websites, to content discovery vehicles like Taboola, and to social networks. 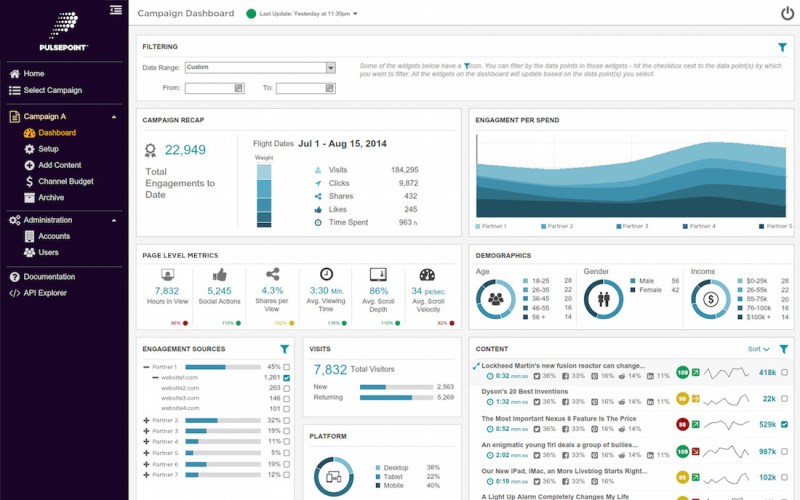 Above: A dashboard screen in PulsePoint’s new content marketing platform

The distribution to native ads on publishers’ sites is handled by the content marketing platform’s older sibling, the programmatic ad platform. This utilizes the recently approved industry-standard format for native ads.

The new content marketing platform handles its own automated distribution via APIs to the native ad formats of social or content discovery networks.

For all three distribution channels — sites, social networks, and content discovery — the content platform automatically monitors the performance of the different headline/image variations, replacing a lower-performing version with a higher one the next time that screen is served.

Performance is measured through such metrics as user time on page, scroll time, clicks, and other factors. This kind of instant feedback and optimization is more common among digital advertisers than content marketers.

“Programmatic is in our blood,” Gaon told me. “Brands have been creating content, but the problem [has been] distribution at scale.”

PulsePoint claims its optimization on sites and apps gets three times as much time-on-page by users than the standard length of time. One of the company’s clients, TaylorMade Golf, said in a statement accompanying the announcement that it has seen a 95 percent increase in video views since it began a campaign with PulsePoint.

There are no stats yet about whether this increased engagement results in any, you know, increased sales.

PulsePoint sees its leveraging of its programmatic ad platform, and its optimization, as a way to differentiate its offering from other content marketing services and platforms out there, like Kapost, Acrolinx, Hubspot, Idio, or inPowered, as well as the content marketing within larger platforms like Marketo.

Currently, the new platform has 32 campaigns for the same number of clients.