Not shockingly, mobile is leading the charge.

Search remains the largest overall category, at $18.4 billion, and display hit $7.9 billion, according to the IAB’s numbers, but those categories are growing much slower than mobile and digital video ads. Search is “only” growing at 8.6 percent, while mobile ad revenue jumped 110 percent to $7.1 billion last year, and digital video ad revenue has tripled over the past few years to $2.8 billion.

Want more? Check out the programming and speakers at VentureBeat’s Mobile Summit, coming next week in San Francisco! 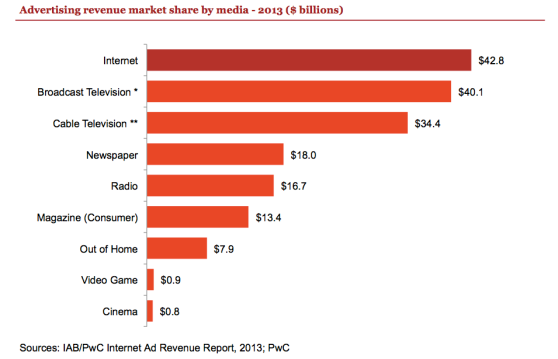 While the digital ad market is expanding, it’s also extraordinarily concentrated — perhaps more so than any advertising market since there were just three TV networks.

Top 10 companies have 71 percent of revenues

The top 10 companies in the mobile and online ad space have almost three quarters of all the ad revenue, the IAB said. That’s actually down just a little from 72 percent in the fourth quarter of 2012 — probably due to upstart mobile companies. But even so, it’s very concentrated in the hands of industry giants such as Google and Facebook.

Unfortunately, the IAB could not break out which companies are in those top 10, since companies report their revenue figures in confidence. 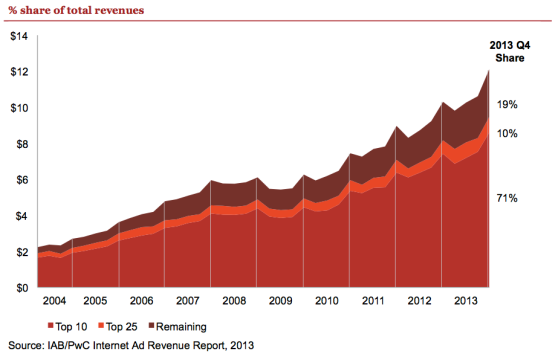 That concentration has remained fairly stable for the past decade, even as the ad world has expanded by a factor of six, fluctuating only between 69 and 74 percent.

Retail is driving the dollar bus

Where’s all the money coming from? Retail is the largest category, at 21 percent, of Internet and mobile ad spend, according to the IAB. That’s up a point from the previous year.

Financial services made up 13 percent of revenues, automotive was 12 percent, and telecom accounted for nine percent of the total digital ad spend. 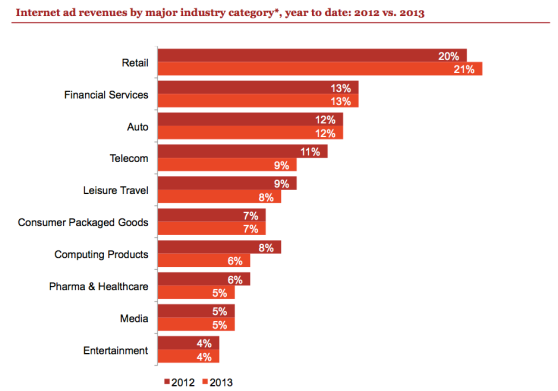 Ad formats are changing from the traditional search and banner of 2005. Not only is mobile growing, but digital video jumped up to the fourth-biggest category of digital ad spend, at $2.8 billion.

That’s less than half of mobile’s $7.1 billion, but it’s more than classifieds, at $2.8 billion, and rich media, and lead generation, and sponsorship. And while display ads grew six percent in 2013, video-based ads are growing faster, according to the IAB.

Performance-based pricing down, but still the majority

Interestingly, CPM pricing is at its highest point since 2010, the IAB said.