Those electronic billboards that adorn highways are dumb displays, and a new startup called Pecabu wants to smarten them up.

“Online ads are murdering DOOH [the digital, out-of-home advertising market],” he added, because of online’s ability to target audiences and then have some idea of what works.

The San Mateo, Calif.-based Pecabu today announced the beta launch of three new products that intend to change how ads in the DOOH market are placed and priced. Also announced: Series A funding of $5.5 million.

“We’re trying to mimic the online model and move it to the outside world,” Smith said.

One of the company’s three new products, called CineGraph, is a smart DOOH advertising platform that places targeted ads on outdoor electronic displays and detects viewers — even if they are whizzing by in their cars.

It matches that real-time assessment of viewers with data about area demographics, weather, geolocated user data, and other information to determine what kind of ad would be most effective on that particular billboard or other outdoor electronic display, such as at a bus stop.

This compares to the current model, where advertisers have only a general sense of what would work on a given billboard.

CineGraph uses a camera mounted on the display to count passersby, which Smith said is done anonymously and on the fly, with no images stored. Currently, about 20 electronic billboards in the U.S. are testing the company’s camera setup. It shoots a picture every five seconds, reports such information as “15 cars and 3 pedestrians,” and doesn’t store the images or use facial recognition.

CineGraph is designed to determine in real time which electronic billboards across the U.S. are most appropriate for a specific kind of ad — not just which geographic areas, but the exact locations of specific billboards. The most appropriate ad is then transmitted to DOOH billboards. Smith said that surveys undertaken by measurement firm Nielsen is the only competing audience analysis for billboards.

A second Pecabu product, called Debo — an acronym of Demographics, Environment, Business, and Operations — is the AI analytics engine that powers CineGraph.

“As you read this,” the company’s announcement said, “Pecabu’s artificial intelligence-powered brain is scanning social media, crime, traffic, and weather databases across every address, zip, and postal code across the U.S. and Canada.” Smith emphasized that only publicly available data is used, and he likened Debo’s speed to that of IBM’s powerhouse, Watson.

The third product, Peca, is a rewards app for Android and iOS smartphones that incentivizes users to anonymously share their smartphone’s geolocation data — which is used to feed Debo and, thus, CineGraph.

A Peca user can collect up to $50 a year in cash or gift certificates. According to a checklist on the Peca Anonymous Rewards website, getting that amount assumes that the user’s device has GPS enabled, a gyroscope, Bluetooth 4.0, and Wi-Fi; that the user employs multiple apps and uses her device heavily; and that the smartphone is a recent model.

And the user must complete bonus point surveys. Less than those specs generates less than $50. 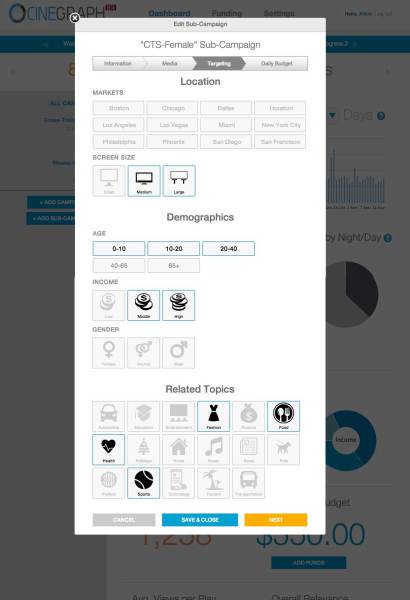 Above: A CineGraph screen for targeting billboard viewers.

Similar to a common method for online ad pricing, Pecabu’s new DOOH billing model will be based on views by passersby, such as $10/thousand views, with the rate determined by the system’s assessment of how many viewers see the ads.

CineGraph will also attempt to assess something heretofore unprecedented for billboards: the rate of sales conversions.

Smith pointed out that the Peca app is central to calculating conversion.

“Let’s imagine a fast food chain has created a DOOH campaign for their restaurant,” he told us. “Any user with Peca installed, [such as] someone driving down a highway while this ad is playing, is recorded in our system.”

Peca is then used to determine “that out of the 10,000 people that viewed this ad, 100 had Peca installed, and 10 of those people visited a branch of the restaurant in question within five days of viewing the ad.” That becomes, he said, a 10 percent conversion rate.

Smith pointed to other applications for Pecabu’s system, such as helping to power smart cities. He told us that the new funding round, whose investors are currently unidentified, will be used for product development, sales, and distribution. The company had earlier raised a $1.4 million seed round.

Debo is in beta now. CineGraph will launch at the South by Southwest Festival in Austin in March, and Peca at the Consumer Electronics Show in January.