Email service providers are a business unto themselves. But maybe not for long. 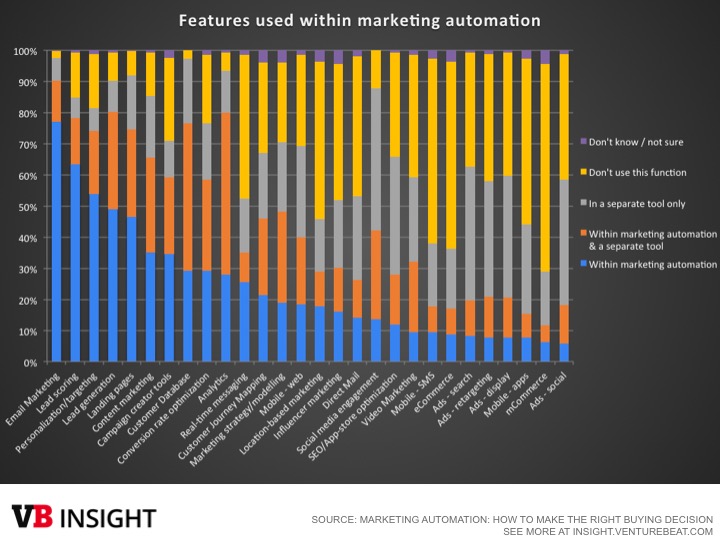 Above: Email is leading use case for marketing automation

As a result, most ESPs have been adding automation and cross-channel features of their own to better compete, as we found in our report on the email marketing landscape. Many vendors are adding triggered messaging, mobile push notifications, SMS, lead scoring, and more, blurring the line between ESPs and marketing automation.

In 2013 StrongMail changed their name to StrongView to reflect an offering that now extends beyond email. The year before, ESP ExactTarget bought MAP Pardot for $95.5 million (then Salesforce acquired ExactTarget in 2013). Netsuite recently paid $200 million for Bronto Software, an ESP that was already beginning to refer to itself as marketing automation.

The lines are blurring.

In the world of marketing, there’s a trend to all-in-one, cloud-based, journey building/mapping/solving platforms. Sending dynamic, personalized, triggered content previously required a marketing automation platform. Similarly, there was a whole category of cart-abandonment vendors just a year ago. Today, though, these technologies are available in full-featured ESPs, often at low price-points.

Kraig Swensrud, CMO of ESP Campaign Monitor, says there’s a place for a spectrum of offerings:

Over the past 10 years, a lot of the vendors that have started as ESPs have morphed into marketing automation cloud suites. In my previous role as CMO at Salesforce, it cost me $1M and took a year to implement a ‘marketing cloud.’ It’s awesome for the world’s richest and most sophisticated companies. But there are only 500 companies in the Fortune 500. There are millions of other businesses that don’t have $1M and a year to get something done.

ESPs are dominant, incumbent technologies. But marketing automation is making quick progress on the path to disrupt them. The two markets will continue to blur — and many vendors will not survive the shakeout.

For now, email marketers no longer have just one market to look at, but two. With hundreds of options in each, and well over 2,000 marketing tech options overall, that’s a lot to take in.