Facebook took steps today to make conversations between customers and brands a bigger part of its business strategy, announcing that advertisers can now choose “messages” as an objective in Ads Manager.

When starting an advertising campaign on Facebook, one of the first decisions you make is your objective, or what you’d like users to do when they see your ad.

Previously, traffic and conversion objectives could be selected for “click to Messenger” ads. Now advertisers can also choose the “messages” objective to initiate conversations with customers and do things like answer questions, drive transactions, or generate leads.

The “message” objective begins rolling out today and will be available worldwide in the coming months. 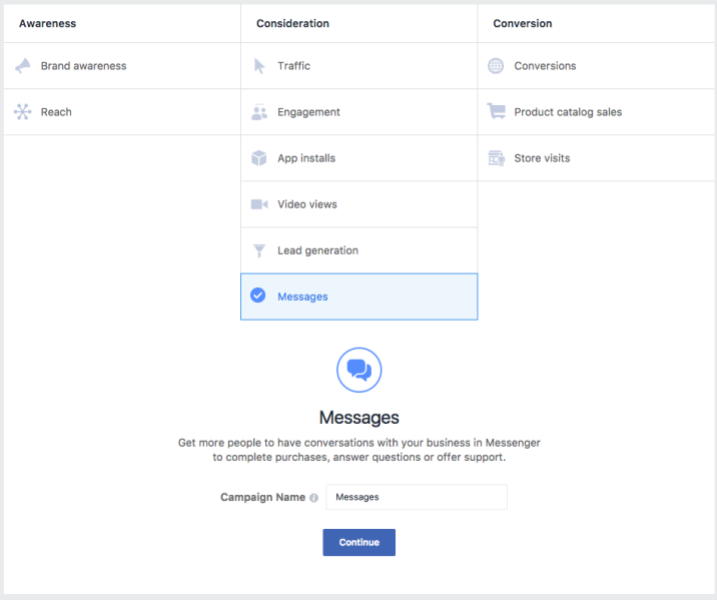 Facebook has continued to step up its attempts to make conversations between businesses and customers part of its messaging monetization strategy.

Conversations between brands and customers have been a focal point for Facebook Messenger since the launch of the Messenger Platform in April 2016 and have remained a focus in recent months as efforts to monetize messaging apps begin in earnest this summer.

In July, an advertising beta for the front page of Facebook Messenger opened up worldwide, while WhatsApp began to verify business user accounts and launched a customer service app for businesses large and small.

The Discover Tab in Messenger was also added earlier this year for featured conversations with people or bots, and has been used by major brands like Mercedes-Benz, McDonald’s, Kayak, and WebMD.