There has been a lot of talk about Facebook and its video capabilities of late. While Facebook is certainly going to be the next big digital video provider, a recent study by John Koetsier found that Google’s YouTube is actually still 11 times bigger than Facebook in terms of video viewing.

But regardless of the volume of videos being watched, it appears — according to a new study conducted by Quintly – that Facebook native videos are performing incredibly well.

What do we mean by ‘incredibly well?’

Quintly, which has an interest in analyzing that data, examined over 1 million video posts published on Facebook (a statistically significant volume). It scraped data from 150,000 Facebook pages in total, 70,000 of which posted a native Facebook video.

Here’s what the report found:

Interaction rates were markedly higher for Facebook videos. In fact, they were almost 4 times higher than for YouTube, which performed slightly better than Vimeo and “other” platforms. Those others included Twitch, Vevo, and Red Bull’s own media player. 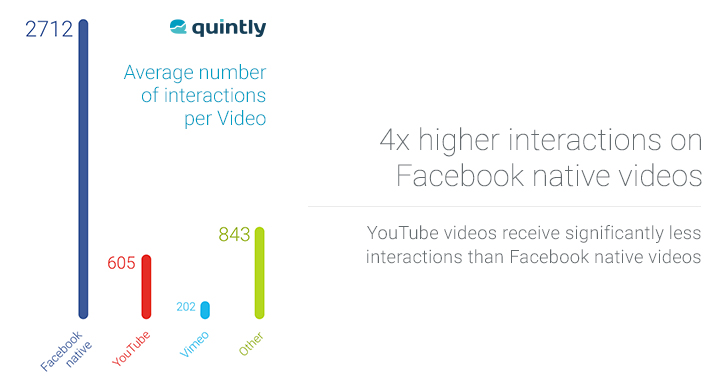 How do those results look in a table, as an interaction percentage?

That’s impressive, but then marketers seem to be incentivized to upload videos straight to Facebook, rather than publishing links to YouTube, Vimeo, Vevo, or other video platforms. In addition, features that are only available for Facebook native videos, such as auto-play, seem to boost the performance of video posts.

In fact, the study shows that Facebook native videos dominate the timeline, with 65 percent share. So, why is that the case? 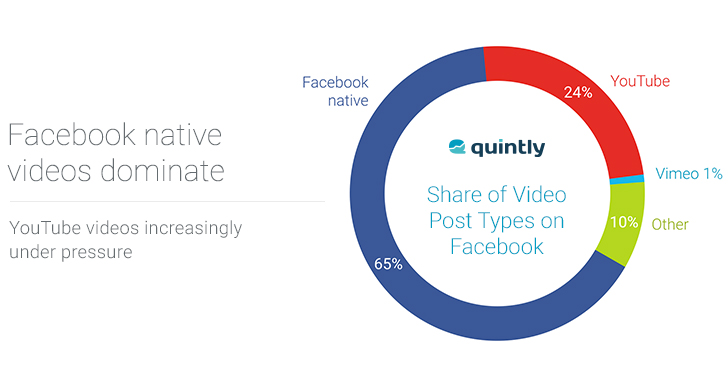 It could be that Facebook’s own EdgeRank algorithm, which determines the posts each user sees in their timeline, is favoring Facebook native videos over video from other providers. It isn’t clear whether that is the case or not, but it certainly is an option, and would help Facebook continue its assault on Google. It could also be that Facebook’s auto-play feature is unnaturally boosting the numbers here, since videos are being fired up as soon as they appear in the timeline.

The study also found that when it comes to sponsored posts, Facebook native videos perform much better than the alternatives, with higher interaction rates for paid campaigns across the board.

That’s not to say that Facebook doesn’t have issues with video that marketers, and video producers, need to be aware of. As John Koetsier pointed out in his study:

According to an Ogilvy report, 725 of the most popular 1,000 videos on Facebook were re-uploads, published by someone other than the original creator. And that Facebook is doing little if anything to protect copyright holders — as opposed to YouTube, which has a Content ID that auto-checks every video against a big database of copyrighted content. That’s critical, because if you’re a major YouTube star with hundreds of millions or billions of view — and millions of dollars in annual earnings — you want to protect that status and revenue.

The underlying message here? When it comes to promoting video content — organically or via paid promotion — it is better for marketers to upload different versions of their content to each platform, and match the form of the video to the way users like to interact with that platform. That is, according to the data, the best of all worlds.