Back-to-school shopping has been in full swing this July and August.

It is estimated that U.S. retail sales will increase 4.6 percent for the two-month period leading up to the new school year, and ecommerce sales will rise by 14.4 percent.

With every major retailer having a significant presence on Twitter, Facebook, and Instagram, you can be sure they have been doing their utmost to leverage those platforms to increase awareness, loyalty, and revenues.

But which retailers are doing it best, and which social media channels are delivering the results retailers need to move the needle in their favor?

Those questions are answered courtesy of new data released by Engagement Labs today. I spoke with them to better understand the results, and discover why Instagram — in particular — is trouncing the more established networks at engagement.

Engagement Labs scored each retailer, and every department store, using its eValue Score to determine the top 10 on each social media network. I asked how the eValue score is determined.

“An eValue score is composed of a series of metrics and key performance indicators (KPIs), including Engagement, Responsiveness and Impact, which is benchmarked against 100,000+ handpicked and verified brands,” Bryan Segal, CEO of Engagement Labs, told me.

So who are the winners and losers, when measured using these metrics and KPIs?

For those of you that don’t consider Amazon a department store, I asked who would take the vacant tenth-place spots if they were removed.

“If Amazon is taken out of the rankings, Bloomingdale’s came out at number ten for Instagram, along with Target for Facebook, and Sears on Twitter,” Segal said.

Rankings are great, but the real surprise is the high engagement levels created via Instagram.

Instagram is unique in that it does not offer the ability for third-party applications to post images. That hasn’t stopped some from trying to create an Instagram scheduling solution, but most of those tools simply tell the user when to post the image, but still require them to post it manually via the app. Others that claim to post directly could be breaking Instagram’s terms of service, or may be logging in on behalf of the user, opening up a security risk.

This means that the only way to post to Instagram for brands, right now, is to do it manually or pay for a sponsored image. Instagram users have come to expect an authentic experience thanks to the lack of marketing automation on the platform, and that could affect engagement in general. But there are other possible explanations for the much-higher engagement rates.

What works in social:
Social media management: Tools, tactics … and how to win
is available now on VB Insight for $299,
or free with your marketing tech subscription

“It could be due to the current popularity of the platform but also due to the format of the channel and simplicity of liking a post,” Segal said. “Also, due to Instagram’s discovery functions, users are easily able to discover brands without necessarily following the page, leading to increased engagement on posts.”

While simplicity, visuality, and discovery may be the main indicators in terms of Instagram’s success in engagement, that success could also be because the platform is newer.

“Brands are newer to Instagram than they are to other social channels, such as Facebook and Twitter,” Segal said. “We see that the conversation is more authentic because brands are interacting with followers from a lifestyle promotion perspective rather than a product promotion perspective. If, for example you looked at Facebook ten years ago, you would have seen a similar trend. However, with the migration to more media spend, we see, and will continue to see, Instagram as a whole changing from being authentic to a more product-focused channel.”

I’m not sure I agree with that prediction. While Instagram continues to disallow posting via its API, it should remain a wholly authentic platform. But if it were ever to open that capability up, or ramp up the number of sponsored images in the average stream, there’s a chance it could head that way. 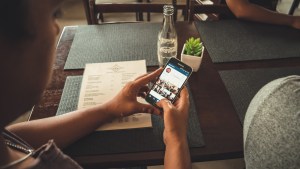 However, despite the high engagement scores, interaction with images remains skin-deep at present.

And why is that?

“This can be due to the simplicity of liking a post (by double tapping) when scrolling through the different feeds,” Segal said.

Simply put, it is easy to like on Instagram, but it takes time to comment. And while it was not seen in Engagement Labs’ data, I can say that — after looking at sample feeds from the retailers listed — many comments are simply users tagging friends so that they also see the post.

Instagram’s success may be due to the platform itself, but also could be down to the way retailers use each social network, as is evident from the way Nordstrom dominates the number one positions on both Twitter and Facebook.

The lesson to be learned? An active response strategy. According to Engagement Labs, the company responds to Facebook posts and comments quickly, with responses that include useful information such as links and photos, as well as detailed replies that tend to generate ongoing conversations. They also take advantage of the live, real-time nature of Twitter to respond to their users’ tweets.

With almost 70 percent of major brands using social networks as “broadcast platforms,” Nordstrom join KLM as an example of why taking social media seriously is not only a good strategy, but one that provides returns.