Once you’ve added your new app to an app store, the trick becomes marketing it and then using that experience to plan your next app.

Today, big data startup Gummicube is emerging from its closed beta period with the launch of its Datacube Platform to provide developers with more app store intelligence. The company is also announcing it has raised $830,000 in seed money.

“We help developers find their audience in the app stores,” CEO and cofounder Dave Bell told VentureBeat. The “app intelligence engine,” he said, does this by “finding where your users are,” what your competitors are doing, how you describe your app, and other factors.

A developer like Tango, Bell told us, will “load their app into our system to find their audience in the app store and then translate that into marketing.”

Loading an app involves entering all relevant URLs and some descriptive data like keywords, and the engine takes it from there. App store metadata, user comments, comments and metadata for the app’s competitors, data from ad networks, and other sources go into the mix.

Through a dashboard, the engine delivers a competitive profile that includes market trends, consumer demand, keyword and phrase suggestions, app store trends, recommendations for future development, and related stats, all of which are continuously updated as more data arrives. 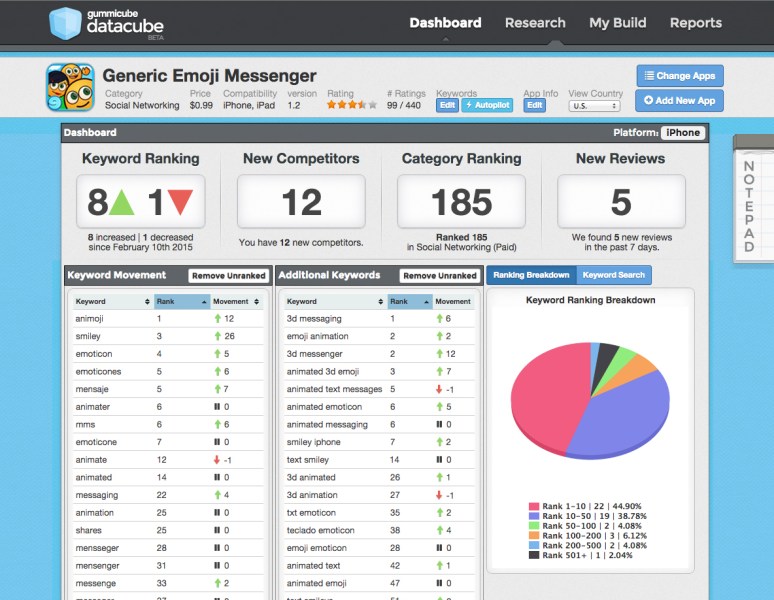 “Competitors are a little bit fragmented,” he said, adding that what Datacube does is more akin to what consumer audience tracker Nielsen provides that what other app store optimizers do.

By contrast, he said, app store optimizers like AppAnnie and Sensor Tower “provide rudimentary tools for keyword optimization,” he said.

A key differentiator, he said, is that instead of adapting web search techniques and algorithms to mobile search, Datacube has been built from the ground up for mobile apps.

“What we’re doing that’s unique — our data entirely comes from mobile users, from breadcrumbs in the app store and user data.” As one example of the need for a mobile approach, he noted that search terms on the Web work differently in an app store because they tend to be more function oriented.

The seed round, from Golden Seeds and F50 Venture Partners, will be spent on “ramping up sales and marketing efforts and international distribution through partnerships,” Bell said.

The company, founded in 2010, had previously bootstrapped its development costs. Datacube is currently targeted at Apple’s App Store and the Google Play store, and the company said the addition of other app stores is planned.