Back in the days of the Cold War, Ronald Reagan said that his attitude towards the Soviet Union was “trust, but verify.”

For years, brands have built up trust — or at least the perception of trust — in the minds of their audiences through advertising, celebrity sponsorships, influencer marketing, and general brand awareness efforts.

The thinking went, “If our customers see us a lot, in familiar places, and we are associated with people they already like, they will trust us, and we will stand to benefit.”

That worked for a long time. Today, however, trust is in a global freefall per the Edelman Trust Barometer, 2017.

[T]rust is in crisis around the world. The general population’s trust in all four key institutions — business, government, NGOs, and media — has declined broadly, a phenomenon not reported since Edelman began tracking trust among this segment in 2012.

As Bernadette Jiwa eloquently wrote, “Trust is also the foundation of every business. A business is not merely an organization that creates value or exchanges goods and services for money. It is the promises we make to our customers in return for their trust. … The first and last goal of every business is to make promises and then to keep them.”

Yet time and time again, basic promises have been broken by the large institutions in our lives. Almost too many to mention, but just a few include the promises of:

Want more? See HuffPo’s “8 Companies That Lied To You.”

You don’t need the Edelman report to tell you that people are tired of feeling deceived by big institutions and they are rebelling (see Brexit and Trump).

Bottom line: They are tired of trusting simply because some big brand or advertising agency tells them that they should.

So what is a brand that lives its values to do?

This is where blockchain technology will play a role.

Chances are you’ve heard of Bitcoin. Less likely, but possible, you’ve heard of blockchain technology, which undergirds Bitcoin, and provides a censorship-proof, distributed, immutable set of software rules that govern the operation of the Bitcoin network.

This technology is great for transferring value (that’s what Bitcoin does) without an intermediary. It’s also open to anyone and can be inspected and verified by anyone. In other words, anyone can see what code is written, how it is to be executed, and the fact that a transaction took place.

At its core, blockchain serves the function of “trusted intermediary” without the overhead, friction, or time associated with an actual company or organization.

The possible implementations and implications of blockchain technology are vast. Hundreds of use cases in multiple industries are emerging, and announcements are made almost daily. For example, the DTCC plans to use blockchain to settle its $11 trillion in derivatives trades; Homeland Security is looking at blockchain to track goods and people across borders; Cisco, Bosch, and BNY are forming an IOT blockchain consortium; and the FDA is looking at blockchain to help with population health management. And that doesn’t even touch on the numerous efforts within the financial services industry.

But there’s another use case, a horizontal one, that should give marketers and brand managers — at least those who are genuinely honest, ethical, and want to do the right thing — a cause for celebration.

Blockchain as guarantor of brand values

Imagine, for example, that you want to be like Nordstrom, with a lenient return policy (at least until they changed it recently), and you set up a brand rule that says “Anytime a customer returns an item, we give them their money back, no questions asked.”

In a blockchain, you can do that, and no one can override it. It doesn’t matter if an employee is having a bad day or doesn’t know the rules.

Alternatively, you could encode, “If a customer has been with us for more than one year, give them a full refund, but less than a year, only 50 percent.”

L.L. Bean has a core values statement that says, “Sell good merchandise at a reasonable profit, treat your customers like human beings, and they will always come back for more.”

Now, what if they hard coded a rule into a corporate governance blockchain that said reasonable profit means something like 15 or 20 percent?

Then, everyone (yes, including their competition) would know the margins. At the same time, customers would always feel like they were being treated fairly. And that “always feel” is the essence of brand. That builds loyalty and repeat purchases.

It’s not about the specific policy or core values example here. It’s about the transparency, the verifiability, and the knowledge a customer has that she is being treated fairly.

By removing human fallibility and the temptation to “bend the rules,” encoding brand values into a blockchain can provide brands with a customer-verifiable way to ensure that experiences are consistent, open, and transparent. A company that is so committed to a certain set of behaviors that it is willing to code them into software immutably will yield a competitive advantage.

I’ll be the first to admit that this change isn’t happening tomorrow or next week. But in an age where the perception of fairness and trust are at a low, blockchain technology represents a new opportunity for companies to demonstrate that they can be trusted. 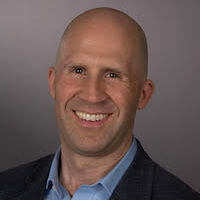 Jeremy Epstein is CEO of Never Stop Marketing and currently works leading startups in the blockchain and decentralization space, including OB1/OpenBazaar, and Storj. He will keynote Microsoft’s Global CXO Summit in March and advises F2000 organizations on the implications of blockchain technology. Previously, he was VP of marketing at Sprinklr from Series A to “unicorn” status ($1.8bn valuation).