This week saw the return of the most-watched ball game in the world. One league in particular is broadcast in 212 territories to an audience of over 4.5 billion people — the Barclays Premier League.

You may call it soccer, but I will always call it football (that other sport is better described as “throwball,” I feel). But whatever you call the beautiful game, it has truly captured the attention of the United States — football became the second most popular sport Stateside last year, according to an ESPN poll.

But what if you re-imagined the first week’s Barclays Premier League table results based on how the teams use short-form video — specifically, Vine? Instead of placing the winners and losers based on whether they scored three points, one point, or a big fat zero, what if we re-ordered the teams based on how many Vine “loops” they received?

That’s the question answered in an infographic created by Burst this week. But why Vine? What is a “loop?” Why has that unit of measurement received negative press since its introduction in 2014? And is that criticism justified?

The first question is answered when you realize how the Premier League has embraced the six-second video format.

For the 2015-16 season, all clubs use Vine videos to promote their team to current and future supporters, and have collectively brought in 474 million loops. Of course, it isn’t all about the supporters. Vine videos help to provide additional value to team sponsors, as is illustrated perfectly by the most popular Vine video: This behind-the-scenes blooper from a recent Audi shoot. 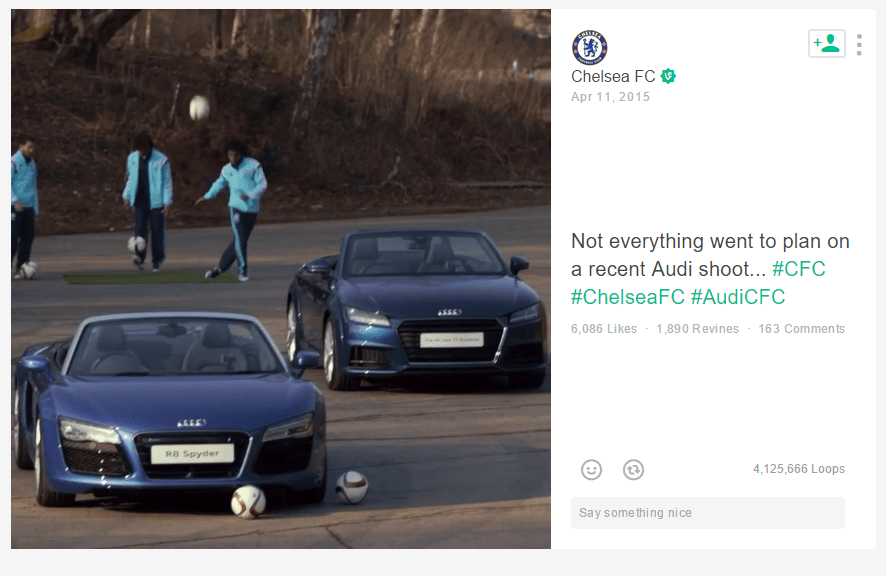 A loop, in Vine terms, is a measurement of how many times the full video has been viewed. If you watch a video four times before moving on with your life, that counts as four loops.

But early on, people noticed that all was not well in Loopville. Some suggested that bots could be responsible for inflating the counter, and others were worried about videos being played in a browser while not actually being watched. I talked with Michael Litman, CEO at Burst, about the claims being leveled at Vine last year, and whether loops are better than the other metrics Vine already provides.

“Before the loop, the conventional ‘revine’ (the equivalent of Twitter’s retweet) was king of the six-second video platform,” Litman said. “This has been overtaken in importance now by the loop.”

But what about those concerns leveled at the loop, such as viewers leaving a loop playing, or teams of viewers on the same network opening a video to unnaturally inflate the loop counter?

“Vine has tried to combat some of the negative press by capping loops per IP address and only counting loops when the tab playing the video in a browser is visible,” Litman said. “However, some of this criticism is missing the point of Vine and its unique key metric. The brand value of loops comes from its effectiveness as a creative bench-marking tool against previous content, competitors and ‘aspirational’ brands.”

Litman is right, of course. What the loop does do — without doubt — is encourage brands to create ever-more engaging short-form videos. While not created by Manchester United itself, this example from Adidas, starring the team’s Juan Mata, has received over 1.3 million loops in its first week. 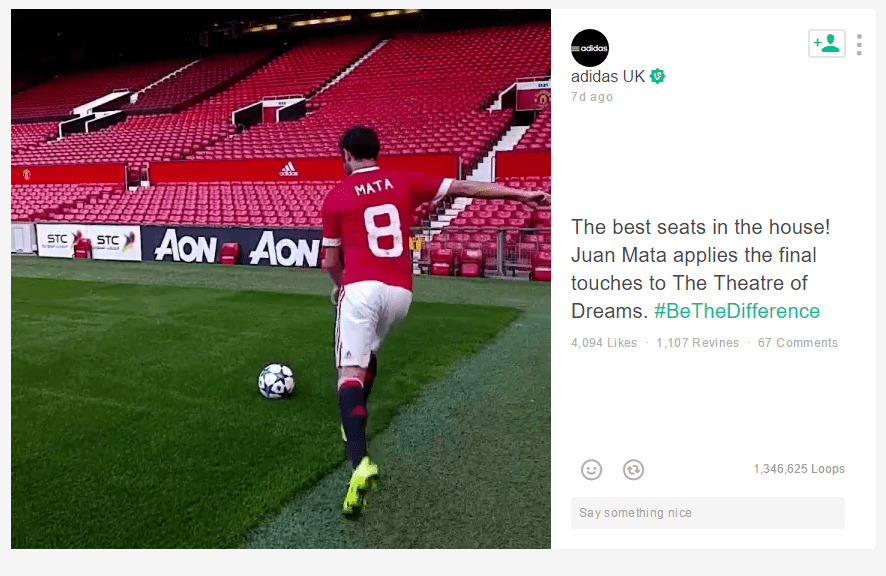 Of course, loops sit on top of Vine’s existing metrics and measurements.

“Vine shares some common metrics with other social channels, such as likes, comments and revines,” Litman said. “We have noticed some interesting patterns across the more than twenty-five sectors we track through our analytics engine. Likes appear to be more frequent in some categories where the average loop count is less than high-performing loop sectors. So while loops are the undisputed key metric on Vine, it’s possible to argue that different sectors could find higher value in the common social metrics that Vine also offers.”

So is there an argument for, or against, loops versus the traditional video analytics, such as those provided by YouTube and Facebook?

“Just as brands should have a dedicated content strategy for different social video channels, analytics should get the same treatment,” Litman said. “They are not universal. It’s human nature to want one answer to seemingly similar questions but the reality is, you can’t compare YouTube to Vine as a creative video medium. By the same token, the insights generated from each platform should, and do, offer different values.”

According to Litman, Vine is starting to catch up — in views, at least.

“Vine is now seeing 1.5 billion daily loops, equating to more than half a trillion loops yearly, and there are five vines tweeted every second. It’s a force to be reckoned with that has almost slipped under the radar.”

Under the radar? Certainly, Vine doesn’t currently appear in VB Insight’s “mobile app engagement index” — Instagram being the highest-placed app for short-form video on both iOS and Android.

In addition, from an advertising perspective, Litman could be right about Vine being “under the radar.” The big money is being spent elsewhere, with Facebook set to surpass YouTube in advertising spend this year, according to a recent study published by Mixpo.

“One of the reasons for this is Vine does not have all the creature comforts of baked-in analytics that other platforms like Facebook and YouTube do, where metrics like cost-per-click and views resonate the strongest because there is a clear return on investment,” Litman said.

Advertising will continue to be a problem for Vine to solve at a later date. With no plans to force-feed adverts to users in the near future, Twitter (who owns Vine) prefers to connect brands with talent, who then use the platform to create branded content. In essence, Vine shares more with an “influencer marketing” approach than it does with digital and mobile advertising.

But as with all marketing strategies, the key is matching the right content to the appropriate platform, and reaching the widest possible audience on the device and channel that they favor. Even that changes throughout the day as consumers or, in this case, football supporters, move from smartphone to laptop to Internet-connected TV.

“The most forward-thinking of the clubs are making use of each of the platforms together to drive traffic combined to different versions of the same content,” Litman said. “We ran an experiment where one of the football clubs created different edits of the same content on both Vine and YouTube. These were posted across their own platforms. In this instance, it was Manchester City F.C., and you may be surprised to find that the Vine video outperformed the longer 44 second full HD YouTube edit with over 10x the views (loops).” 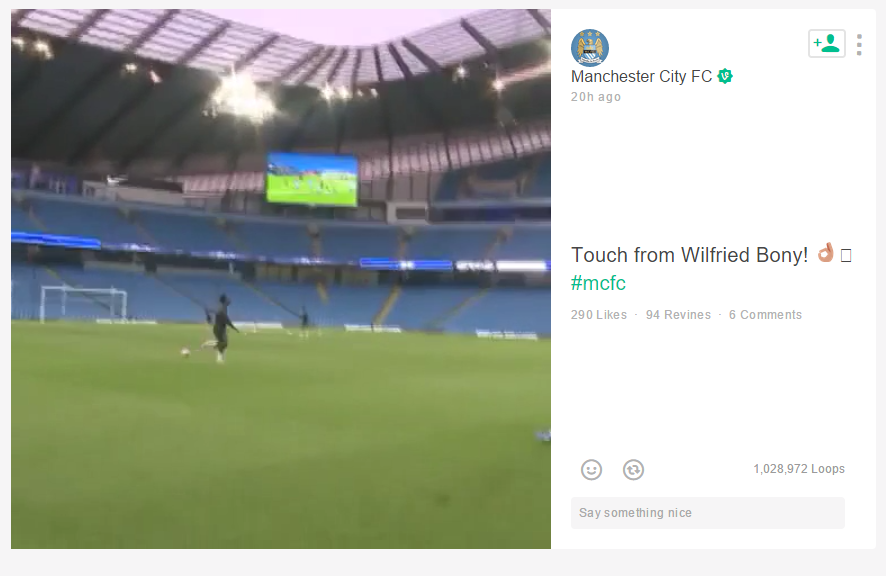 So here’s the first-week Barclays Premier League table, reordered by Vine loops. Whether Vine will continue to catch up to YouTube and Facebook remains be seen. Litman underlines how well it can work for those that leverage the platform effectively, by highlighting statistics from the current ‘Vine League’ leader. 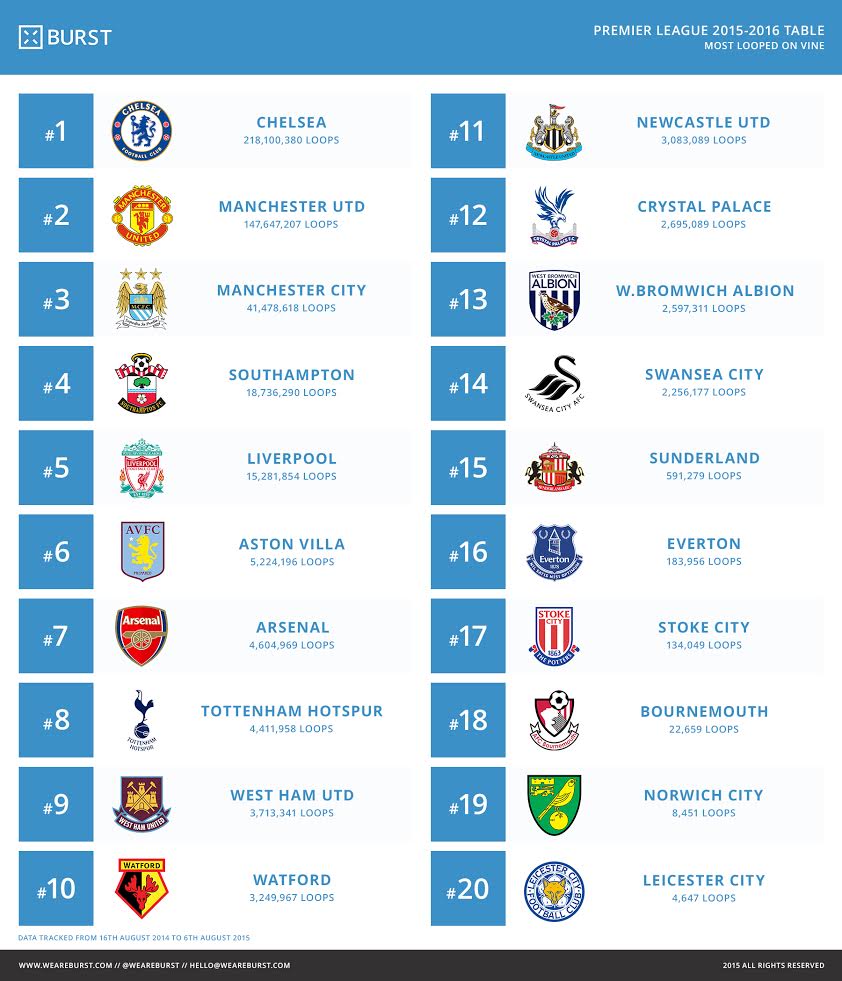