LevelPlay is an in-app bidding solution. It offers developers significant operational, financial, and technological enhancements by automating monetization and making it easier to get last-second ads for mobile apps.

Ad networks supported in the launch include AdColony, Tapjoy, and IronSource, and other networks are in the process of integration and will shortly join the platform. Some of the companies already live with LevelPlay are Amanotes, Playgendary, Random Logic, Ilyon, Rollic and Gismart.

“2019 is the year of in-app bidding, and we’ve seen the industry take great strides in technological readiness and adoption,” said Nimrod Zuta, vice president of product developer solutions at IronSource, in a statement. “We’re excited to be launching our solution at a time when the industry is primed to enjoy the benefits of in-app bidding, and to debut a product which is built from the ground up with the needs of a game developer constantly at the forefront.” 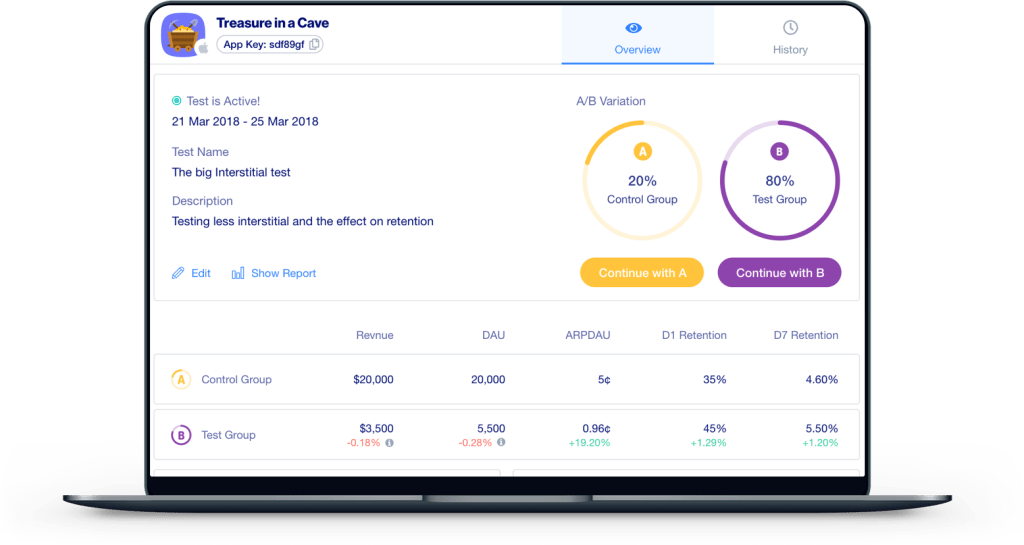 Above: IronSource is providing A/B testing.

In-app bidding is similar to header bidding on the web, but for apps (which don’t actually have a header and so the technology built for the in-app environment is different). Like header bidding for apps, the core benefit of in-app bidding is that it flattens the traditional waterfall, allowing every demand source to bid for an available impression simultaneously in real-time. In doing so, the technology increases competition for available ad impressions, which in turn can lead to an increase in revenue.

The current waterfall setup with multiple instances based on a descending cost per mille (CPM), enables game developers to manually set up which ad network shows a particular ad and when. This means that ad networks and buyers bid for an ad in the order in which they are called, which is preselected by the developer. If managed correctly, this can be heavily optimized, but it requires a significant amount of operational overhead, can increase latency, and in some cases can lead to a potential loss in revenue, since a given buyer lower in the waterfall may have been willing to pay a higher price for a specific impression, but weren’t given the chance to bid.

However, LevelPlay which is custom-built for game developers, automates and democratizes this process, flattening the monetization waterfall by allowing ad networks and buyers to simultaneously bid on each available impression. This creates a level playing field for buyers and the potential for greater revenue for publishers.

LevelPlay’s in-app bidding solution brings multiple benefits to game developers who are looking for more efficient, transparent and cost-effective ways to manage their monetization activities. Custom-built for game developers, LevelPlay flattens the monetization waterfall by allowing ad networks and buyers to simultaneously bid on each available impression, creating a level playing field for buyers and the potential for greater revenue for publishers.

By automating the bidding process, LevelPlay also significantly reduces operations overhead costs for developers, removing the need to create and manage an optimized waterfall with multiple instances across apps and regions.

The technology handles simultaneous bids and supports an ecosystem that demands a high level of sophistication, granularity and automation. With this purpose-built solution comes the added benefit of a reduction in latency, reducing any unnecessary delays in the system.

Importantly, LevelPlay keeps control in the hands of the developer, with a hybrid solution giving them the ability to create a customized monetization model which combines both bidding and multiple instances.

“Running in-app bidding with ironSource’s mediation has been a really positive experience,” said Andrew Stone, CEO of Random Logic Games, in a statement. “During the initial test, our performance significantly increased and so we’re opening up bidding on more and more of our apps. The operations are much smoother, saving us time, and ultimately also money, in optimizing our monetization to the maximum.”

This launch comes at a time when the industry is can get the benefits of in-app bidding. The major software development kit (SDK) networks have developed their bidding solutions, ensuring that developers can start to transition to an in-app bidding environment without any potential loss in SDK-driven revenue.

In addition, in March this year, IronSource launched an A/B testing tool, empowering app developers to make strategic decisions on their monetization strategies, based off true comparative data. IronSource’s A/B testing tool allows developers to quickly and easily run A/B tests on their ad monetization strategy, including testing between in-app bidding and a traditional waterfall solution.

“It was critical for us that before launching LevelPlay, developers would have the technology to understand the impact of changing such a core part of their monetization mechanics through an A/B Testing Tool that would give them comparative insights, at their fingertips,” said Zuta. Now they can use data to test the effect of in-app bidding, allowing them to manage their monetization activities more smartly.”