What can an app publisher do today to make an immediate impact on monetization potential?

When we sit down with publishers to help them improve their revenue from video ad monetization, one of the first places we look is Use Rate, and for good reason: optimizing Use Rate has been shown to increase ad ARPDAU (average revenue per daily active user) and increase eCPMs. This means more revenue for the publisher at the end of the day.

What is it? Simply put, Use Rate is the percentage of daily active users of an app who are served at least one ad that day. This tells publishers how effectively they are reaching users with in-app ad monetization integrations.

To examine the effect that Use Rate has on publisher revenue, we compiled a mobile monetization study that examines:

Apps featured in the individual case studies include:

From the data collected, it is evident that increasing the ad Use Rate of an app:

For instance, in the chart below, we see how the daily earnings of a publisher of a social entertainment app rose and fell with the app’s ad Use Rate. 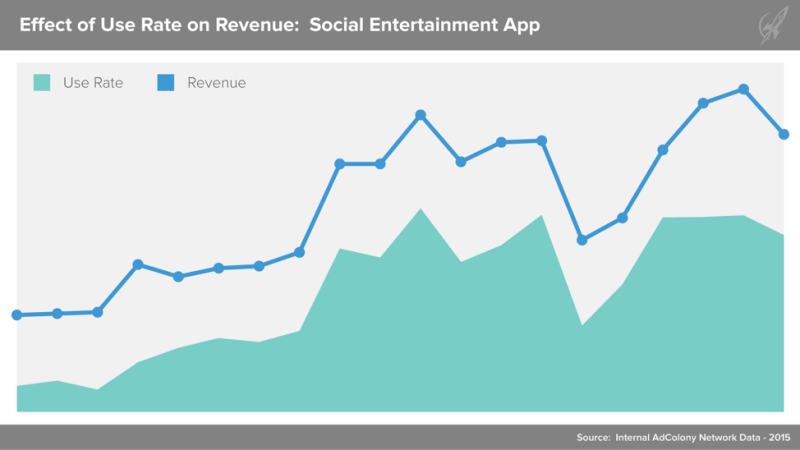 The study also found that the largest increases in ad monetization efficiency can be claimed by publishers who increase their ad Use Rate to at least 40 percent.

While it is clear that optimizing Use Rate is critical for any mobile app publisher looking to maximize their monetization strategy, many still struggle with correcting the causes of low Use Rates.

Once a low Use Rate has been identified, the next critical step is to determine the causes. After assessing the integrations for thousands of apps, we have found that low Use Rates are often caused by one or more of the following key factors, including:

While restrictive user segmentation is a fairly quick fix, ad positioning and timing may require more analysis to resolve. For instance, if ads are optional, are opportunities clearly visible, or are they lost below the fold or in tertiary screens and menus? Likewise, is the timing and frequency of ad requests appropriate for the average session duration, or might users exit the app before an ad is requested?

Use Rate and the User Experience

In so doing, the publisher is able to deliver more overall ad impressions without inundating a segment of its users. Furthermore, by exposing more unique users to ads, ad performance and eCPMs tend to improve, driving improved monetization efficiency. It’s a win-win for the publisher and the user.

Thus, the question is not whether Use Rate for a given app should be increased, but how. So, what’s your Use Rate?