Mozilla today announced plans to roll out Suggested Tiles, which push recommendations to users’ new tab page based on sites they have visited, to the Firefox Beta channel next week. The company promised beta testers will see tiles promoting Firefox for Android, Firefox Marketplace, and other Mozilla causes, but didn’t offer a full list of tiles for when the feature lands in Firefox’s stable channel “later in the summer.”

Suggested Tiles can promote Mozilla content (such as campaigns on policy issues), publisher content, or advertising. Relevance of the content to the user is based on a set of URLs that are related to a given category: When one of those URLs appears in your list of most frequently visited sites, Mozilla shows the content.

Suggested Tiles fall under Mozilla’s Directory Tiles program, which is designed to “improve the first-time-with-Firefox experience,” the company has said. Instead of seeing blank tiles when a new Firefox user opens a new tab, Mozilla thought it would be best that they see “content.” Now it wants to show tiles based on browsing history, meaning not just new Firefox users will see them.

Directory Tiles are basically sponsored content, and were Mozilla’s first initiative to bring advertising to Firefox users. Suggested Tiles go a step further since they are based on what sites users have visited, and that’s exactly what they when they’re told: “Suggested for wiki.mozilla.org visitors.” These tiles also only show up a fixed number of times before they’re automatically removed, Mozilla said, without sharing what that number is. 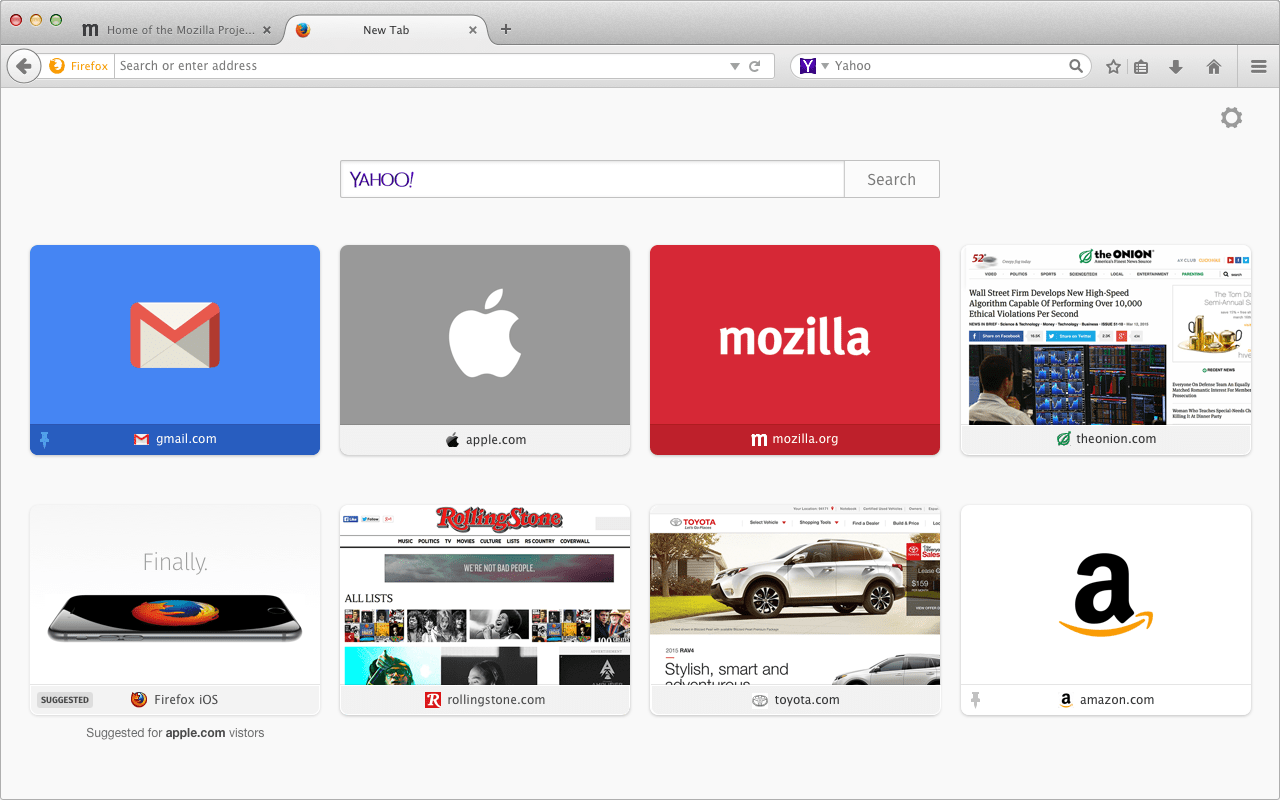 News of Mozilla’s plan to sell ads in Firefox first broke back in February 2014. In August, the company rolled out the feature to the Firefox Nightly channel, and in November, it arrived in the stable version of Firefox. “The next step is to scale these advances to the entire Firefox population,” the company said today.

The company also elaborated a bit more on its latest attempt to monetize Firefox:

Suggested Tiles is an advertising experience that delivers content recommendations that are relevant for the user in a transparent way while at the same time respecting their privacy, and giving them complete control over the experience. As a tester, you should be able to identify clearly what is promoted or sponsored content, understand why you’re seeing it, interact with it and be able to change your settings with ease.

That said, Mozilla said it is “not testing ad blocking add-ons with Suggested Tiles.” That means ad blocking tools will have to figure out the best way to handle this new form of advertising.

When you first launch Firefox, a message on the new tab page informs you what tiles are (with a link to a support page about how sponsored tiles work), promises that the feature abides by the Mozilla Privacy Policy, and reminds you that you can simply turn tiles off. If you do turn them off, you’ll get a blank new tab page and will avoid Firefox’s ads completely, including these upcoming suggested tiles.

Because delivering such content to Firefox users can result in privacy issues, Mozilla has taken three steps to limit what information it collects:

Mozilla is making a bold promise. “With Suggested Tiles, we want to show the world that it is possible to do relevant advertising and content recommendations while still respecting users’ privacy and giving them control over their data.”

That’s certainly a big statement, and while it’s certainly achievable, there will undoubtedly be a lot of confusion surrounding it. At the end of the day, Firefox getting more and more built-in ads should help generate revenue, but it won’t help reverse the browser’s market share problems.