Android remains the top ad revenue-generating mobile platform after moving into first place only last quarter, but Apple is still the champ in monetization potential.

So says the new Q2 report from mobile ad platform Opera Mediaworks on the State of Mobile Advertising, out today.

In other words: Android makes more ad money, but iOS generates 2.2 times its share of ad impressions in revenue. That is, more money per ad impression, helped in large part by the iPad and its large number of lucrative video ads. Tablets in general show a much greater video ad traffic and revenue share than smartphones.

Check out VB’s research Mobile marketing automation: How the most successful apps drive massive engagement and monetization
$499 on VB Insight, or free with your martech subscription

And, in fact, the gap between Android’s share of revenue — 47.7 percent — and iOS’s (47.2) is only about half a percentage point, while Android took 63.7 percent of ad impressions for the quarter, compared to iOS’s 21.7 percent. 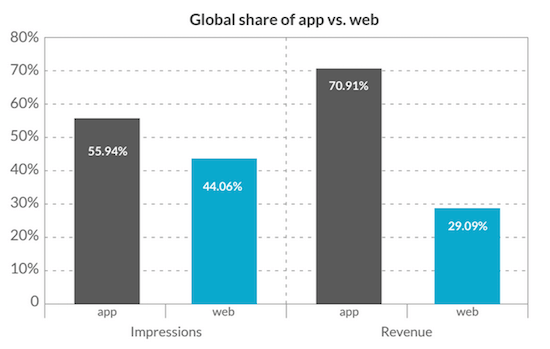 Above: From the Opera Mediaworks Q2 report on mobile ads.

The data comes from the Opera Mediaworks ad platform, which claims 90 percent of the top Ad Age global advertisers, over 1.1 billion unique users, and more than 19,000 sites and apps.